You know that oxygen-less zone that chokes life and forms every year in the Gulf of Mexico at the base of the Mississippi? Currently its about 3,300 square miles, or roughly the size of Delaware and Rhode Island combined. Over the last 50 years, humans tripled the nitrogen levels in Gulf. Nitrogen is often limiting for phytoplankton, but these increased levels cause a bloom. Although during the day phytoplankton produce oxygen, at night they respire stripping oxygen out of the water. When these phytoplankton die, bacteria also use oxygen to degrade them. 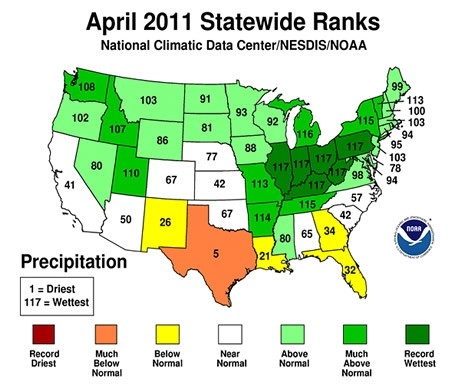 Earlier this year record amounts of rain fell throughout the Midwest and Southern United States. A month ago during these rains “the Mississippi River crested at 47.79 feet in Memphis, Tennessee, 13.79 feet above flood stage and the second highest level on record.” Because of this record amounts of water flowing in the river, the delivery of nitrogen to the Gulf will be much greater. DiMarco, a scientist monitoring the Gulf of Mexico dead zone, stated that 2011 dead zone could be the biggest ever.

Between the oil and now nitrogen it might be easier if we just nuke the Gulf and get it over with.