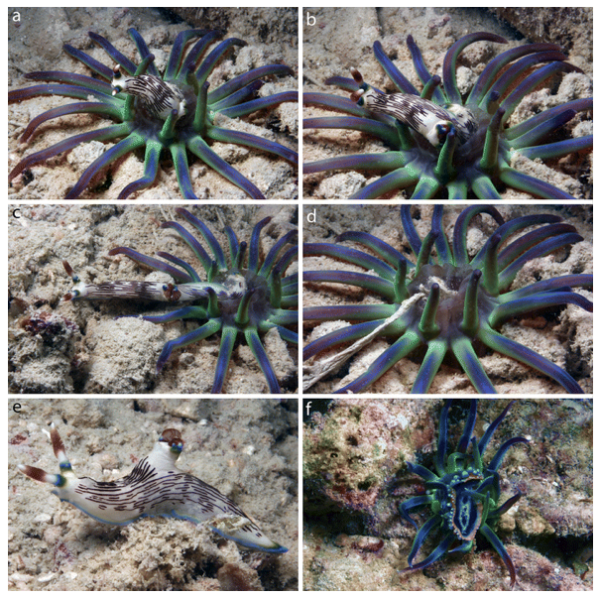 You may not realize that those unassuming slugs of the oceans, nudibranchs, are voracious predators in hiding.  Sponges, corals, hydroids, bryozoans, anemones, barnacles, the Portugese Man-O-War, and even other sea slugs will wind up in the digestive tract of a nudibranch.  Not even other nudibranchs, even if they are same species, can escape the eating fury of the nudibranch.  But one species is fighting back.

Crustaceans and fish feed on the nudibranch, but rarely does the nudibranch’s prey become its predator.  Off Malaysia, sea anemones are doing it for themselves.  Photos (above) were taken of the a reef-dwelling anemone, belonging to a species of the family Edwardsiidae, attempting to feed on a nudibranch of the species Nembrotha lineolata. The anemone was observed to have the nudibranch partially swallowed. This was before the slug was able to stretch itself to the surrounding sand and pull itself free. In another case, an anemone had a paralyzed or dead nudibranch in its tentacles.  The anemone was actively moving its tentacles in attempt to move the prey into its “mouth”.

We at DSN support anemones in their struggle against Molluskan domination. In honor of anemones, we dedicate the two following songs of rising above to you.