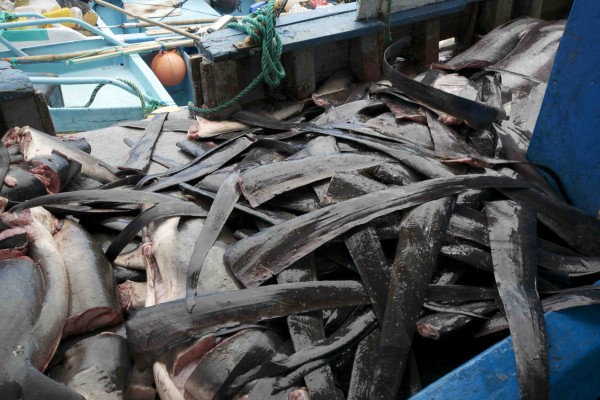 By now, you’ve probably seen coverage of the news from July 24 by MSNBC, and documented first-hand by my colleague John Bruno over at SeaMonster (What a marine massacre looks like), of the capture of a fishing vessel that was found illegally fishing sharks within the protected waters of the Galápagos Marine Reserve. The Galapagos National Park put out a press release regarding the incident as well.

As John briefly summarizes in words (using pictures to convey the real punch), he and his research team were assisted by the Ecuadorian Coast Guard to identify, sex, and measure each of the 379 sharks found on board. John sums-up the grisly work he and his field team were called-upon to perform,

“…it was one of the most depressing and intense days of my life. It felt like we were unearthing a mass grave in a war zone. The bodies of the sharks were literally coming out of a dark hold beneath the deck as if they were being unearthed.”


After a 10-hour effort to fully document the catch, the shark fins and carcasses (representing several near-shore and open-water species) were dumped overboard in front of three of the 30 fishermen who were arrested aboard the vessel.

I can’t imagine grinding through the long hours it took John’s team to process and document the catch. For a group of ocean scientists–so acutely aware of the precarious position global shark populations are facing from overfishing–the sight, smell, and reality of discovering this illegal haul in none other than the Galápagos Marine Reserve, one of the world’s most well-known marine protected areas, must have been jolting.

Imagine visiting the Louvre Museum to find the Italian Renaissance wing nearly empty of her collections and the museum toilets stocked with swatches from de Vinci’s Mona Lisa, Raphael’s St. Michael Slaying the Devil, and Mantegna’s St. Sebastian as toilet paper. I suppose that’s a fair analogy for what John’s team found aboard the captured vessel.

As heart-wrenching as this news from the Galápagos may be, I’m finding it difficult to muster shock and outrage on par with what I’m reading in some of the comments sections where this story first appeared. One SeaMonster reader comments, “It is very difficult to understand why anyone could do such a horrible thing.” Another asks, “Isn’t Sea Shepherd meant to be protecting the sharks of the Galápagos? This is why I donated to them in the first place what the hell is going on?” And amidst the many and varied trolling on display at MSNBC, comments seem to reverberate around demonizing the fishermen and how something like this could happen,

“It would have been appropriate to cut the arms off the criminals and toss them into the sea, along with their victims!”
“…how can these things just keep happening?”
“These idiots do not realize the untold damage to the system every species has its place in the balance of Nature How long can this go on before Disaster strikes There should be Life Imprisonment for these lowlifes.” [sic]


The truly unfortunate fact is that this news is neither new nor uncommon. And it is global.

Designation of any parcel of ocean “as protected”, formally or informally, is no guarantee of protection. The Galápagos National Park became a World Heritage site by the United Nations Educational, Scientific, and Cultural Organization (UNESCO) in 1978. In 1986, Ecuador established the Galápagos Marine Reserve, encompassing the 27,000 square miles of ocean surrounding the Galápagos Islands.

But the noble aims of the World Heritage status and marine reserve designation have proved more slippery and elusive than anyone imagined. Calling something protected is not the same as actively ensuring that protection is happening.

Many of the legal protections established for the Galápagos Marine Reserve exist on paper only—powerful competing interests often thwart their enforcement. The archipelago’s marine bounty has attracted poachers who are not deterred by the area’s protected status. Mainland and foreign fishing interests illegally target marine life within the reserve, going after sharks (for their fins) and sea cucumbers.

The National Park staff is occupied with monitoring tourists, who are appearing in increasing numbers, drawn by photographs showing the islands’ stark beauty and by reports of the curiously docile wildlife with whom close yet relatively safe encounters are possible. Since 1991 the number of visitors has soared from 41,000 a year to more than 160,000. The local population has grown by four percent every year and now numbers more than 40,000. Human visitors over the centuries have brought invasive species with them, most significantly goats, dogs and rats, which have depleted or made extinct a number of endemic plant and animal species.

Conservation efforts have been so eroded by these threats that in 2007 UNESCO designated the Galápagos Islands a World Heritage Site in Danger. The islands continue to be in need of help. In 2007, the Sea Shepherd Conservation Society stepped in to fill that void and assist the Ecuadorian Environmental Police in busting a major shark-fin cartel based on the Ecuador mainland. Sea Shepherd also partnered with the Galápagos National Park to hound poachers within the Marine Reserve and confiscate or destroy their gear and vessels. However, Sea Shepherd’s direct-action activities ground to a halt in 2008 when their vessel fell into disrepair. Even after an overhaul, the ship has no crew and (to my knowledge) remains anchored in the harbor on Santa Cruz Island.

So while we appear to be getting better at establishing legislative protection for sharks, where the rubber hits the road is in the enforcement of that protection. And enforcement takes funding, training, monitoring, consequences, public awareness, and a judicial process prepared to prosecute. Expecting open water to somehow police itself is as realistic as expecting a bank to safeguard its holdings without surveillance, guards, and a prosecutorial system.

And what about those fishermen? Don’t they know better? Elimination of sharks can have unpredictable and potentially disastrous effects further down the marine food chain. What happened to informed self-interest?

You and I get that fishing a low fecundity, slow growth, slow to reproductive maturity, supply limited species is a formula for ecological and economic ruin. But what are the options? What will fill the revenue void for fishers if all shark finning was banned globally tomorrow? What sustainable fisheries trainings are being offered? And if no sustainable fishing alternatives are available, what alternative livelihoods are nations prepared to present? However stomach-churning the reality, waste, and short-sightedness of shark finning may be, I refuse to believe that all fishers engaged in the process are mindless savages bent on pursuing personal fortune. Perhaps some of them know what they are engaged in is an utterly unsustainable enterprise. But again, what does their option and opportunity landscape look like?

I don’t have answers to these queries. And I am NOT presenting an argument for shark fisheries. The nature of most pelagic and in-shore species simply does not present compelling evidence for sustainable harvest. And what evidence that exists is pretty thin. But I have met some of these shark fishers in the field and they don’t match their demonized characterization. I recently encountered news from the field of a village that was trading a bag of dried shark fins harvested from reef sharks just offshore (with a conservative market value of US$1000) for a sack of granulated sugar (approximately worth US$150-$200). These villagers are not monsters. They’re people living near subsistence lives who lack the context of, and appreciation for, the value of living sharks on their reefs.

But while the arc of history of our ability to adequately manage ocean resources is long, it’s [slowly] bending towards justice.

Perhaps my favorite comment on the grim news from the Galápagos came from Scott Henderson, a shark expert and director of Conservation International’s Eastern Tropical Pacific Seascape program. In a blog post he wrote, Henderson chose to frame the Galapagos incident in a rather less depressing light,

“What is newsworthy about this story is that targeted shark fishing is illegal in Ecuador, and all kinds of shark capture in Galápagos are forbidden. Yet despite their limited resources, the Galápagos National Park Service — with the staunch support of the Ecuadorian Navy — managed to chase down a relatively large commercial fishing vessel with a medium-sized speedboat and force the vessel back to port for a thorough, well-documented and transparently reported inspection and judicial process.

The pressures on the park service to turn a blind eye to such illegal activities and let vessels involved in them slip away undetected, or unapprehended, are immense. Yet a transformation has occurred in Galápagos; protecting sharks, not sitting idly by and watching them systematically eliminated, is now business as usual for both the park and the navy. Virtually no one recognizes the park service for this dedication, which in the past has led to gunshots and wounded park guards.”

While recognizing his assessment doesn’t offer a way forward in assisting fishers in sustainable livelihoods, we can still take Henderson’s words at face value and see this sad Galápagos tale transformed into promising news for increased enforcement capacity. Here’s hoping that future enforcement stories aren’t accompanied by such a disturbing post mortem.

17 Replies to “Contextualize Your Outrage”