Unlike the blown out Macondo well, scientific data surrounding last year’s oil spill has been coming out in a painfully slow trickle.

As the oil started flowing, scientists soon realized the unprecedented opportunities arising from the Deepwater Horizon catastrophe.   Samples collected at the gushing wellhead are now providing new insight into the transport and ultimate fate of oil spilled at immense depths.  In a recent PNAS paper, Reddy et al. (2011) describe the composition of two samples directly collected from the submerged source of leaking oil.  In June 2010, an ROV captured crude hydrocarbons in a sealed container, sampling just above the 4th incarnation of the laughable Top Hat device (at least it was good for something in the end, right?).  These samples have provided the ultimate fingerprint of Macondo well oil, and serve as a basis of comparison to oil subsequently collected from other locations.

The composition of the MW-1 oil fraction contained 74% saturated hydrocarbons, 16% aromatic hydrocarbons, and 10% polar hydrocarbons. Along with other results, these data are consistent with a moderately mature, light sweet crude oil, with no evidence of subseafloor biodegradation. The polar fraction (10%) is comprised of molecules containing oxygen, nitrogen, and sulfur spanning a wide molecular weight range. Many of these compounds are resistant to evaporation, biodegradation, and photolysis. Hence, they have the potential to remain in the environment long after other oil components have been removed or degraded. Because many of these polar compounds are not typically analyzed in field samples, the resulting 0.41 million barrels of polar hydrocarbons released into the Gulf of Mexico may be overlooked in studies examining the fate of oil released during this spill.

So the oil coming out of the wellhead was great quality ($$cha ching$$ for BP before the blowout), but this batch of crude also contained some polar hydrocarbon compounds that no one seems to have been tracking because they didn’t know they were there.

Tracking oil is tricky stuff.  Crude oil has been buried and sealed in its subsurface tomb for millions of years; once released by human technology, it immediately begins a chemical transformation.  The liquid spewing from the failed blowout preventer was not the same oil that reached the surface.   At depth, the petroleum mix split into four distinct partitions: gas, liquid oil, components that dissolve in water, and a solidified hydrate phase.  Depth and temperature determine the interaction between these phases, as well as the specific phase adopted by individual hydrocarbon compounds.  A great figure in Reddy et al. (2011) shows this transformation in action: after emerging from the well, the fingerprint of Macondo oil jumped all over the map, morphing widely across both time and collection methods. 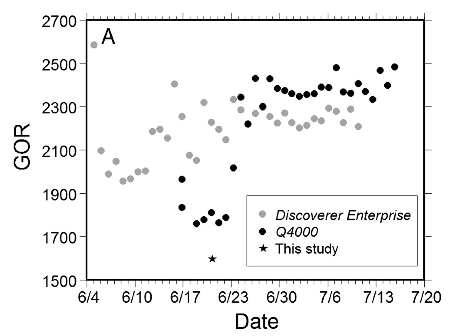 Deepwater Horizon. The very name of this spill grants an ominous reminder that we have indeed entered a new era of purging the earth’s resources (no matter how inaccessible they seem to lie).  The Reddy et al. study importantly notes that a leaking well at 5000 feet provides the right conditions for oil to linger below the surface.

Water-soluble oil components (methane and light aromatic hydrocarbons) were selectively retained in the deep-sea, forming that infamous ‘subsurface plume’ at 1100 m depth. Awesome news. Methane was by far the most abundant compound entering the plume, with only 0.01% ever reaching the sea surface.  Similar story for benzene, ethane (9% reaching surface), and propane (22% surfacing).  Oh and I forgot to mention that dispersant compounds (remember how injecting dispersants at the wellhead was such a good idea?) such as dioctyl sodium sulfosuccinate are also water soluble and happily joined into the deepwater plume party.

Reddy et al. calculated that plume-forming compounds represented 2.2% of the oil in their ‘best’ MW1 sample (what they believe is the most accurate chemical fingerprint of Macondo well oil).  They also noted negligible degradation in their previous measurement of the oil plume (not much biodegradation of compounds travelling 27km in 4 days last summer), estimating that plume compounds in the deep-sea had a half-life approximating 1 month.  Given the final government estimate of 4.1 million barrels spilled oil, that equates to 90,200 barrels of water-soluble hydrocarbons trapped in a deepwater plume.  Meaning its probably taken the better part of a year for these floating subsurface compounds to break down.  I’m no expert, but I don’t think a year of benzene exposure is good for ANYTHING…

Details of biological impacts have so far been patchy – although some recent good news reported that fishing closures may have actually increased fish stocks during 2010 (Fodrie & Heck 2011).  As we get a more complete picture regarding the transport and fate of spilled oil, we can start to look closer at the most heavily impacted ecosystems.  I suspect the deep-sea will unfortunately be one of these areas.

Reddy CM, et al. (2011) Composition and fate of gas and oil released to the water column during the Deepwater Horizon oil spill. Proceedings of the National Academy of Sciences. doi:10.1073/pnas.1101242108

2 Replies to “CSI Macondo: Fingerprinting the oil that got away”