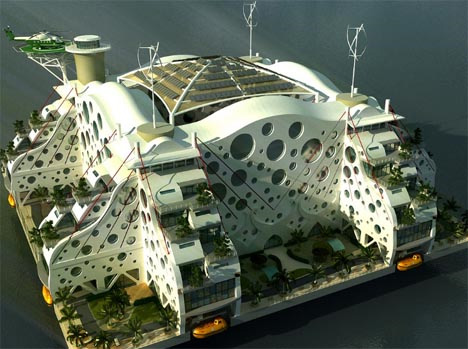 By now you probably realize that we here at DSN are more than ready to burn our terrestrial dwellings down in favor of living among sea creatures in some oceanic utopia.

To our list of potential inhabitable salty structures comes a venture from Peter Thiel. Thiel is founder of PayPal, a Google Engineer, and a former programmer for Sun Microsystems. In 2009 with $500,000 of Thiel’s money, The Seasteading Institute wasl launched and dedicated to “creating experimental ocean communities with diverse social, political, and legal systems.” As Wired puts it, “A permanent, quasi-sovereign nation floating in international waters.” You can read the full Seastead Manifesto by Patri Friedman and Wayne Gramlich, founders of the institute.

In 2009 The Seasteading Institute sponsored a design contest. “The contest asked for designs that imagined permanent, stationary structures that would allow for long-term ocean living.” Web Urbanist has photos of the five top entries. I found it difficult to pick a single favorite but I am tending toward the Oasis of the Sea design (above). Vote on your favorites in comments below