Here we go again. Follow the link (or click image below) for special report by KTVU TV, Oakland, CA. 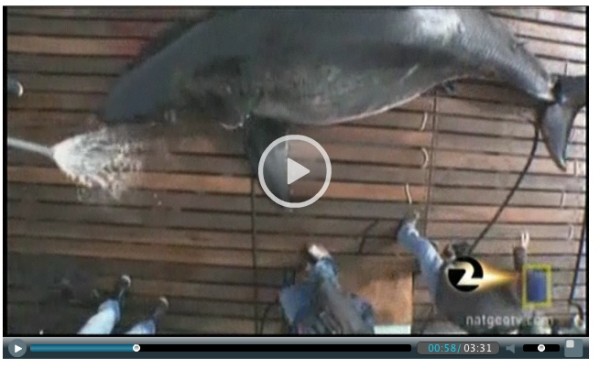 For the full online chatter on the Michael Domeier White shark tagging saga, you can’t get any better analysis than Mike Neumann’s blog. See also here, and here.

David Shiffman has also contributed here, here, and here to the discussion over on Southern Fried Science.

My 2 cents: If White shark populations are suffering such a precipitous decline, then research should be conducted to empirically establish causality. And for fast, submerged, wide-ranging mega-predators, tagging and remote sensing may be the only way to gather that data. But this hook, drag, land, and drill protocol for SPOT tagging Farallon White sharks appears maximally invasive and potentially lethal.

White sharks are a CITES Appendix II-listed species–considered not necessarily threatened with extinction, but may become so unless trade in specimens is subject to strict regulation. I suspect that middle-of-the-road assessment was arrived at by the usual CITES loopholes that the species is too data-deficient to warrant a higher listing. Arguments for stronger international protection, for instance CITES Appendix I listing, will be built on the back of solid data. But how do we temper the need to conduct research on data-deficient species without endangering that species in the process? And is this research protocol the best that we can devise considering the study subject, or is it more an artifact of making visually compelling television?