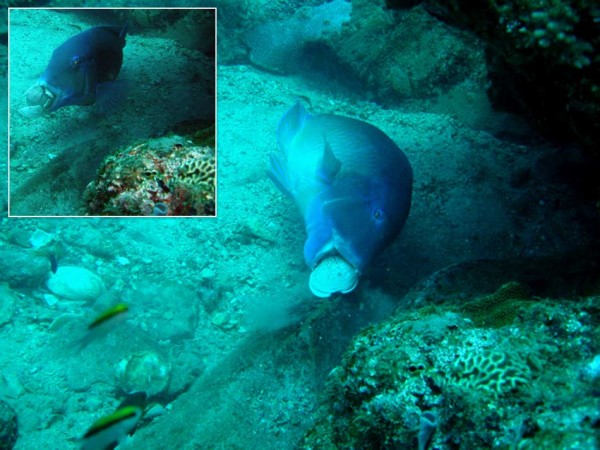 When I was in college, I had fish in aquarium.  I repeatedly tried to train them to retrieve a beer from my dorm fridge, open the bottle with an opener, and fin it to me.  Sadly after several hours of me miming instructions and elaborate PVC piping spanning between the aquarium, my couch, and the fridge, success was never obtained. Apparently, I was using the wrong species of fish.

Professional diver Scott Gardner captured photos of a a footlong blackspot tuskfish using a tool on the Great Barrier Reef. This fish would wack a clam in its mouth against rock.  When the clam broke open the fish consume the slimy soft parts.

The tuskfish caught on camera was clearly quite skilled at its task, “landing absolutely pinpoint blows” with the shell, Brown says. A scattering of crushed shells around its anvil rock suggests that Gardner didn’t just stumble upon the fish during its original eureka moment. In fact, numerous such shell middens are visible around the reef.

2 Replies to “Tool Use In Fish”