Sometimes I think that those of us studying ‘minor phyla’ do so in order to prevent from developing some secret (potentially peverse) obsessions. Example: I recently attended the Society of Nematology’s 50th Anniversary meeting, where the plenary topic was….traumatic insemination. This was the subsequent topic of conversation for the next four days.

“Have you tweeted about it yet?”

Trouble is, I wasn’t actually at the plenary. I was slated to arrive fashionably late to the conference (is there any other way to arrive, dahhling?). After hearing about something so incessantly, for so long, you begin to get a little curious. Come to think of it, that’s how my Justin Bieber obsession started.

Nematologists love to talk about nematode sex. Copulatory plugs, genital spicules, pronged gubernaculum. Traumatic insemination isn’t the only reproductive method practiced by nematodes, but it sure is a memorable strategy.

Io9 had some hilarious insight earlier this year:

A google image search of “Traumatic Insemination” turns up bed bug photos, a Dolce & Gabbana advertisement (I agree that some of their designs are rather traumatic), and this insanely hilarious comic:

So, in a nutshell: Male wriggles up to female, stabs her body tissue with a hypodermic needle full of sperm. The victimized female then has the ridiculous ability to move this sperm towards the reproductive organs and use it to fertilize eggs. Or, if a couple of males do this in succession (stab fest or gang rape?), only the last male gets his sperm delivered—loser sperm gets shunted to the intestines and digested.

If you’re not disturbed by now, just wait. It gets worse. Coomans et al. (1988) describes this process in great detail for the nematode species Oncholaimus oxyuris:

The male apparently senses the female with its hind part. When a female passes by at a short distance from the posterior body region of the male, the latter moves violently towards the female and tries to pinch or seize that part of the female’s body that is closest by. The male uses its genital setae and ventral tail papillae as a pair of tongs. Any part of the body can be seized (Coomans et al. 1988). 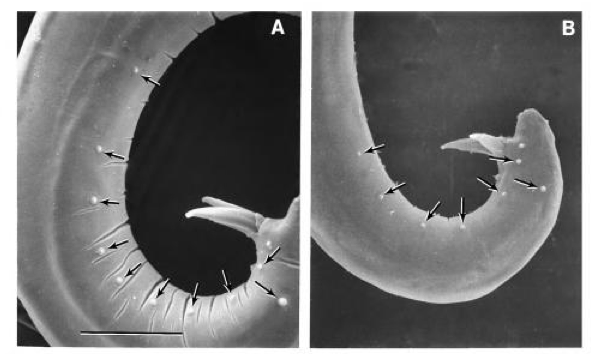 The males aren’t even trying to get it in the right place. Or target the correct sex.

A copulation within the vicinity of the vulva has been observed only once. On some occasions the spicules [male reproductive organs] were inserted in the anus or the body wall was punctured pre-anally…frequent copulation attempts between males were observed in cultures with a high density of males…(Coomans et al. 1988)

And then they certainly take their time with this painful-sounding process:

During one to several (usually about 10 but up to 20) minutes, the spicules are moved separately to and fro, forming a rounded or irregular pore and a funnel-shaped subcutaneous cavity. Then follows a resting period during which the spicules are immovably anchored with their tips inside the pore and both partners are almost motionless….the [male] secretion enters the female though the copulation pore, followed by the sperm that are injected into the female during 2-4 subsequent ejaculations. After this there is another resting period, lasting up to 20 minutes, before the male withdraws its spicules and the female is freed from its grip. A would plug can be recognized above and around the copulatory pore of recently inseminated females (Coomans et al. 1988).

After traumatic insemination, an ‘interstitial channel’ forms in the female’s epidermal tissue which then guides the sperm towards her reproductive ducts. Females can also whip their tail to physically assist in this process. Nematodes aren’t the only group which use this reproductive strategy – bed bugs (family Cimicidae) ONLY mate by traumatic insemination, and it additionally occurs in rotifers, flatworms, and snails (Arnqvist & Rowe 2005).

Personally, I don’t think the apparent popularity of traumatic insemination makes it any less disturbing.

2 Replies to “A great day for a little Traumatic Insemination”