We would be remiss at DSN if we didn’t blog about a paper that was brought to our recent attention.  Warning the following material uses profanity with high frequency. Click the more button on your own risk.

An distinguished paper from 198-fuckin-2 was brought to our attention recently. As so astutely pointed out on twitter, this is probably the only academic paper in existence that use the phrase “coe-fuckin-locanth”. Thus, making this paper epic and worthy of  frank, academic discourse on Deep Sea-Fuckin-News.

What the author is trying to say about metrical theory and prosodic is . . . honestly I have no-fuckin-clue. Here is what McCarthy has to say about it though:

An analysis of English Expletive Infixation (as in fan-fuckin-tastic) in terms of a metrical theory of prosody is presented. It is shown that the major environment for Expletive Infixation – immediately before a stressed syllable – follows from independently motivated characteristics of this theory.

According to Wikipedia, Metrical Phon-fuckin-ology has to do with how syllables are stressed in a phrase. The strength of the syllable is defined relative to other syllables in the same phrase. This appears to be independent of pitch, accent and other factors that can be cultural. But let us reflect on the tempo and mode of expletive infixation among sailors and marine scien-fuckin-tists.

You undoubtedly have heard the phrase “swearing like a sailor”. Maritime culture has a long-fuckin-tradition of cursory vocabulary. Sailors and cuss words go hand in hand. Marine scien-fuckin-tists are really just sailors who pine for the open ocean, but don’t have the balls to go through basic training (or, consequently, were once sailors who wanted to stay committed to the sea). We tend to identify with the culture rather closely through loud singing, copious drinking and all night long cussing matches about politics and hard-fuckin-ships. 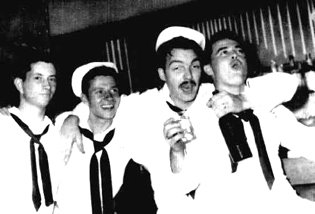 Craig, Al, Rick and I in our younger days...