In my last post about my voyage on from Hawaii to California this summer, Wil asked what it was like to be at sea for month. I said:

To me, one of the best feelings in the world is watching the land vanish on the horizon, knowing that I won’t see it again for a month. I love blue-water sailing and I love the North Pacific Subtropical Gyre ecosystem and I get excited every single time the plankton net comes out of the water. There are so many wonderful creatures out there and you never know what you’re going to catch – iridescent blue sea slugs, jellyfish the size of your fist so transparent that you can barely see them even when you know they’re there, a vast swarm of millions upon millions of mottled brown amphipods…

But I didn’t tell you the very best thing we caught this summer, because I’ve been saving it for this post. About 1000 miles north of Hawaii, we were doing our standard midnight neuston tow and something wonderful and special popped out of the cod end of the net. Paper nautiluses!

When I saw these adorable little cephalopods, I got so excited that I did a little dance in the wet lab, then couldn’t go to sleep (it was 3 AM) until I figured out more about them. Unfortunately, there is no better testament to my crazed and sleep deprived state than the fact that I did not take a single photo or video of them – I’m not much of a documentarian at the best of times, and apparently I was too busy ransacking the lab for information on their taxonomy. I’ve been kicking myself for a month.

My mind was blown when I discovered that paper nautiluses (you can also pluralize nautili but I think that looks a bit silly) aren’t true nautiluses – they are free-swimming octopuses. The nautilus name comes from the fragile white shells that the females secrete in order to carry around their eggs. Because they’re not related to true chambered nautiluses, paper nautiluses are also called argonauts, after their family name Argonatidae, which is of course named after the famous Greek sailors. To avoid confusion with the true nautiluses, I’m going to refer to them as “argonauts” from now on.

Despite my lack of photos, I can tell you that our argonauts looked pretty much like the above photos (from the Tree of Life project’s great page) only without their shells. Argonauts are not attached to their shells, but hold onto them with two special webbed tentacles. Getting caught in a net is a pretty nasty experience, and I suspect the force of the water must have pulled the shells away from our argonauts. You can see how argonauts hold into their shells in the above photos. The left photo shows the arm web extending over the shell (you can tell because of the brown photophores (color-changing organs)), and the right photo shows the shell with the arm webs retracted. 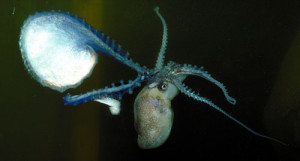 Female without a shell spreading her arm web spread out on the glass of an aquarium. Photo: © R. Kuiter

It’s thought that argonauts use their shells for two purposes. First, the shells help the argonauts swim – they tuck a small air bubble inside to maintain neutral buoyancy. Secondly, like their benthic octopus cousins, argonauts must attach their egg masses to a surface, so the females tuck them up into the shell until the babies hatch into free-swimming larvae.

Life is completely different for male argonauts – they are dwarfs and have no shells. But they make up for their lack of stature by having a hugely hectocotylized arm. If Hectocotyli himself hasn’t already informed you, a hectocotylized arm is basically a detachable penis. It can grasp sperm packets, slip under the female’s mantle, and then break off to stay with her for quite some time. One argonaut female was captured with no less than three hectocotyli tucked sweetly under her mantle. Awwww!

I think the pretty ladies we caught were Argonauta argo but since the samples have gone to live with SEA in Woods Hole, I’m not entirely sure. I’ve been promised photos of the preserved specimens, and I’ll post them when I get them.

This is why I love going to sea. The absolute thrill of catching these beautiful animals, of seeing them alive and changing colors from white to pink to purple, and then of learning all about them was one of the highlights of my scientific life. And next time I’ll be sure to get video, damn it.

UPDATE 23 Aug: Danna Staaf of Squid A Day also caught an argonaut at sea, and got sweet video! She’s edited it with a nice explanatory voiceover. Watch it right now because it is awesome!

4 Replies to “Flight of the Argonauts”