Last week I got back from a 97-mile backpacking trip through the southern Sierra Nevada mountains in California. We started at Bishop Pass and hike south over Mt. Whitney (the highest point in the 48 contiguous states – woo!). The terrain was beautiful, with granite peaks plunging to flower-strewn meadows and gurgling, clear streams, and the hike itself pleasingly challenging, despite my initial altitude sickness. I admit, I’ve probably made poor lifestyle choices when everything I do for work and fun – going to sea, backpacking way up high – makes me throw up. Oh, well. 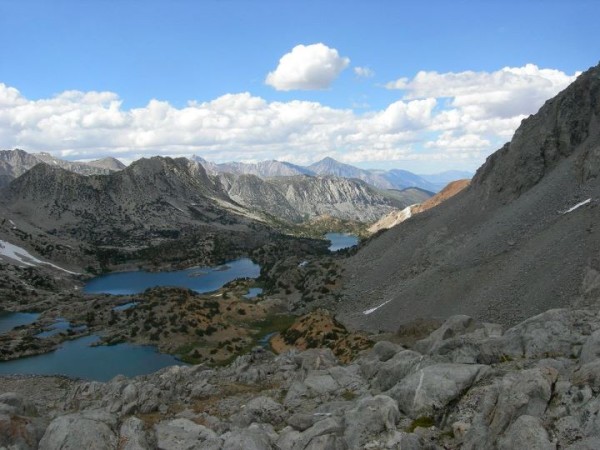 The view from Bishop Pass. It was a nice place to toss my cookies.

Once I got over the altitude sickness and the adjustment to carrying 40+ pounds around on my back (9 days of food in a bear canister and no, I do not go in for this ultralight business, I like to be warm and well fed), I realized there was something very wrong amongst the stunning scenery. The nights were silent. The frogs are gone, driven extinct by the virulent fungal disease chytridiomycosis.

Being relatively new to the Sierras, the only reason that I knew about the missing frogs is because I had attended a talk by frog biologist Vance Vrendenburg a year or two ago. This depressing figure from his 2010 PNAS paper stuck firmly in my mind. Green is healthy, non-infected frog populations, yellow is infected, and black is gone. In five short years, the frogs in these three lake basins just…wink out. 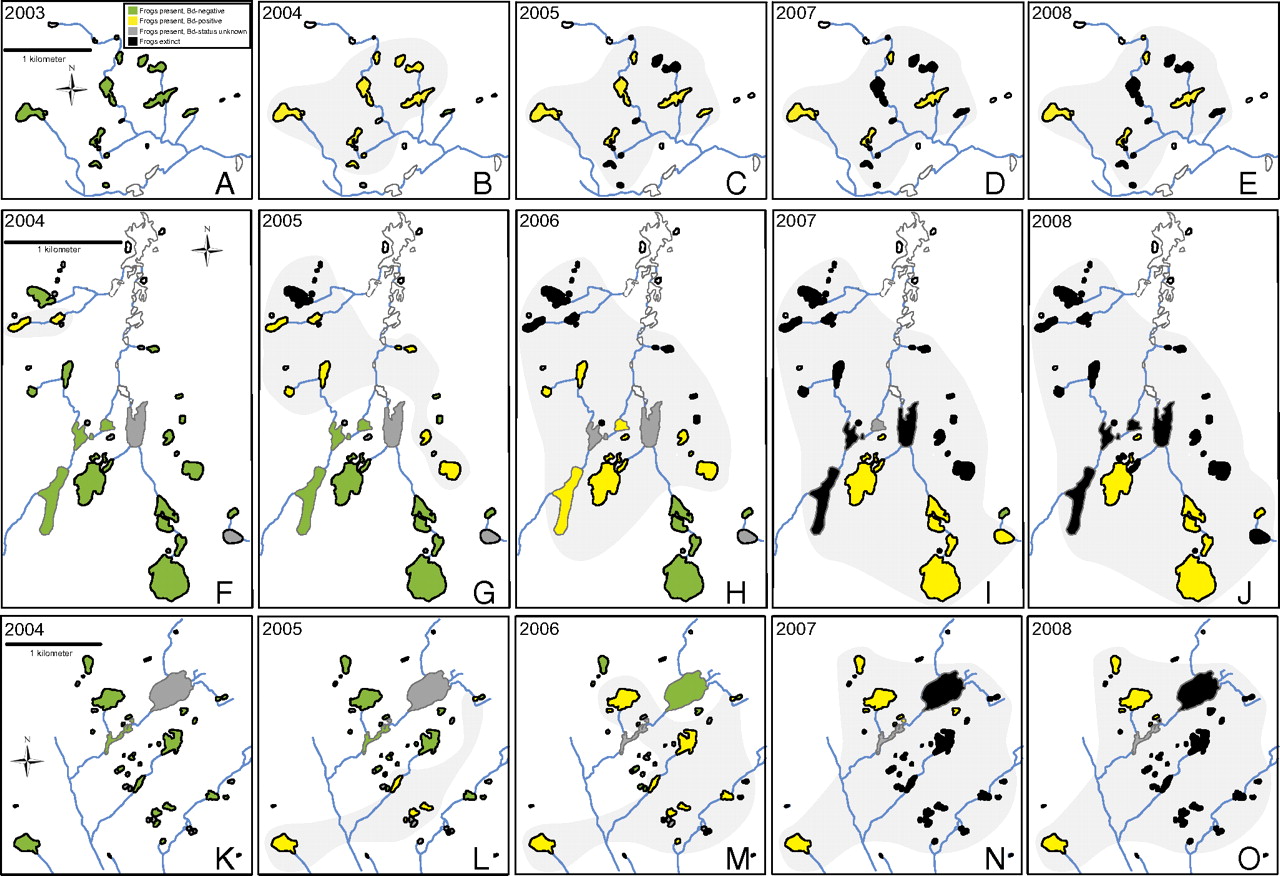 Vredenburg is working on a method of inoculating frogs against the fungus, but in the meantime there are very, very few frogs in the apparently pristine Sierra wilderness. Once you notice the silent, empty lakes, it is like being surrounded by tiny hopping ghosts.

So why I am writing about this in Deep Sea News? First, because it’s a classic example of shifting baselines. My hiking companions did not know there were supposed to be frogs, and so didn’t miss them. We see this all the time in the oceans, with salmon and sharks and coral. When you don’t know the context, it is entirely possible for huge parts of our ecosystems to vanish without even a whimper.

Secondly, because it illustrates the limitations of simply protecting chunks of land or sea without addressing other causes of environmental decline. The parks where I was hiking, Kings Canyon and Sequoia National Parks, have been under protection for 100 years, but that alone cannot stop the frogs from dying from chytrid or the pikas dying from climate change. And part of the frogs’ problems stemmed from the park itself introducing non-native trout for recreational purposes.

But mostly, I wanted to echo New York Times columnist Nicholas Kristof’s recent column on the glory of our national parks. He was apparently noodling around in Oregon while I was in the southern Sierras, and wrote:

Conservationists need to expand their focus from preserving nature to encouraging the public to experience it. The only way to protect wilderness in the long run is to build a constituency for it, to grow the number of people who revel in camping under the stars (I’m not a fan of tents!), Americans who accept mosquito bites as a cheap price for some of the world’s freshest air.

Kristof is apparently more hardcore than me – I can’t see the stars without my contact lenses anyway and I like sleeping in my warm, mosquito-free tent – but mostly, YES. People always tell me that I’m living their dream with getting to go to sea for work, and I mostly think that their dream is not actually to spend 3 or 4 weeks feeling slightly nauseated doing repetitive physical work on a moving concrete deck with no beer. I think what people actually want is to get away from electronics, to experience nature closely, and to feel far away from human society. With a $25 permit, some training and a one-time investment in gear (this is not cheap, but then you’re all set for years) everyone can do this. I saw better stars from Dusy Basin and Mather Pass than 1,000 miles out to sea.

I doubt that many people in the southern California megalopolis, which sucks up most of the Sierras’ water, know that 99% of the frogs up there are dead from a virulent plague – but haranguing southern Californians about environmental issues is notoriously ineffective. After all, we are the people who grow vast green lawn  in the middle of a desert. To stop more species from winking out like the frogs, people need to be lured by love. I encourage everyone to get out there, go for a swim in those pristine-looking, silent lakes, and come back refreshed and disturbed. It may be the prettiest place you’ve ever been…but know there should be frogs. 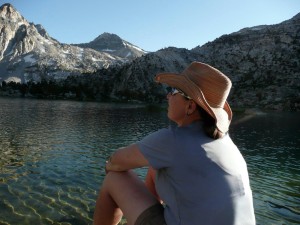 Me at Rae Lakes, possibly the most gorgeous place on a gorgeous trip. We spent all afternoon crossing ponds and streams and lakes in the valley below, but no frogs.

4 Replies to “Silence in the Sierras”