We’ve known each other for several years now and you know that I love and respect you and your terrific blog, Laelaps on Wired Science. But I am concerned about your scathing review of “dubious” research that hasn’t even been published yet. You see, Brian, our readers (and our writers) are fascinated with the ocean and obsessed with giant sea creatures. Especially if they menaced mega sharks. When you go out there and debunk research before its even hit the presses, what are we left with?

There is no direct evidence for the existence of the animal the McMenamins call “the kraken.” No exceptionally preserved body, no fossilized tentacle hooks, no beak — nothing. The McMenamins’ entire case is based on peculiar inferences about the site. It is a case of reading the scattered bones as if they were tea leaves able to tell someone’s fortune. Rather than being distributed through the bonebed by natural processes related to decay and preservation, the McMenamins argue that the Shonisaurus bones were intentionally arrayed in a “midden” by a huge cephalopod nearly 100 feet long. (How the length of the imaginary animal was estimated is anyone’s guess.) But that’s not all — the McMenamins speculate that his “kraken” played with its food:

The proposed Triassic kraken, which could have been the most intelligent invertebrate ever, arranged the vertebral discs in biserial patterns, with individual pieces nesting in a fitted fashion as if they were part of a puzzle. The arranged vertebrae resemble the pattern of sucker discs on a cephalopod tentacle, with each amphicoelous vertebra strongly resembling a coleoid sucker. Thus the tessellated vertebral disc pavement may represent the earliest known self‑portrait.

Broken dreams and empty hearts, man. In your ambition to be a leading paleontological blogger and science writer have you forgotten where you came from? Where is the inner child that was awed by ferocious, nonevidence-based drawn Triassic horrors of the deep? Where is the little Switek that didn’t demand rationality when reading comics of giant, tentacled Kraken with a mouth full of razor sharp teeth descending upon mankind?

You’ve changed, man. But don’t go out there on the internet and ruin it for the rest of us with your *facts* and *arguments* and accumulated knowledge through years of researching stuff. Deep Sea News readers still have their imaginations and we intend to keep them.

But what really kills me about this story is the fact that no reporter went to get a second opinion. Each and every story appears to be based directly off the press release and uses quotes directly from that document. No outside expert was contacted for another opinion in any of the stories — standard practice in science journalism — and, frankly, all the stories reek of churnalism. […] You don’t have to be a paleontologist to realize that there’s something fishy about claims that there was a giant, ichthyosaur-crunching squid when there is no body to be seen.

Warmest tentacles, Kevin and the staff and readers of Deep Sea News

p.s.-GIANT KRAKEN MYSTERIOUSLY MAKES SUSHI ART OUT OF PLEIOSAURS!?!?! OMG THIS IS FULL OF WIN!!
p.p.s.-this needs to be a youtube short film btw 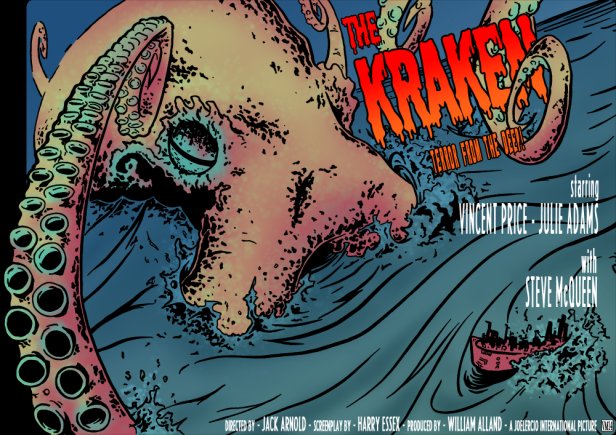 12 Replies to “An Open Letter To Brian Switek”