About six months ago, University of Hawaii scientists Nikolai Maximenko and Jan Hafner mapped the likely route of debris dumped into the ocean by the March 11 Japanese tsunami. Just last week, a Russian sail training vessel used their maps to find the debris field. Since the North Pacific is really, really big – over three times the size of the United States – how did they do it?

The tsunami debris map above is a mathematical model, but it has a basis in the real world – it’s based on the paths taken by thousands of freely drifting buoys. The Global Drifter Program (GDP) currently tracks 1,037 of these buoys throughout the world’s oceans, and explains their design like this:

The modern drifter is a high-tech version of the “message in a bottle”. It consists of a surface buoy and a subsurface drogue (sea anchor), attached by a long, thin tether. The buoy measures temperature and other properties, and has a transmitter to send the data to passing satellites. The drogue dominates the total area of the instrument and is centered at a depth of 15 meters beneath the sea surface.

The drifters are easily deployed off any ship – you just toss them overboard (I’ve done this! It’s fun!) – which makes them a relatively inexpensive way of getting a lot of information about how the ocean’s surface moves and changes. All this information can be incorporated into mathematical models of how drifting objects move through the ocean, making these models more accurate. Drs. Maximenko and Hafner used this data to create the Surface CUrrents from a Diagnostic model (SCUD), which incorporates real-time satellite data and drifter tracks to predict how tsunami debris will move across the Pacific. 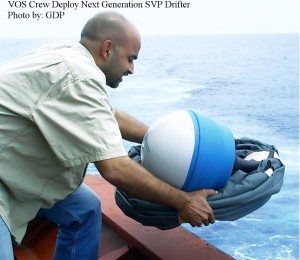 However, a drifting buoy with a 45-foot sea anchor is going to move pretty differently than tsunami debris that contains everything from cars to boats to the contents of people’s houses. That’s why it’s very important to test these models in the real world. Fortunately, the STS Pallada, a Russian sail training vessel going from Hawaii to Vladivostok, had Maximenko & Hafner’s debris maps and kept a eye out for tsunami debris. (The nonprofit organizations Algalita & 5 Gyres are also mounting an expedition to find the tsunami debris, scheduled to depart in May 2012). 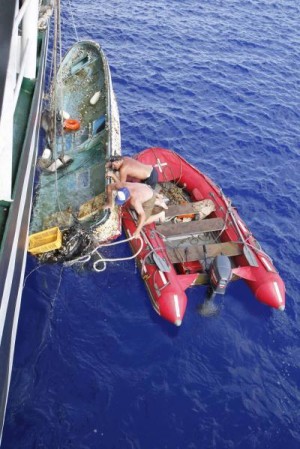 Here’s what the crew of the Pallada found. From the UH press release (PDF):

“Yesterday, i.e. on September 22, in position 31 042,21 N and 174 045,21 E [about 700 miles northwest of Midway], we picked up on board the Japanese fishing boat. Radioactivity level – normal, we’ve measured it with the Geiger counter,” writes Natalia Borodina, Information and Education Mate of the Pallada. “At the approaches to the mentioned position (maybe 10 – 15 minutes before) we also sighted a TV set, fridge and a couple of other home appliances.”

Later, on September 27: “We keep sighting every day things like wooden boards, plastic bottles, buoys from fishing nets (small and big ones), an object resembling wash basin, drums, boots, other wastes. All these objects are floating by the ship.”

From the UH press release: "The map shows the stretch of Pallada's route where debris was sighted between September 21 and 28, 2011. The red rhombus marks the location where the Japanese boat was found and the red circle denotes maximum debris density experienced. Purple color shows the distribution of the tsunami debris in the SCUD model on September 25."

The debris is exactly where Maximenko & Hafner’s SCUD model predicted it would be! This means that we have a reasonably accurate method for predicting where the debris will go, and when it will make landfall. People on the US West Coast states are very concerned – here’s a recent article from Oregon Beach Connection worrying about the debris’ arrival in 2013 – but we are actually fairly well protected by the southbound California Current. It’s the the Hawaiian Islands that are going to bear the brunt of the impact. Hawaii gets nailed twice – first on the eastward journey, then again once the debris gets swept south in California Current (off the US West Coast), into the North Equatorial Current underneath the trade winds, and west to Hawaii. This is terrible for Hawaii’s fragile ecosystem, which already has a huge marine debris problem, but at least we know it’s coming and can prepare.

If you are concerned about marine debris and want to get involved, the most important thing is to get baseline data now, before the tsunami debris arrives. The easiest way to do this is to download the Marine Debris Tracker app (for Android and iPhone) and start recording what you find and where you find it. If you want your data to be scientific, the NOAA Marine Debris program has a Shoreline Survey Field Guide that they’ll send you – just email [email protected].

The accuracy of Maximenko & Hafner’s SCUD model is a product of 50 years of government investment in basic science. All aspects of the model required huge investment in seemingly obscure measurements, such as watching buoys drift around in the ocean and developing satellites that measure wind and sea surface height. (Incidentally, the US satellite that measured wind went offline in 2009 and has not been replaced.)  Can’t you imagine a politician making fun of scientists using “high-tech messages in a bottle”? But the SCUD model is just another reason that it’s never a waste of resources to understand how the world works. Because we’ve made these investments, we have the information we need to reduce some of the consequences of the tsunami’s unpredictable destruction.