On Friday I had cause to meet with a gent called Marco Flagg and it turned into one of the more interesting chats I’ve had in a long time.  Marco is the chief engineer of a company called Desert Star that makes a range of navigation and tracking products, one of which we’ve been using recently to track whale sharks in Mexico.  We spent the best part of the day working on tag data and just chinwagging about this and that, but two of Marco’s stories are real eyebrow (and pulse!) raisers and I relay them here with his permission.

Yep, Marco was attacked by a great white.  There aren’t too many folks who can say that, and Marco will be the first to tell you that he’s one of the lucky ones.  On June 30, 1995, Marco was diving in Moterey CA to test some newly-developed underwater navigation equipment when, in Marco’s own words:

At approx. 17:20 PDT (I did not check the watch), we started the second dive of the day. I was trying out Steve’s diver propulsion vehicle (scooter) and, propelled by the scooter, was proceeding through the water at an approx. 20 degree descent angle. After maybe two minutes and at a depth of about 50 feet (according to depth gauge on the scooter), I looked to my right and saw the massive pectoral fin [I think he means caudal – AD] attached to the end of a torpedo shaped body of a large fish. The fish was at a distance of maybe 20 feet, at the edge of the visibility. The sighting lasted for two to three seconds before the animal disappeared from view in the cloudy water. The approx. 5 foot section I saw did not include the dorsal fin or any part forward of the animal. Somewhat stunned, I quickly thought that the animal matched the shape and size of a white shark (I had never seen a white shark before myself, but had seen plenty of footage recorded by other divers). Also thinking that the animal was most likely just passing and would not attack me, I decided it to be prudent to return to the boat to warn Steve and Marcie. I turned the scooter around and proceeded in the direction of the boat. I used the scooter to propel myself at a slight upward angle, attempting to be careful to not surface too fast and provoke an air embolism. I also did not want to surface far from the boat, recalling that many attacks occur at the surface. I was in an alert, apprehensive state but still calm enough to think “gee, and I got to see it without paying for a shark diving trip” (I naturally have a somewhat strange sense of humor and looking at things). Maybe 15 to 20 seconds after the first sighting (I had already turned the scooter around), I looked to my left and below and saw the massive, wide open, near circular, teeth lined mouth of an animal coming at me. The mouth appeared to have a diameter of certainly more than two feet but most likely not more than three feet. I thought ‘Oh, Shit’ and shortly (one second) there after felt a severe but dull pressure on my body. I do not recall being shaken by the animal nor taking any significant evasive or defensive action. Instead, I appeared to be free from its hold after maybe two seconds (hard to recall). As soon as I realized I was free I thought ‘it did not bite very hard’. I tried to feel if my legs where still there, and they appeared to be. I decided to proceed along the set course at the maximum speed of the scooter, again attempting to surface close to the boat, to not surface too rapidly, and to not trash around thinking that that might cause the animal to bite again.

After struggling with his equipment for a bit, Marco was able to get out of the water and summon his dive buddies by revving the engine of the boat (clever idea).  They took him to shore from where he was whisked to hospital for medical attention.  The lucky part is that when the shark bit down, the top jaw hit the SCUBA tank on Marco’s back, and the bottom jaw hit the experimental nav device, which was strapped to Marco’s abdomen.  As a result, he suffered some tooth injuries to his shoulder, leg and abdomen, but not nearly as bad as it could have been, had the metal bits not been there to resist the bite pressure.  I’m also not aware of other shark attacks that have taken place on divers using motorised scooters (perhaps the shark-o-philes out there know of one?), which is interesting.

1995 was a heck of a year for Marco, because that year not only was he attacked by a great white, but he had also not one but two scares onboard a submerisble while participating in one of the deepest salvage reconnaissance missions ever attempted.  Marco was part of a mission assessing the feasibility of recovering the I-52, a WWII Japanese submarine that was sunk by US forces off the west coast of Africa in June of 1944.  The I-52 has an amazing story in itself, the cliff notes of which are that it was a Japanese cargo submarine (who knew such things existed?) that was carrying a shipment of valuables from Japan to Germany as part of an exchange between the two nations.  The loot included 2.2 tons of gold (current value a cool 100 mill) and over 3 tons of opium, as well as tons of other valuable metals.  In return, the Japanese were supposed to get 800kg of uranium for a proposed dirty bomb, and an Enigma machine.  But the return voyage never took place because a successful US sub hunting group sank the I-52 far west of the Cape Verde islands,  thanks to some clever sonar-guided torpedo work. 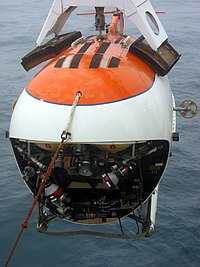 Salvager Paul Tidwell recruited Marco to participate in assessments of the feasibility of recovering the I-52‘s treasure cargo; Marco’s underwater navigation and positioning technology would be a valuable asset for any such attempt.  Tidwell’s team used the Russian Mir submersible to visit the debris field, which was in 17,100ft of water, close the the maximum operating depth of the Mir subs.  If you have trouble imagining that depth, its a bit over thirteen Empire State Buildings end to end, or half the cruise height of a commercial jetliner!  On the first of Marco’s trips down, a mechanical problem developed during the dive which made it very difficult for the sub crew to maintain trim at the bottom or to achieve positive buoyancy at the end of their dive.  Eventually (10 hours later!)  the sub limped to the surface and the problem was repaired.  Not satisfied with that drama, Marco went down on a second dive, during which a leaking valve again made it hard to achieve positive buoyancy.  This time, the sub used almost all available battery power to reach 4000ft depth (after which, for technical reasons, positive buoyancy would be easier); the sub briefly went dark at 4,000ft and the crew had to wait for the batteries to recover a little.  If they didn’t, the team might be forced to jettison the heavy batteries, which would ensure positive buoyancy but would likely also result in an uncontrolled rocket of an ascent, possibly spiralling the sub towards the surface so violently that survival of the aquanauts within would be far from certain.  Luckily, the batteries eventually did recover, allowing the sub to reach 4,000ft, positive buoyancy, and finally the surface.  Can you imagine it?  nearly a mile down, in a 6ft titanium sphere, in total darkness, with apparently dead batteries?  It gives me chills just thinking about it.  Back at the surface, the sub was repaired a second time and Marco (who has much greater faith in engineering than I!) went down a THIRD time.  This time, everything was fine and they were able to gather the requisite data for the mission.  The I-52 still hasnt been salvaged and Tidwell’s work continues; there is a National Geographic documentary about the Tidwell mission called Submarine I-52: Search for WW2 Gold, which was filmed during the trips described above.

However you slice it, Marco Flagg has gathered some crackerjack stories during his career, and most of them in one year.  By his measure, helping me get some migration data from a 40 ft filter-feeding whale shark must seem like a relaxing Sunday jaunt…

One Reply to “Of great whites and great depths”