Staring into one of the aquarium’s exhibits “I like these new Mastigias jellyfish”, I said, absently.
“Sea jelly”, my colleague corrected (with a certain smugness, I might add).
“I beg your pardon?” I replied.
“Sea jelly. They’re sea jellies now.”
“Oh, are they?”
“Yes, like sea stars.”
“I’m sorry?”
“Sea stars.”
“Jellyfish are like sea stars?”
“Sea jellies!”
“Jellyfish are like sea jellies? I thought you said they were the same thing?”
“No, no, no, sea jellies are like sea stars.”
“How do you figure that? One of them is all gooey and tentacular and such, while the other is sort of crunchy and has five arms that don’t much resemble tentacles at all”
*sigh* “NO! jellyfish became sea jellies and starfish became sea stars”
“Ah, I see….I think.”
“Good.”
“And…um…when did …when did this happen?”
“When did what happen?”
“When did invertebrates suddenly begin transmogrifying into other things?”
*quizzically* “Well they didn’t … change … exactly”
“They didn’t? I thought you said jellyfish became sea jellies. I’m pretty sure I remember your saying that. It was a pretty distinctive thing to say.”
“Well I did, but…”
“But what? Did they become sea jellies or not? I mean, I try to stay abreast of major changes in invertebrate systematics, and this sounds like something I should probably have heard about. Last I checked, jellyfish were still Phylum Scyphozoa”
“Sea jellies.”
“I’m sorry?”
“Sea jellies.”
“No, jellyfish are Scyphozoa. I’ve never even heard of sea jellies before just now, I have no idea what phylum they’re in.”
“No, no, they just changed the name, that’s all.”
“What?! Scyphozoa is no more???”
*gritting teeth* “No…jellyfish. They changed the name for jellyfish.”
“What, all of them??”
“YES”
“Wow, how’d I miss that?”
*ignoring me* “They changed the common name ‘jellyfish’ to ‘sea jelly’”
“Who did?”
“Who did what?”
“Who changed jellyfish to sea jelly?”
“Oh, well….um…I don’t know exactly. I…um…I just heard that somewhere.”
“You heard it?”
“Yes.”
“You heard it.”
“Mmhmm.”
“I see.”
“Yep.”
“And were these the same people who changed starfish to sea stars?”
“Er… I guess so, I don’t really know.”
“Seems important don’t you think?”
“What does?”
“Changing the commonly-accepted name for large groups of invertebrates. Seems like something someone in some sort of position of authority ought to be doing.”
“I guess.”
“And are they?”
“Are they what?”
“Are they in a position of authority?”
“Well, I don’t rightly know. I just…I read somewhere…”
“Why?”
“Why was I reading? What an odd question!”
“No, why did they change the name?”
“You mean jellyfish?”
“Yes”
“I think it was to reduce confusion”
*pause*
“ORLY?”
“I beg your pardon?”
“Nevermind. So you’re saying they changed jellyfish to sea jelly to reduce confusion?”
“Yes.”
“Confusion with what?”
“Fish.”
“Huh?”
“Fish.”
“People were confusing fish and jellyfish?”
“Yes. I mean … I guess. I don’t really know.”
“You don’t know the difference between a fish and jellyfish?”
*scowling* “Of course I know the difference!”
“Well, why change the name then? Was there a sudden epidemic crisis of taxonomic confidence among today’s youth?”
“A what?”
“Forget it. Look, we can’t have mysterious groups of anonymous people just going around changing the names of large groups of cnidarians just because T-Ball Nation can’t tell the difference between bilateral and radial symmetry”
“T-what?”
“T-Ball Nation. You know, Generation Text.”
“You’re a strange person, you know that?”
“Yeah, well at least I can tell the difference between a fish and a jellyfish”
“I KNOW THE BLOODY DIFFERENCE BETWEEN A FISH AND A JELLYFISH!!!”
“Good for you, but you really should try to calm down a bit, maybe…”
“I’m perfectly calm.”
“…consider decaf or, y’know, meditation.”
“I. Am. Perfectly. Calm.”
“Well OK there sport. Anyway, let’s go on to the next tank. I heard they’ve got some lovely sea cuttles…” 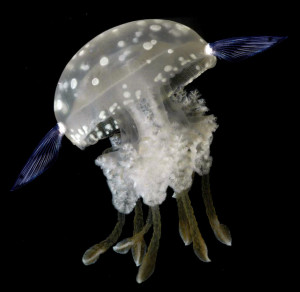 33 Replies to “On common names”