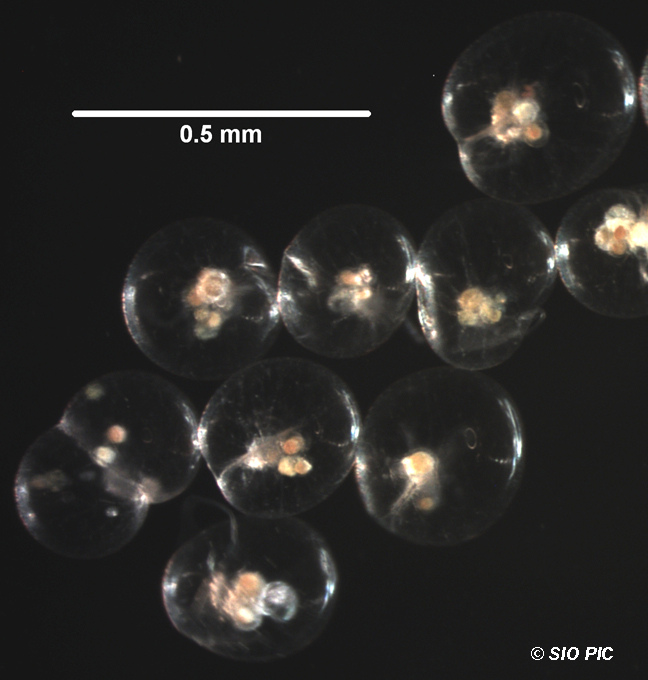 The red tide that has lit San Diego for several weeks is ending in a microscopic bloodbath. The above photo was taken by Linsey Sala, the manager of the Pelagic Invertebrates Collection at Scripps Institution of Oceanography. She writes:

This image was taken from a collection at the SIO pier this [Friday] morning with a 0.120mm net.  It illustrates a heterotrophic dinoflagellate (Noctiluca, nearly transparent disks) feasting on the autotrophic red tide dinoflagellate (Lingulodinium polyedrum, orange-red cells).

Noctiluca is a dinoflagellate like Lingulodinium, but it can’t photosynthesize. Instead, it makes a living vacuuming up other single-celled organisms. Some Noctiluca are bioluminescent, but the species here in California is not. According to Dr. Peter Franks:

Back in 1995 we had a dense red tide of Lingulodinium polyedrum here, and it collapsed rather suddenly largely through grazing by Noctiluca. Once the Noctiluca had eaten all the L. polyedrum they starved and floated to the surface. There they were swept into lava-colored bands by the underlying internal waves for a few days.

Perhaps we’ll have that to look forward to in the next week or so.