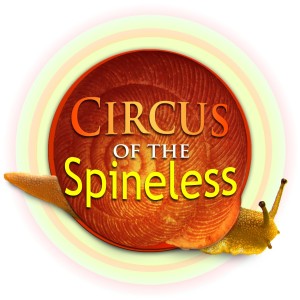 Welcome the 67th edition of the Circus of the Spineless! It is my distinct honor and privilege to highlight the stars of this here traveling roadshow for the month of October in the year 2011. I hope you can all sit back and enjoy the amusement!

Watch in the deep, dark chamber of doom as the squid changes colors right before your very eyes! Ed Yong tells the tale at Not Exactly Rocket Science and a most promising new blog on the block written by Katherine Harmon, called (fittingly) The Octopus Chronicles, has the scoop!

WoOoOoOoOOooO keep an eye out for the GhOsT CRaBbbBbBbBB, perhaps the only thing you might see from this apparition is its ghostly tracks on a Georgian beach.

Think you are a master crafter? The tatting caterpillar may have you outgunned. Watch as it mesmerizes you with its artistic prowess, making doilies out of flowers.

As if the artistry of the tatting caterpillar was not enough, be amazed as this tiny designer transforms a nondescript plant stem into an architectural wonderland. Think you have the ‘gall’ to pull it off yourself?

Watch as critters upon critters upon limpets descend unto the abyss, or at least blades of seagrass. A world, a microcosm all because of a little movins island! But not all fuzz is as it seems…

Flowers everywhere are shuddering at the thought, but where, oh where, have all the bumblebees gone? Bug Girl wants to know, and she also wants to know who those wily bug bloggers are! Please take a very brief moment to take her State of the Bug Blogosphere survey.

This next link is only for the eyes of water bugs that past their third molt! Parents use discretion as the dragonfly lady goes into TMI detail about the long, involved process of giant water bug mating. Pornographic video and images follow, so go at your own risk!

Finally, have you heard about the #SciFund Challenge?? It is a crowdsourced funding initiative for science research. That means, it relies on YOU to go in and fid the really cool science projects that you would like to see happen! There are 49 projects, all of them quite impressive. Here are the Spineless offering, go fund them!

The Circus will be traveling next month to Dave Hubble’s Ecology Spot. Send next month’s submissions to dshubble at yahoo dot com by December 4th! Thanks for tuning in and supporting one of the longest running science blog carnivals.

One Reply to “Circus of the Spineless #67”