Glamour magazine, where the HELL are female scientists in your annual “women of the year” awards?

Year after year, you honor female actresses, fashion designers, politicians, activists, athletes and models. You bestow awards on some truly amazing people, who have made it their life’s work to change the world and spread messages of peace, hope, and joy. When have you ever even mentioned science?

Day in, day out (and often all through the night) a veritable army of female scientists are working their assess off in labs across the world. We don’t do it for the money—we work because we believe in something greater than ourselves, believe that one day our small steps in knowledge will revolutionize our understanding of the natural world or translate into huge medical advances.

Glamour is the magazine our children and neighbours read. They certainly aren’t sitting down with the latest copy of Science.  Hell, they probably aren’t even reading our colloquial science-y musings at Deep Sea News, but we’re working hard to change that.

Glamour, I’m begging you: if you don’t honor women scientists as Women of the Year, how will people even KNOW that science even EXISTS as a career option?

Is it because society sees scientists as this? 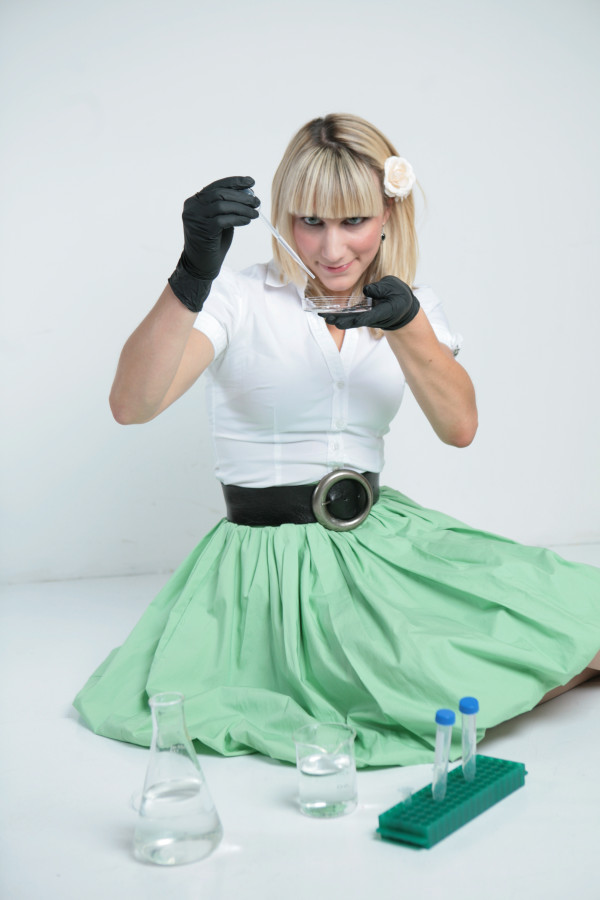 My sister’s high school friends don’t have aspirations to become a stuffy, boring intellectual (trust me, I’ve had this conversation with them).  We can only empower younger generations if we show them ALL of the paths that exist for them. And right now, science isn’t even on the map.

I have made it my life’s mission to change the public perception of science.

And at Deep Sea News, we’ve made it our mission to expand the culture of ocean science.

The oceans are deeply ingrained in human culture. Scientists are fundamentally human. Here at Deep Sea News, we have strengthened our resolve – we are determined to highlight areas where the ocean touches our society, and to provide a window into our lives as both scientists and members of this broader society. We will strive towards a future that allows for scientists and the public to be partnering stakeholders in sustaining and preserving our oceans.

Us researchers know that science is dynamic and interactive – full of passion and drive. Our colleagues have PERSONALITIES – we work with unique, intelligent people that are always a far cry from the dry, boring (old white guy) stereotype. I’m a marine biologist who reads Vogue and teaches yoga in my spare time.

But changing the culture of science doesn’t just mean reaching out to the public. It means convincing scientists to build and maintain a high public visibility—leveraging blogs and social media is lucrative and worthwhile.  Engaging non-scientists isn’t an option. In today’s world, it is a necessity. And, contrary to popular belief, this type of outreach doesn’t compete with your research—on the contrary, it enhances and broadens your traditional scientific portfolio.

Right now, I swear the science world is just like the fashion world.  In the words of Heidi Klum, “One day you’re in…the next day you’re out”. And in the cutthroat fight for tenure, you never want to be asked to leave the runway.

Getting published in the highest impact journals is like getting a front row seat during fashion week.  You put your head down, lock the doors, and work your ass off in hopes of one day securing that golden ticket. If you’re lucky, some mysterious group (Nature editors!) decides that your research is So Hot Right Now, and BOOM, ticket in the mail (manuscript accepted!).  Sometimes you look at who is there and you’re confused and annoyed – really? Snooki got an invite to Missoni?  (Nature’s table of contents is full of Mouse T-cell interleukin binding factor WHAT?).

With the intense job competition and tight race for funding, I feel like us early career researchers have two options:  We can quietly work hard, chasing high-impact papers or becoming really good at something like taxonomy, but realize that we will be forever cramped in a closet office and lack recognition for the first 30 years or so, OR we can become the Lady Gagas of science.  Sure, your eccentricity and unconventional ways may turn heads and boil some blood.  But behind the gossip and chatter, you make really f*#*%ing awesome music (innovative, thought-provoking science). Lady Gaga not only gets a front row seat at fashion week, but she gets people talking and gets people excited.  By reinventing the notion of a pop star, she has defined new paradigms for the entire music industry.

At Deep Sea News, we’re defining new rules for the next generation of scientists. The public will tear down the Ivory Towers with their own bare hands.

Yes, I am sitting here, alone in a room, venting out my frustrations though a computer—ranting online and hoping someone will notice. But you’re dead wrong if you think this will be the end of it.

UPDATE: Thanks to everyone for all the fabulous discussion and thought-provoking comments. I just wanted to follow up with a clarification and a few further points

I’m not saying we should just go and glam up science. Running a glossy PR campaign might get people to take notice temporarily (and spur heated arguments), but it isn’t addressing the deeper root of the problem. Personally, I’m not one to get involved in these type of debates – everyone has their own opinion, often there is no right answer, and fruitless anger is a waste of my time and energy.

In my view, making scientists visible is about redefining what we value and how we function as a society. With a stagnant recession and climate change on the horizon, we cannot AFFORD to keep putting on blinders and recklessly forging ahead. You want to create jobs? You want to build a sustainable future? Invest in science and technology.

Grad students and postdocs are some of the most engaging and enthusiastic people I’ve met, but in terms of salary, benefits, and workload they are oftentimes treated like slaves. I have friends in Manhattan who work as secretaries and get paid almost double my salary–is that right? Given the way we currently treat scientists, what does that say about what our society values? A system that beats down its most promising trainees, either forcing them out (due to financial constraints, etc.) or forcing them to produce only what the system wants (high-impact papers), is fundamentally flawed. The system also places a perpetual barrier between researchers and all other non-scientists. A public that mistrusts researchers is not well informed about how science works.

I’m lucky that my PI is supportive of me blogging on the side, but I know that many researchers would not tolerate it and/or would constantly worry that it is interfering with their scientific productivity. But that brings us back to the issue of how we measure “productivity” in today’s technology-driven world.

Yes, there are a lot of people swimming in the Ph.D. pool, and far fewer academic jobs. Academia will always be competitive, and if you’re set on that career path you need to be fully aware of what the game entails. Going through grad school won’t be easy, being a postdoc isn’t a walk in the park. But not everyone who likes science has to go into academia! Not everyone needs or wants a Ph.D. The scientific thought process can be so inherently beneficial for EVERYONE, on both a personal and professional level: Knowing how to assess and find trustworthy sources of information, examining all the available facts, thinking about them critically, and then placing them in the context of your personal experiences and opinions.

What I’m advocating is that we just need a greater awareness of scientists in general. We exist! We aren’t boring! You can talk to us about normal stuff!  We’re as passionate and driven as any actress or rock star. For us insiders (academics, grad students, etc.), we all know that “stuffy scientist” image is definitely not true. But ask a random 7 year old what a scientist looks like, and guess what picture they’ll draw? The crazy old guy. The ubiquity of that stereotype is deeply disturbing:

Students’ views of science and scientists have been widely studied. Classroom learning environment has been found to play a major role in these perceptions. High school students often have a stereotypically masculine image of science and view scientists and scientific work as unpleasant entities. To examine where students develop their images, children have been asked to draw pictures of scientists. Most drawings portray a scientist as an elderly male wearing a white coat and glasses. However, teacher intervention programs have been shown to be effective in helping to alter these negative images (Mason, et al. 1991). [from the National Science Foundation website]

And then there’s this – a study where kids were asked to draw pictures of scientists before and after their classroom was visited by actual researchers. The “after” pictures look like the scientists I know. But look at those “before” pictures!! As much as we scientists don’t want to admit it, we spend our entire lives locked in an Ivory Tower. The barrier between scientists and non-scientists is stark and tangible.  Treebeard needs to get his ass down to Isengard and rip down that thing down, stat!

So no, we shouldn’t all scramble to be high-visibility Gagas – I’ll happily volunteer to fill that role. If we can’t convince the system to change, we need to change our own approach. Deep Sea News isn’t a traditional approach in science, but we Deeplings have all experienced a multitude of scientific benefits from using this blog as a platform. We will make the collective of voices grow. We will redefine the status quo.

24 Replies to “Changing the Culture of Ocean Science: a DSN core value”