Try to imagine a virtual ocean, an online watery world divided into discrete ecosystems, each populated with semi-autonomous avatars of every marine species that lives there.  Each mammal, fish, shark, sponge and coral, created by a digital artist, set loose with a set of naturalistic behaviours programmed in.  That is the audacious goal of a new online endeavour called TheBlu.  I had a chance earlier this week to take a look at TheBlu with co-founder Neville Spiteri.

TheBlu began as an art and entertainment project for the folks at the MIT media lab and WemoMedia, a gaming and online entertainment company where Spiteri is a primary.  Over time the idea of a sort of 3D digital canvas where digital artists could practice creating realistic undersea critters soon turned into something much bigger.  When showing it around, Spiteri noted how the idea resonated with Education folks as a potentially great instructional tool.  Others saw it going in other directions, mostly around gaming and social media.  Over time, the creators hedged on these and settled on a goal of making a virtual ocean world using open source code so users could assemble content  by designing and adding new species, each based on a real one, and letting users make of it what they will.  The result is a web-based experience that’s part casual aesthetic experience, part teaching tool, part game and part social media app.  Users are invited to explore the different habitats, “collecting” new species (in the manner of birders with their life lists) and using each animal as a portal to interact with other users or to click out to external data sources about that animal or it’s ecosystem. 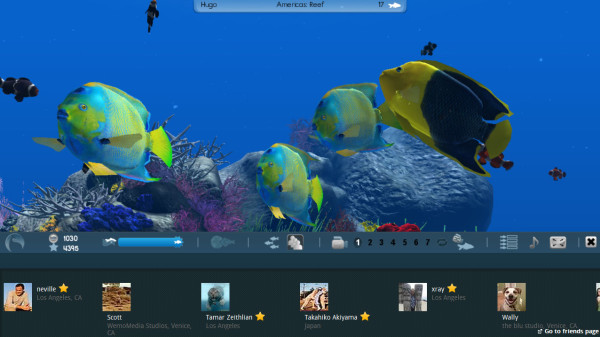 So what’s it like?  Well, the visual feel of TheBlu is great.  Surface waters ripple serenely and sunlight beams dance on sand waves on the bottom to create a very pleasing and pretty realistic effect.  The gaming design and movie CGI heritage of TheBlu shows here; the graphic feel of the environment is about the level of many current-day console games or a bit like being in Finding Nemo.  One important difference from many games is that it is not a first person free-form experience.  In other words, you don’t move through the world, but rather you toggle between different camera viewpoints that tilt and pan to look around.  Once you click on an animal, though, the camera view switches to a quasi first person view from the animal’s perspective.  This way of looking at the world takes a little getting used to, but quickly begins to make sense as you play with it. 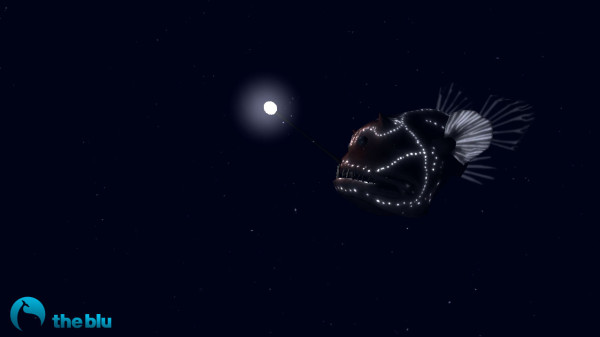 Several “spheres” are available, which biologists would call ecosystems, like coral reefs and deep seas (above, the newest)  and even sandy zones where the water isn’t as clear, which is a nice touch of realism.  The bottom fauna is pretty sparse, a result of the current focus on creating fish, sharks and marine mammals (about 100 species have so far been created).  Over time, the bottom should fill up with sponges, corals and macroalgae, where these are appropriate.

The individual fish are nicely done.  Normally I hate fish art because it usually looks tacky, but these are sufficiently realistic to pass general muster.  Some haven’t been perfected yet; the sailfish is handsome but has funky pelvic fins and doesn’t move naturally, and Spiteri and I share a laugh over a razor fish that swims horizontally (this species’ sole claim to fame is swimming vertically).  The greatest sense of artificiality probably derives not from the fish themselves but from their behaviours.  Site-attached reef fishes swim up in the water column while ambush predators like barracuda sometimes wriggle around in most uncharacteristic fashion.  Over time, as the collaboration between digital artists and biologists increases, many of these issues ought to be sorted out and more naturalistic behaviours will take over.  One example is the recent addition of schooling fish in the form of shoals of sardines and to go with it, the  programming of predatory behaviour in some fishes like the barracuda shown below.

After a while playing with it, I conclude that TheBlu is a strange sort of creature, but one with a future if it catches on.  It’s sort of an oceanic Second Life, with a healthy dose of FourSquare and a splash of Farmville.   It looks terrific and the music is great.  I applaud the makers for choosing an open source approach, although I guess  they had to if they ever wanted to reach the goal of having all marine species represented; even the biggest software companies around would take generations to do that, whereas an army of users could at least make a good start, Wikipedia-style, in a reasonable timeframe.  The greatest question then, is WILL THEY?  It’s sort of an “if you build it, they will come” thing, and I’m wondering whether the user base will reach the critical mass that is a prerequisite for any user-assembled endeavour to thrive.  In this, I think they’ll be helped by crystallising their goals at least a little more (game? teaching tool? social media app?).  At the end of the day I hope it DOES take off, especially in the classroom, where it has great potential for capturing the imagination of Generation X-Box and maybe introducing them to marine biology in a way that they can relate to.

TheBlu is currently in Beta testing with several thousand users.  If you want to check it out yourself, I have ten free beta access codes to give away.  Five to the first comers in the comments section, and five to the first folks to DM me on Twitter

16 Replies to “Into TheBlu, virtually”