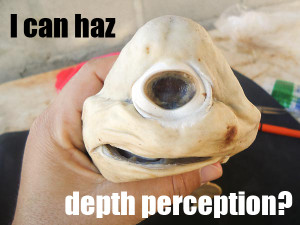 If you’ve been out of touch for a while lately and haven’t immediately grokked what this post is about from the title, it concerns a surprising recent find by a Mexican fisherman of a very special little shark.  Enrique Lucero León was fishing in the Gulf of California and caught himself a pregnant dusky shark.  Upon cutting her open, Enrique found several normal dusky shark embryos and one that stood apart from the others.  “Cyclops shark”, as he became known, was smaller than its siblings, pure white and with a single large eye right in the middle of the head, facing forwards.  Needless to say, this unusual find was worthy of comment, and it was picked up on a sportfishing blog (which, unfortunately, seems mostly devoted to catch-and-kill trophy fishing).  I think it’s safe to say that Cyclops shark’s discovery then went viral, because you can now read about the little guy all over the place (like here, here, here, here, here, here and here).

Some of the links above address where Cyclops shark’s condition may originate.  Briefly, it’s probably a sort of holoprosencephaly (ungh!), which is a class of birth defects in which the front part of the brain doesn’t separate into two hemispheres properly and, consequently,  neither does the face.  This can present itself in all sorts of ways, some more unfortunate than others, and “cyclopia” is one of them.  Abnormal embryos occur at very rare rates, but given the number of births that take place in nature, they’re actually happening all the time but are rarely seen because they frequently do not survive very long.  There’s more to this viral story than genetic mutations and abnormal fetal development, however, so what is it about Cyclops shark that is so engrossing, and how is it that he comes to be so famous so quickly? 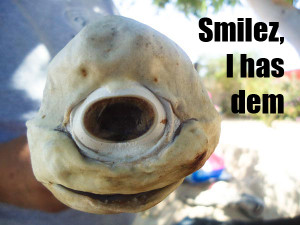 It seems safe to conclude that the meteoric rise of Cyclops shark is probably the result of a confluence of factors that touch on the uniqueness of his case (1,2,3,5), some cultural factors (1,2,5) and the perceptions of the viewer (1, 3, 4).  It’s sad that Cyclops shark never had a chance to try and make it in the wide world, but based on other cyclopia cases, the chances he would have survived more than a few hours or days is actually very low.  Indeed, it may only be because of the exquisite (and unfortunate, for the siblings anyway) timing of one Mexican fisherman, that we even know of Cyclops shark at all; nature is very good at weeding out such functional imperfections.  I seriously doubt there will be another Cyclops shark reported anytime soon, so here’s to you, little guy!

3 Replies to “Why cyclops shark grabs at our imagination”