When I say I am going on research cruise, I get two responses. 1. “Well that sounds nice, do they serve cocktails and is there shuffleboard?”  2. “How much a day does a ship cost?”

In response to one, I do enjoy working at sea. If I didn’t I would be on fast track to another career making butt loads of money (note one boat load equals 2.3 metric tons U.S. dollars by weight).  But and a big butt at that (almost a butt load) is the work that is physically demanding, mentally taxing, and can span hours without sleep.  However, after that I go to the onboard pub and enjoy a large gin and tonic as reward!  Scratch that. The U.S. oceanographic research vessels are all dry.  Indeed, the organization that oversees the U.S. research fleet states

It is the policy of UNOLS, as approved by the UNOLS Council, that all UNOLS vessel operators shall ban the consumption of alcoholic beverages on board UNOLS vessels by crewmembers or embarked members of the scientific party, except as provided below.

Certain exceptions can be approved in writing by institutional management for the purpose of allowing the possession and consumption of alcohol on board UNOLS vessels while in port for receptions, special occasions and entertainment of visiting dignitaries. Participation by ship’s crew in these events shall take into consideration scheduled time of sailing and the need for full sobriety at the time of departure.

Possession of alcohol on board UNOLS vessels by crewmembers or embarked members of the scientific party is prohibited, with the exception of transport in bond under the control of the Master as allowed by institutional policies and at the discretion of the Master.

And there is rarely shuffleboard!

These regulations do not apply to non-U.S. research vessels. I once spent time on German science icebreaker that actually had two pubs, an informal one for Tuesday, Thursday, and Saturday nights and a formal one for Fridays and Sundays or at the captains discretion. I also once played cricket on board a non-U.S. vessel. My understanding is that U.S. research vessels once allowed alcohol onboard but banned after a intoxicated scientist was lost at sea at night.

In response to two, I really do not know how much a day of ship time costs.  Why I don’t know is the fodder of this post and requires a bit of explanation.  U.S. research vessels are overseen by an organization, the University-National Oceanographic Laboratory System (UNOLS) currently at the University of Rhode Island.

The University-National Oceanographic Laboratory System (UNOLS) is an organization of academic oceanographic institutions working in cooperation with agencies of the U.S. Federal Government to ensure broad access to modern, well operated, state of the art research vessels, submersibles and facilities required to support a healthy and vigorous research and education program in the ocean sciences.

For a little history…

In 1970, 17 different institutions operated 33 research vessels.  Concerned emerged that (1) scientists not from these institutions needed access to ship time through an efficient process, (2) federal support of these vessels occurred by different models and funding, and (3) that leveled off funding would not support both higher ship costs and ship numbers.

R/V Atlantis is the only vessel in the U.S. research fleet designed to support the Alvin submersible. (Photo by Amy Nevala, Woods Hole Oceanographic Institution)

About this time a president’s commission, the Stratton Commission, recommended joining the oversight of U.S. research fleets under a single agency. The same report by the Stratton Commission also created NOAA and Sea Grant. However, the lack of explicit definitions and process delayed the formation of the agency. Because of this and politics, the NSF science foundation and the university administrators were forced to proceed without larger scale government assistance.  UNOLS was officially launched in 1971 with 17 institutions. Later, non-ship operation institutions were able to become members of UNOLS. The consortium is now composed of 61 member institutions with 16 institutions operating 21 ships. As per the charter, UNOLS headquarters regularly moves to different partner universities. 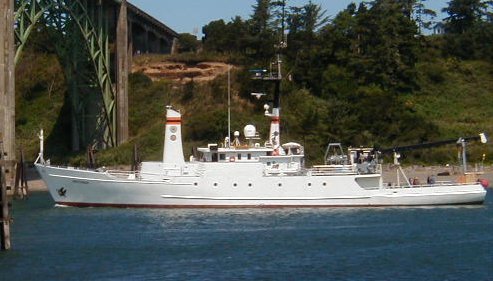 R/V WECOMA is owned by the National Science Foundation and operated under a Cooperative Agreement by Oregon State University, College of Oceanic & Atmospheric Sciences. The vessel is homeported in Newport, Oregon.

The initial thrust was development of ship scheduling and investigator placement procedures. This was followed by uniform cost accounting, cruise reporting, ship operations data, and information services. Key elements of UNOLS were that ship operations remained the responsibility of the individual lab operator, and that UNOLS was not a ship funding activity

The Pelican is a highly-modified Cessna 337, O2, Skymaster operated The Center for Interdisciplinary Remotely-Piloted Aircraft Studies (CIRPAS) is a research center at the Naval Postgraduate School in Monterey, California.

So how much does a day of ship time cost?  The reason I cannot answer this question is because I request actual ship time from UNOLS not a budget to support the ship time.  When I submit a grant to government agency to conduct oceanographic work, I simultaneously submit a request to UNOLS detailing the required amount days, vessel (including aircraft, remote operative vehicles, or submersibles like the Alvin), and equipment I need. I never need to discuss acutal money just my need. Part of this is selecting the right class of ship, global, oceanic, regional, or local capabilities, i.e. the right size to support the equipment, fuel, crew, and provisions we will need for the research cruise.  I need to plan on ship time 1-1.5 years in advance.  Sometimes clearance takes 6-7 months alone.  UNOLS arranges this ship time based on availability and location of ship and coordinates this with the funding agency.   Thus UNOLS is competitive funded by NSF, ONR, NOAA, BOEMRE, USCG, and USGS.

All this being said, some vessels are not under the UNOLS system.  When I use one of these ships, I need to budget for their usage and so I am acutely aware of their costs.  A regional ship with a remote operative vehicle (ROV) and necessary ship and ROV crew can cost $25,000-$35,000 a day.  A recent proposal of mine to support just 5 days of ship time totals $175,000.  A much larger global-class ship with a submersible, say the Atlantis and the Alvin, could range up to $50,000.

So a big thank you to the U.S. taxpayer for funding UNOLS and the ship time that allows us to continue to unlock the secrets of the ocean and atmosphere.