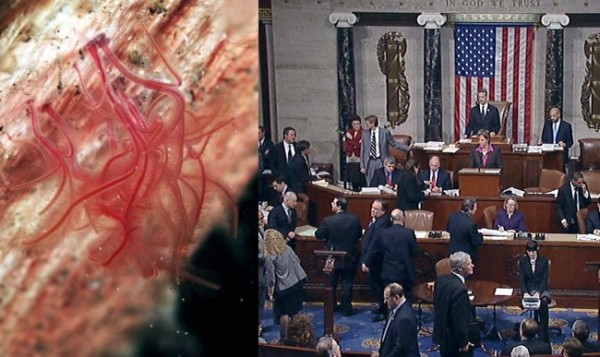 Some of these things are not like the other. Can you spot the Zombie worms?

What’s the difference between a collection of Osedax “Zombie worms” and the 112th United States Congress?  One is a population of spineless, sedentary, opportunistic life forms that thrive in darkness while devouring the bones of the dead.  The other are a species of deep sea polychaete worms.

Exhibit A:
In news that barely made it into print on November 20th, the US House of Representatives killed a request by the National Oceanic and Atmospheric Administration (NOAA) to reorganize and consolidate it’s miscellaneous climate-related offices into a single, unified National Climate Service.  The request sought to, “bring together NOAA’s existing dispersed climate capabilities under a single line office to more effectively and efficiently respond to America’s increasing demand for climate information.”

By midsummer 2011, opposition was mounting against Congressional approval of any aspect of the National Climate Service.  Rep. Ralph M. Hall (R-Tex.),  chair of the House Committee on Science, Space and Technology, rallied the Republican-led House in rejecting the NOAA recommendations in their entirety.  Republicans and other critics asserted that the establishment of a National Climate Service would only provide a centralized federal  mouthpiece for “pushing the global warming agenda.”  and build the pulpit higher for politicians and climate scientists to hawk their climate timetables. “Our hesitation,” Rep. Andy Harris (R-Md.) contended, “is that the climate services could become little propaganda sources instead of a science service.”

Not to miss a chance for a Congressional retort, Rep. John Sarbanes (D-Md.), a key proponent of the service, said, “Will not!”

To which Harris shouted, “Will!”

shaking his hand in a clenched fist, Sarbanes screamed, “Will not!”

[RickMac: Sorry readers, the opium-like allure of the climate debates had me there for a second.  We now return to normal programming]

What Rep Sarbanes actually said was, “There is a strong scientific consensus that climate change is happening and human activity plays a significant role. Yet the Republican leadership in Congress continues their reckless political stunt of climate change denial.”

And boom goes the dynamite.

The nixed National Climate Service had an impressive roster of supporters from the expected (legislators, NGOs, the National Academy, the American Geophysical Union) to the unexpected (farmers, fishermen, and insurance companies).  Given that NOAA estimates that up to one-third of the US GDP depends on accurate weather and climate information, it’s not a leap for individuals as well as corporations to do the economic math and realize how national securities are tied to a predictable climate.

Let’s be honest… reorganizing any branch within a federal agency is no trivial proposition.  And NOAA, a sprawling agency within the US Department of Commerce that oversees fisheries management, weather prediction, ocean research, geodetic surveys, and environmental data monitoring, has something of a reputation as being a collection of information silos–work groups that are incapable of exchanging information with other systems within its own organization.  I mean look how bad it is at the Smithsonian Museum of Antiquities requisitions office.  They’ve been waiting for a crate marked Ark of the Covenant to arrive from storage since 1936.

And yet that silo effect was precisely the rationale for the proposed National Climate Service.

In February 2010, NOAA announced its intention to create a parallel entity to its National Weather Service that could issue long range climate forecasts about future weather conditions such as severe storms, floods, and droughts.  Championed by then recently appointed administrator of  NOAA, marine ecologist Dr Jane Lubchenco, the proposed climate service was intended to strengthen science across the agency by integrating three data centers, two laboratories, and the Climate Prediction Center.  The service was intended to respond directly to a 2009 report by the National Research Council calling for, “A mechanism to identify, produce, and deliver authoritative and timely information about climate variations and trends and their impacts on built, social- human, and natural systems on regional, national, and global scales to support decision making.”

That sort of “authoritative and timely information” requires analysis of scads of data.  And with better technology and remote sensing, we get an escalation in available data. From 2009 to 2010, NOAA saw an 86% increase in climate-related data.  NOAA even attempted to put this data spike into context for Congress, “An average Kindle book download averages about 800,000 bytes.  In 2010, NOAA served up a total of at least 1.9 billion Kindle books worth of climate data, roughly 867 million more Kindle-book equivalents than 2009.”

The National Climate Service represented  a bold new model for handling this growth in data by provided a “one-stop shop” for climate data, information, and decision-support services allowing for more efficient coordination by NOAA with other agencies and partners.

And the kicker?  The reorganization was actually budget neutral: no change to existing staffing levels, no employee relocations, no new facilities, no physical relocation of any programs or labs.  And despite a misleading House Appropriations Committee news release last week which implied that Congress had saved $322 million in fiscal year 2012 by nixing the climate service, those funds were already earmarked for climate research and data delivery. But instead of being consolidated under a centralized climate service, they’ll be distributed across the agencies silos as has been the status quo.

It’s really discouraging.  At a time when we should be laser focused on our planets climate, we can’t seem to rise above the political climate.

6 Replies to “When Far-Sighted Vision Meets Near-Sighted Politics or Zombie Worms For Congress!”