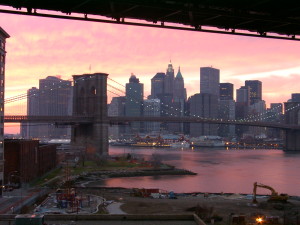 There’s nothing quite like the excitement of moving to a new city and getting your first apartment, and for me as for so many others, that feeling is amplified when the city in question is New York.  So it was when I moved from Brisbane to Brooklyn in 2000.  That first apartment was a questionably-legal loft space in a commercial building on the waterfront of the East River, directly adjacent to one of the monolithic pylons of the Manhattan Bridge in a neighbourhood now known as DUMBO.  Man, I loved that loft!  It was a 6 flight walk-up, the nearest laundry was in Brooklyn Heights, the door buzzer was broken and tar dripped on my bed from between the roof beams in summer (I was on the top floor), but it had 13 foot ceilings, wooden floors polished by 150 years of factory worker’s shoes, and a multimillion dollar unobstructed view of the East River, the Brooklyn Bridge and all of downtown Manhattan beyond.  I loved nothing more than hanging out that window with a Brooklyn Lager listening to the N train rattle overhead and counting how many different modes of transport I could see at once.

Catching the F-train to Coney Island each day for work, I routinely passed the highest point in the NY Subway system, a graceful elevated arc of bridge at Smith and 9th Streets that weaves between long-defunct illuminated signs on Civil War era warehouses.  And every day I would look down from that bridge into one of the darkest, most shameful corners of the NY metropolitan area and a stark example of all that is wrong with 400 years of poorly constrained urban development in NY: The Gowanus Canal. 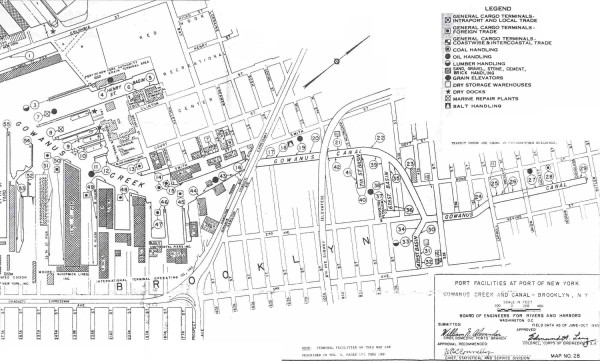 Gowanus Canal: the name alone is enough to nauseate most visitors to that little corner of western Brooklyn.  It’s greasy rotting wooden bulkheads, rafts of oily plastic pollution, scummy skin of god-knows-what and rank smell (oy vey, the smell!) assault the senses like few other bodies of water I have ever known (although some back bay areas of Rio and urban streams in Delhi give it a good run!).  I don’t know what’s scarier, that such a cesspool is allowed to exist in the greatest city in the world, or that most residents of Gowanus, Red Hook and Carroll Gardens  wander about their daily lives of Metrocards, bodega knock-off sunglasses and limp pizza slices – folded of course – oblivious (or worse, acclimatised) to the unmitigated environmental disaster that snakes from Greenwood cemetery to the harbour.  Of course I’m not the only one who would gag at the mere thought of that fetid ditch, and it seems like there might finally be some action to make a major restoration of the Gowanus Canal area: it was listed as a Superfund site by the US-EPA in 2010 and the agency is now considering options about how to clean it up.

Gowanus Creek of the 1780's (Library of Congress)

Gowanus Creek was an original feature of the natural shoreline of the western tip of Long Island that is now Brooklyn and was named after a chief of the resident Canarsee native tribe.  As the industrial revolution exploded in NY, that part of Brooklyn began to develop rapidly and the water quality in the creek began it’s inexorable decline.  In the mid-19th century the creek was engineered into a 1.5 mile canal and began to be used to transport materials to and from the slew of ink, paint, gas, coal, chemical and other factories proliferating in the surrounds.  The low-lying salt marsh was reclaimed, the channel dredged and the shoreline hardened with concrete, boulders and wooden beam bulkheads, with the work completed in 1854.  Here’s where the first major error took place.  The original canal design was supposed to maintain good tidal flushing of the creek using a system of locks, but these were value engineered out of the plan, all but ensuring that the upper reaches would eventually become both polluted and starved of the life-giving oxygenated water otherwise delivered twice daily by the (unfortunately gentle) NY tides.  This situation was exacerbated as the surrounding wetlands continued to be drained for residential development; the first sewerage pipes from these areas were directed into the creek in 1858.  An agreement to redirect these to the East river in the 1860’s was never executed, so the canal continued it’s pollution from both the 50-odd factories in the area and an expanding series of raw sewage discharges.  An attempt was made to improve the flushing of the canal at the turn of the century by connecting a major stormwater drain (like, 17ft diameter!) from Greene Street to the canal, but rather than flush the canal with oxygenated seawater, it simply provided a periodic input of freshwater washed from the hardened streets of turn-of-the-century Brooklyn, with all the unimaginable filth that inevitably went with that.  This situation couldn’t last, so a new pipe was built to the harbour and fitted with a pumping station to force seawater from NY Bay into the upper reaches of the canal with a 7 foot propeller.  This arrangement didn’t cure the canal’s ills, but it did get it through the busiest part of its history when up to 25,000 vessels a day transited the Gowanus (nowadays its “just” a thousand or so).  At that time it was the nation’s busiest commercial waterway, moving 6 million tons of cargo each year in the years around WW1.  The pumping station flushing system operated until (so the story goes), a maintenance worker accidentally dropped a manhole cover on a critical part of the motor in 1960, permanently disabling it; the pumping station never operated again.  These days the canal is used less, but is no less contaminated; the sediments have high levels of persistent pollutants like PCBs and PAHs and the marine pathogen counts are off the chart from continued sewage inputs and stormwater runoff.

There IS life in the canal yet.  No longer will you find the creek’s famed fat oysters that Mark Kurlansky wrote about and there’s certainly nothing in there you would want to eat, but the occasional bass & spider crab pass through, and apparently there are some very interesting and adaptable microbes found in the tar-like sediment sludge.  Supposedly a Minke whale swam into the canal in 2007, beached itself and died, but its hard to say whether it got sick because it went into the canal, or went into the canal because it was sick.  Either way, with dissolved oxygen levels consistently below 1ppm (the definition of “anoxic”), persistent chemical pollution and 20 active combined sewer overflows, the canal is still as nasty as ever.

Current NYC Mayor Michael Bloomberg has resisted the Superfund listing of the Gowanus because it means ceding some authority over city property to the feds and adding a 5th (count ’em!) superfund site to the western part of Brooklyn, which affects public perception and – no doubt – real estate values.  But, radical problems require radical solutions and the Superfund listing and associated restoration process (& funding) offers the canal probably it’s best chance to see some meaningful improvement.  Degraded urban sites can be renewed.  Great work has been done at nearby Brooklyn Bridge Park, for example, which was built in DUMBO around the time I was there and involved removing hardened shorelines, creating a pebble beach on the East River and building grassy areas and playgrounds now popular with the families that have moved into the area as “gentrification” has progressed.  A remediation plan is expected to be chosen shortly with restoration efforts in the Canal to commence later this year and continue until the Canal meets federal standards.  One day in the not-too-distant future, then, I’d love to go back to NY, take a ride on the F-train to Smith and 9th and look down into a new sort of canal.  I don’t expect to see a Thoreau-ian idyll of waving cord grass and bluefish chasing silversides in the shallows, but it sure would be nice to NOT see the rainbow of oil on water, half a rusty shopping cart and an Oldsmobile slowly sinking into the sludge.

Sources/Further reading – Kevin Olsen’s excellent list of Gowanus Canal resources including the two two pictures above. NY Magazine’s “A Brief History of Slime” by Christopher Bonanos. And of course, Wikipedia

5 Replies to “FEATURED POST: A (fetid) river runs through it, the Brooklyn edition”