The other deeplings (except RickMac) are at the fantastic Science Online conference this week, meeting with other scientist communicators and hatching various plots for DSN’s ascendancy to world dominance using, I suspect, some combination of Ferragarmos, rum and giant squid tentacles.  So, I guess you’re stuck with me!  To wit: 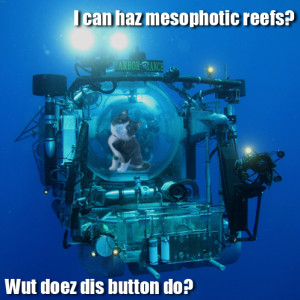 I made this bit of meme silliness while on a research cruise with Shirley in Brazil last year; we were using this sub, the Johnson Sea Link II, now retired.

I was recently lucky to host Dr. Shirley Pomponi at Georgia Aquarium for a lecture as part of our Science on Tap series.  Shirley is a sponge expert and is having a wonderful career at FAU’s Harbor Branch in Florida, a base from where she studies these interesting critters, mostly in the deep sea and mostly using human occupied vehicles (HOVs), or what the rest of us would call submersibles.  In particular, Shirley has been interested in the unusual chemical metabolism of sponges and whether some of these compounds might be useful in human medicine.  They’ve had at least 3 chemicals so far prove active against cultured cancerous cells in lab tests, and at least one drug that’s gone to clinical trials.  It seems that deep sea sponges are a veritable pharmacopeia of useful compounds.  But Shirley’s interests are not solely in the extraction of potentially useful chemicals  for the betterment of society.  Like all the best biologists (I reckon), she loves sponges for their own sake, and is never happier than when peering out into the cobalt gloom of a mesophotic reef, spying a new species of sponge, or perhaps just an old friend in a new place. 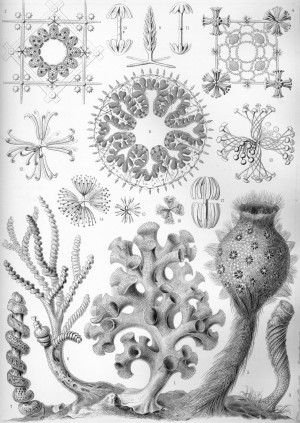 During her visit, Shirley introduced me to the wonders of glass sponges.  These marvelous organisms are deep sea specialists and some of the most exquisite animals you’re likely to find on the sea bottom; but regular sponges they are not.  By regular sponge, I mean the kind of rubbery absorbent Mediterranean jobs you might use to scrub your back in the shower (although those have largely given way to synthetic facsimiles these days).  No, if you tried to exfoliate with a glass sponge, I imagine it would be an altogether different and distinctly less pleasant experience.  That’s because, like all sponges, glass sponges have tiny skeletal elements throughout their tissue called spicules, but unlike other sponges, their spicules are made entirely of silica (quite literally glass) and very often these are fused into intricate baskets that are at once daintily beautiful and exquisitely fragile.  You might as well rub a small cactus into your face.

Glass sponges are considered a fairly early branch of the sponge family tree and they are quite different from their more springy relatives, in more ways than just their skeletons.  One important way is that throughout the majority of the sponge’s tissues, the membranes that separate one cell from another have broken down, so that the cells contents are shared throughout a continuous sheet, or what biologists would call a syncytium.  Basically it’s a sort of über-cell with thousands of nuclei scattered throughout it.  Why do this?  Well, it certainly helps to share food and waste between cells as a sort of proxy transport system (they don’t have blood vessels, or blood for that matter), and it may also be related to their unusual sensory system, which shares information about external stimuli throughout the colony much more rapidly than in other sponges.

There’s a pretty good variety of glass sponges, some of which look like regular (or demospongid) sponges, albeit far more brittle than they look, whereas some are barely recognisable as sponges at all.  They are usually pale in colour, which is pretty typical for deep sea benthic invertebrates (yeti crabs are a good example) and they can attach directly to the bottom or sometimes with stalks made up from braided glass fibers that are said to have properties identical to fiber optic cables. 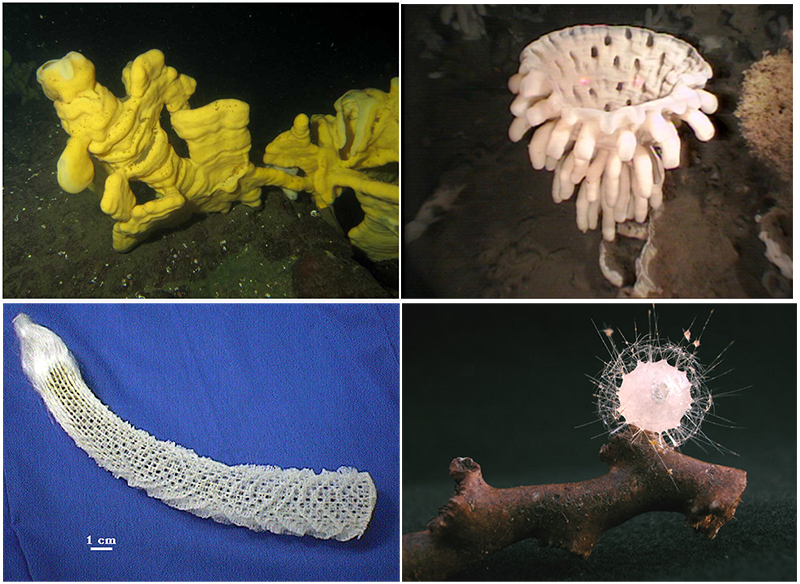 The diversity of glass sponges. Clockwise from upper left: Aphrocallistes, Chonelasma, Ihaventhefoggiestbutitsurelooksneat, and the very phallic Euplectella or Venus' basket

Glass sponges have what I’d like to call “fractal beauty”.  That is, whatever scale you look at them, they are beautiful.  Consider their spicules, many of which are shown the Haeckel diagram above (click it to embiggenate).  These skeletal elements are an exquisite mix of form and function don’t you think?  Have a look at these beauties from the Khoyatan sponge page, revealed by scanning electron microscopy:

There are even rare ecosystems based on glass sponges.  The glass sponge reefs of the Pacific northwest were fairly recently discovered.  These reefs are built on old sponge skeletons accumulating over time.  The grow very slowly in the dark cold waters of the north Pacific, and when you add in the fragility of each individual sponge, you can imagine that these reefs are particularly at risk from physical damage and destruction.  Their best defence is depth, but we humans are an ingenious lot, always looking for new and efficient ways to trash beautiful ecosystems.  Never fear, efforts are afoot to protect them, but in the meantime, videos like this one are likely to be the only way most of us ever get to see or experience glass sponges.  So, savour it, I know I am:

5 Replies to “A glass more than half full of awesome”