I must have been suffering from post conference delirium, because I decided to watch A Dolphin Tale on the plane ride home from ScienceOnline2012. Plot summary: a stranded dolphin (Winter) is rescued but her damaged tail must be amputated. A lonely boy (Sawyer) sees her being rescued, stalks her at the aquarium she is transported to, and ends up skipping school because the dolphin “needs him”. Have you thrown up in your mouth yet?

Behind the scenes at Deep-sea News, we get bombarded with gag-inducing PR e-mails about everything whale and dolphin related. Clearly they do not read our blog. They ask us to promote their upcoming movie, website, or exhibit, and we all let out a collective groan. Most recently we were asked to hype up the film Big Miracle: 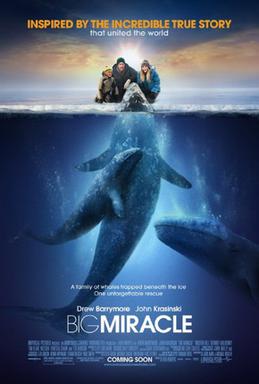 At this point I’ll also remind you of the poster for a A Dolphin Tale: 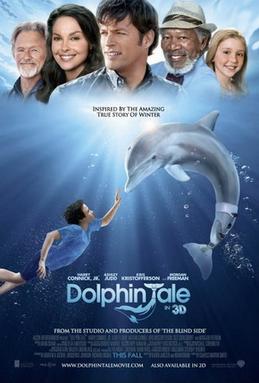 Notice any similarities? Yeah, that’s right – both of these are what I call “the money shot”.

There were so many things wrong with this film, I don’t even know where to start. First of all, the film opens with a 10 minute CGI scene of dolphins cheerfully exploring the underwater realm. They couldn’t even get the background scenery correct, because the ocean looks like a fantasy art poster or fish tank display, complete with conveniently placed archways and stone columns everywhere. At one point the dolphins start blowing bubble hoops which hover in midwater (for far too long to be scientifically plausible) and then proceed to swim through them. Midway through the film Sawyer does some nighttime frolicking with the dolphin in the pool – ha ha ha oh so happy la la la – he swims around, then repeatedly grabs Winter’s fin as the music swells. There was a propensity of slow motion underwater dolphin love. The film’s closing montage shows Sawyer and Winter amorously swimming underwater with Winter’s new prosthetic tail, as this song plays:

The movie was full of oscar-worthy lines such as:

“So you’re saying swimming like that is going to KILL her???” (in response to a muscle bulge on the dolphin’s stumpy tail)

Dad: “Every aquarium in the country says it’s hopeless. No dolphin has ever lost a tail and SURVIVED!”
Sawyer: “Well they haven’t met Winter”

“We’re here because of the most amazing friend and animal I’ve ever known…Winter and I are family now. And family is forever”

“I thought dolphins were supposed to be smart. Don’t you understand? If you don’t get the tail your’e going to die. Why won’t you just wear the tail??” (Sawyer speaking to Winter in a sad breathy whisper)

The worst thing about this film was that Mogan Freeman, of all people, starred as the army scientist constructing the prosthetic dolphin tale. WHY DID YOU AGREE TO THIS MOVIE MORGAN FREEMAN, WHY??

One laudable inclusion was the decision to show the actual rescue footage at the end of the film – although even in these brief clips you realize how unglamorous the real story was compared to the sugarcoated and shiny Hollywood version. Winter still resides at the Clearwater Aquarium in Florida, and her unique situation has apparently elevated her to “role model” status for visiting amputees.

But not even that fact will redeem this godawful film.