I had forgotten about the Order of the Science Scouts of the Exemplary Repute and Above Average Physique.  Stickers in our swag bags at Science Online quickly brought this back to my attention. Below is a list of my current badges and the activities I have participated in to achieve them.

Members are: not opposed to alcohol, fond of IPCC reports (especially the pictures), mostly in agreement with the “truth.”, into badges, grieving for the slow and miserable death of the Hubble Space Telescope, possibly possessed of supernatural powers, not in the business of total world domination,committed to the constant and diligent presentation of science stories, be it to editors, producers, directors, educators, relatives and/or friends of various ilk, in an effort to lessen the gap that is this thing we call public scientific literacy.

The “science deprives me of my bed” badge (LEVEL III). In which your science, due to Lab work or fieldwork, dictates at least a full month away from your bed. Spent time at sea aboard the R/V Polarstern in the Weddell Sea for 2.5 months.

The “talking science” badge. Required for all members. Assumes the recipient conducts himself/herself in such a manner as to talk science whenever he/she gets the chance. Not easily fazed by looks of disinterest from friends or the act of “zoning out” by well intentioned loved ones. It’s amazing I still have nonscientists friends and family.

The “MacGyver” badge. In which the recipient has demonstrated that his/her science communciation prowess was handy in simplifying a potentially challenging scenario. For example, was able to escape from unjustified prison term, with the clever use of a paper clip and WD-40. You know, that kind of thing. (Note that display of badge must be accompanied by explanation). Used Superballs as floats for equipment laying at the bottom of the Pacific Ocean at 3200 m. I can’t afford syntactic foam!

The “I blog about science” badge.In which the recipient maintains a blog where at least a quarter of the material is about science. Suffice to say, this does not include scientology. Obviously

The “arts and crafts” badge. Because you can’t have a bunch of badges without an arts and crafts badge. This one assumes the recipient has all manner of “craftiness” with a sciencegeek twist. I’m so arty and crafty, I once taught arts and crafts at a Girls Club.

The “I’m pretty confident around an open flame” badge. Recipients have demonstrated proficiency around open flames in laboratory settings. I’m confident. I just don’t know how to heat chemicals slowly or gently.

The “destroyer of quackery” badge. In which the recipient never ever backs down from an argument that pits sound science over quackery. Read this post

The “I can be a prick when it comes to science” badge. In which the recipient can be so passionate about things of a scientific nature, that he/she may appear surly, rude, and/or unpleasant.  I think I’m nice.

The “respect me – I’ve published at an upper tier publication for popular science readership” badge. In which the recipient has works in print at publications with circulations of 50,000 or higher. Wired or American Scientist?

The “I will crush you with my math prowess” badge. Seriously, scary stuff. Quantile regression (pdf)! And I programmed it in Matlab.

The “inordinately fond of invertebrate” badge. In which the recipient professes an arguably unhealthy affinity for things of this category. My dissertation was on mollusks.  Hell I spell mollusks with a k!  I weep a little inside if I have to do science on anything with a notochord and pharyngeal slits.

The “I’ve done science with no conceivable practical application” badge. There are probably more who are deserving of this badge than you would expect. My dissertation was on mollusks.  Hell I spell mollusks with a k!

The “statistical linear regression” badge. We figured that if you actually know what those three words together mean, then you deserve a badge (Yes, we know it’s a normal distribution). Statistics rock! Statistics make be a bit randy.

The “world’s foremost expert on an obscure subject” badge. In which the recipient is the leading expert in a field that few others share an interest in. Keywords include body size, mollusk, and deep sea

The “works with feces” badge. In which the recipient has worked with feces. This is all deep-sea mud is.

The “what I do for science dictates my having to wash my hands before I use the toilet” badge. Formalin and my penis do not go together.

The “I may look like a scientist, but I’m actually also a pirate” badge. I spend time at sea, drink rum like a fish, say “arrhhh” daily, own an eyepatch, and have a hook for hand.  One of these is not true.

The “I actually grew up AND became a marine biologist” badge. Out of the millions of children who aspire to work with dolphins and their ilk, this recipient is actually someone who does precisely that. Yep because the whole astronaut and medical doctor thing didn’t work out.

The “I’m a marine biologist and, to be honest, I kind of f***ing hate dolphins” badge. A more common sentiment than you would think. What is not to hate? Miriam knows what I’m talking about.

The “I somehow convinced someone to part with a lot of money for science” badge (LEVEL I). A badge for those who, over a career acting as principal investigator, have secured total research funding awards in excess of $100,000. Thanks NSF and U.S. taxpayer!

The “I use twitter to spread science” badge. Science in less than 140 characters is beautiful too. Follow me @DrCraigMc

The “my science equipment is so freaking big, that it’s bigger than where I live” badge. For example – the Large Hadron Collider? I love the smell of a research vessel in the morning.

The “I’m a scientist but people tell me I look like a celebrity” badge. It goes without saying that a link to a picture is required for this badge. You be the judge.  Me…celeb.

The “I’ve been envenomated by one of my research subjects” badge. Snakes, scorpions, other anthropods, various spiders, insects, etc. All good. Near death stories are a bonus. My hand, a research cruise, and a deep-sea urchin with hollow spines with poison sacks at their base.

The “I have survived dangerously inclement weather in the name of science” badge. In which the recipient has experience extreme weather hazards, all in the attempt to get data for science. Apparently, they are not technically called hurricanes or cyclones because they’re in the Southern Ocean. The white cross in the satellite image below is the ship I was on. 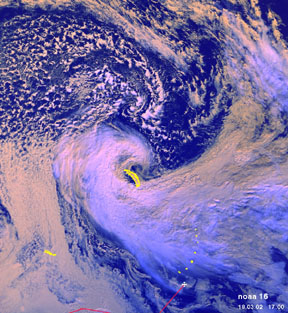 The “I have a species named after me” badge. In which the wearer is a latter day Linneaus.  I hope to earn this one next, but am waiting for Chris Mah to do actually get to work.