I celebrated another lap around the sun this weekend, and in honour of that my friend Betty, who lives in Arizona, sent me a rather awesome gift.  It wasn’t elegantly wrapped; in fact, its contents were variously contained in a decidedly pedestrian mix of old bubble wrap, styrofoam noodles and plastic bags from Target AND WalMart (wouldn’t want to discriminate).   But I have to say, I had more fun rummaging through that box than I have had in a long time, for one very simple reason.  It was a box of fossils.

I am certainly no rock hound – my geology profs at college despaired and I’ve only deliberately fossicked for fossils a few times – but like many biologists I’ve always been fascinated by the traces that animals leave behind, frozen in stone waiting to be revealed at some future date (just for us!) with the use of scientific equipment no more sophisticated than a rock hammer.  But I think it’s exactly those things that makes fossil hunting so seductive.  It’s an absolutely direct connection between you and some long-lost life form, and because it’s petrified, you don’t even have to be that gentle; you can run your fingers over every groove, joint and appendage and that somehow makes the animal so much more real.  “That animal existed and I know, because I touched it”.  And because recovering fossils is so easy (once you’ve found the right rock formations, of course), pretty much anyone can do it, which also makes it an ideal way to introduce kids to biology. 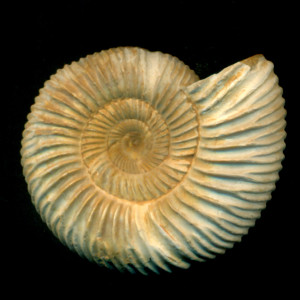 Ammonite about 3 inches across

As I sorted through Betty’s box of fossils, I enjoyed a veritable roller coaster ride of scientific emotions.  From the confusion of a piece I couldn’t immediately identify as belonging to any major animal group (it turned out to be a hyolithid), through the comforting sight of familiar critters that are still with us in largely unchanged form today (like the snail Epitonium from a Pleistocene formation in California), all the way to the pure elation of a stunning ammonite and a perfectly etched and counter shaded trilobite.  The trilobite deserves special mention, partly because I didn’t own one prior to this, and partly because, in my mind, trilobites are the quintessential fossil.  Here is an animal that crawled in great abundance and diversity through the mud of a mid-Cambrian sea, 500 million years ago.  That’s FIVE HUNDRED times a MILLION years before now; it’s so long ago it’s almost incomprehensible!  Back then all the continents were squished together and mostly clustered around the south pole, but the bit that would eventually become Utah (where this fossil came from) was a shallow sea where my trilobite eked out an existence in the mud with all his trilobite buddies and the occasional terrifying Anomalocaris.  And yet there it is today in my living room, its body still written in the dusky shale in perfect bas relief, and I can touch it.  It feels like reaching back through time.  The thing is, my trilobite isn’t particularly special as trilobites go, it’s Elrathia kingi, perhaps the single most common trilobite known, certainly in the US.  But I don’t care, it’s damn near perfect to my amateur eyes and the feelings it evokes are every bit as potent.  I can only imagine what it must feel like for palaeontologists to discover something truly out of the box (if you’re reading this and you are one, lets hear about it in the comments!).  I imagine that’s a high you can spend your entire career chasing . 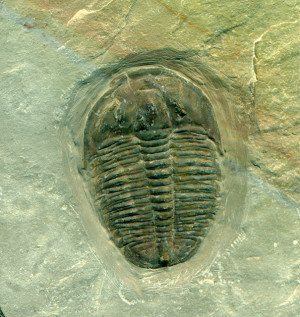 Three of the other fossils present were also worth mentioning: a bag of brachiopods, an eocrinoid called Gogia, and a sand dollar called Dendraster.  Brachiopods were among the most abundant marine animals throughout much of Palaeozoic (600 to 250 million years ago) and they still have a few relatives alive today with a body plan that has remained unchanged for a third of a billion years.  They look for all the world like clams, but the resemblance is superficial, the two halves (valves) of their shell articulate in a different way and the animal within them is not a mollusc at all but a phylum unto itself.  The eocrinoid is related to what we call sea lillies today.  These bottom dwelling animals are echinoderms distantly related to starfish and sea urchins, but turned upside down and raised up on a stony stalk so that their arms can catch passing particles of food. This one hasn’t caught a plankter for half a billion years, but you can still see every plate, hook and joint on it’s exquisite feeding arms.  The sand dollar I just included because I love sand dollars, and this is my post, so…you know…shut up… 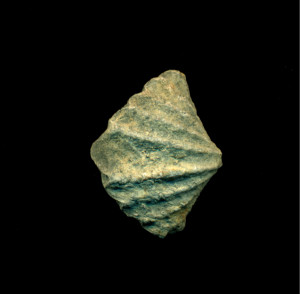 Eocrinoid Gogia from the mid Cambrian

As I emptied each bag and enjoyed each new mini-discovery, it occurred to me that the diversity of this planet is, for all practical purposes, limitless.  Think of the millions of species alive in the oceans today.  As the census of marine life showed us, we really have only scratched the surface of extant marine life in the 300-odd years since humans have really set their collective mind to cataloguing organismal diversity.  Now consider that at any given point in geological history, all of those communities that we know today – coral reefs, hydrothermal vents, mangroves, abyssal plains and so on – ALL of those had homologues comprised of completely different species, genera, families and sometimes orders and classes, than the ones we know now.  All the major phyla were in existence by the Cambrian and since then there has passed half a billion years of continuous change and turnover in these communities, with individual species and whole groups flashing in and out of existence through time.  Only some of those left fossils behind that we might ever know that they existed.  Just imagine how many species not blessed with hard body parts emerged, radiated and then disappeared without leaving any trace at all.  Now imagine how many traces are out there still, but trapped within the rocks beneath our feet, just waiting for Betty to come along with her rock hammer and bring them to light.

Fossils give us the chance to explore the biology of this planet in a totally different way, to peel back just a teeny corner of the veil of time and take a peek at lifeforms and communities long gone from the earth.  Modern expeditionary science travels to different and ever-more remote parts of this planet in search of new diversity, and we’re burning a LOT of calories on visiting other planets in search of even a single species that might show that life occurred/occurs elsewhere.  Here on earth, however, the rock hammer is an inexpensive time machine, a window to not one but hundreds or even thousands of different animal communities that can be explored, at least partially, through the fossils they left behind.  With that sort of diversity in space and in time, I’m left in awe once again of the magnificent power of biological evolution to paint this planet’s canvas with a shimmering and ever-changing mural of life. Long may it continue to do so!  For leading me to this thought and for my kick-ass trilobite, I say Thanks Betty.

5 Replies to “Extinct life is like a box of chocolates”