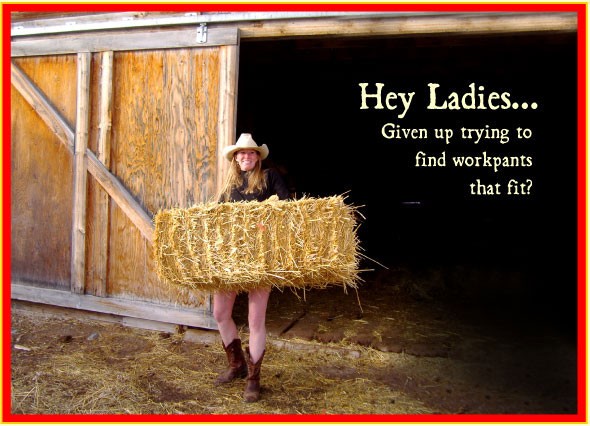 As I hope you are unaware, yesterday was the annual No Pants Subway Ride. I am shocked, SHOCKED that these people can make light of pantlessness, a serious condition that affects 7 out of 10 female marine scientists*. Oh, sure, no pants on the New York subway is easy, but when you are retrieving your gear on a pitching vessel in 15′ seas and your jeans get a giant tear in an unfortunate location and the cold wind blows through**, you will not find pantlessness to be amusing, no indeed. And ill-fitting men’s Carhartts are only one tiny half-step up from regular jeans – the waist is too big, the hips are too small, the pants crotch hangs around my mid-thigh level, and I have to belt them up somewhere around my sternum to be able to climb a ladder.

At sea this summer, plagued once again by a subpar pants situation, one of the female mates recommended that I try Red Ants Pants. Red Ants Pants makes only one main product – work pants for women. So I bought myself a pair of Red Ants Pants to give them a try. They make two cuts – “curvy” and “straight” – and I figured considering my problems with men’s pants that I’d be a curvy. Turns out that when Red Ants Pants says curvy, they mean actually “possessing of significant butt and thigh and hip curves”, not just “lady shaped compared to a dude,” and I did not meet the criteria. Despite the blow to my self-esteem, the exchange was really easy – a salesperson even called me up to chat about what cut and size I should get – and the second pair of pants in the straight cut fit much better. They are a bit tight in the hips and butt and have a little extra room in the waist (I guess I am half-curvy?), but well within comfortable parameters.

The pants themselves are badass. They’re made of canvas duck, so they’re quite stiff compared to modern jeans (especially women’s jeans made of flimsy denim and elastic). I’ve washed mine twice and they haven’t loosened up much, but I wouldn’t expect high quality canvas to break in that fast, and they are comfortable to wear as is. They are reinforced on the front of the legs and in the butt area, and have nice big pockets. The side pockets are difficult for me to use because the pants are so snug in the hips, but the lower pockets work well for knife or tools. The best part is the way they sit around my waist – the front sits just below the belly button, but the back come up higher so that there’s no chance of a plumber crack situation when crouching down or bending over.

One downside of the pants for ocean-going folks is that they’re meant to fit over boots, not get tucked into them. While people working in other areas probably like this feature, I always need to tuck my pants to avoid wicking up seawater on a wet deck. I was able to tuck the pants into my rubber boots, but it’s more of a squeeze than with regular jeans. Being made of heavy cotton canvas, if these pants get wet at sea they will never, ever dry on their own unless you’re working someplace so hot that you wouldn’t be wearing them anyway. This isn’t really a problem if you’re on a vessel large enough to have washers and dryers, but could be an issue on a smaller ships. The pants will fit under real foulie pants without a problem, but if you’re a poor student making do with cheap rain pants (like I’ve done for years), you’re going to feel a bit like a sausage.

I’ve been very happy with how my Red Ants Pants performed so far – they’re sturdy, comfortable, and fit exponentially better than equivalent men’s pants. Unfortunately, my field work for graduate school is complete and I won’t be able to sea-test them for at least a year. (Not going to sea for a year?! Tragic!) I can’t yet say how the pants will hold up over time – but I have grand hopes that I’ll NEVER BE PANTLESS AGAIN.

*I totally made this up.