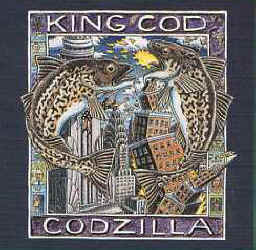 The Gulf of Maine cod fishery was deemed to be on its way to recovery in 2008, with a chance of reaching “rebuilt” status by 2014. This was great news for this historically and economically important (and very tasty) fishery. Then, this year, fisheries scientists working on the 2011 stock assessment found that Gulf of Maine cod were much worse off than originally thought. But why the sudden change? Since the 2011 stock assessment isn’t yet publicly available (though here’s a summary), there was no way of knowing other than the mediocre explanations in the media coverage.

To find out what happened, Heather Goldstone of Climatide talked to two NOAA fisheries scientists who contributed to the 2011 report. She has a great article explaining the change. An excerpt:

Well, for one, scientists now have a better handle on how quickly cod grow to a size sufficient for reproduction. Previously, estimates of what’s known as weight-at-age were based entirely on the fish that fishermen brought to the fish pier. This time around, scientists also got to look at the fish that fishermen tossed back, their discards. That’s important because there are legal size limits, so the fish that get kept are the biggest ones – not just the oldest ones, but the larges ones at a range of ages. It’s like estimating the average height of 4-yr old kids based only on the 4-yr olds that were tall enough to get on an amusement park ride. When scientists looked at the discards, they figured out that the average 4- or 5-year old cod wasn’t as big as they’d thought. And that dropped their estimates of how many fish would be reproducing each year and contributing to the population’s growth.

The other factor that Brooks and Palmer point to is two survey trawls (that’s where fishery scientists go out, drop a net over the back of the boat, and then use the fish they catch for science rather than profit) – one in 2007 and one in 2008 – which both contained extremely high numbers of fish born in 2005, far more than any of the others. Those oddballs raised some eyebrows on the 2008 asessment team, but there was no clear reason to discard the data – no errors or unusual circumstances that would explain away the high numbers. In addition, the fact that the same pattern was seen two years in a row made it seem more possible that it was real, not just a fluke. So the team decided to include the data. And, to quote Palmer, “the model chased those highs.”

4 Replies to “How did Gulf of Maine cod suddenly go from “recovering” to “overfished”?”