Most marine scientists remain blissfully unaware of the existence of tentacle-themed pornography, which originated from Japan. The paths of people who work with real life tentacle-creatures and the paths of people who envision sex with imaginary tentacle-creatures do not often cross.  So when I saw io9’s post on an upcoming tentacle porn anthology aimed at raising money for marine conservation, I had to know more. The anthology, titled Coming Together, Arm in Arm in Arm, is part of the larger Coming Together erotica series, which raises money for charity with the tagline “Doing Good While Being Bad.” Tentacle anthology editor Nobilis Reed and Coming Together series editor Alessia Brio graciously agreed to chat with me about the relationship between eroticized tentacles, marine biology, and saving the ocean.

Nobilis Reed: I have heard stories!

Nobilis Reed: Oh, certainly. In fact, I really want to see stories that transcend that stereotype. I wrote “Monster Whisperer” as a parody of a certain TV series involving pets…where tentacle monsters of various breeds are kept, domesticated.

MG: That actually leads into my next questions – are there ever creatures on the other end of those tentacles? Or is it just about the tentacles?

Alessia Brio: The same question could be asked about romance heroes.

MG: HAH! Many of the same adjectives too, I’m sure.

Nobilis Reed: Absolutely [there are creatures involved]. And not just sea creatures, either – space aliens, creatures from Lovecraftian alternate dimensions, and more. I’d love to see some stories where the “person” with the tentacles is the point-of-view character.

MG: How much of your inspiration do you draw from ocean animals? Do you ever do research for your stories?

Nobilis Reed: Actually, I did a good deal of research. I set up the schedule so that I could release the book during giant octopus mating season.

Alessia Brio: I thought that was brilliant!

MG: So is your work influenced at all by the specific mechanics of real-life cephalopod mating, such as hectocotyli (specialized sex tentacles) and spermatophores?

Nobilis Reed: Well…yes, in an ancillary way. But I used the Nautilus, at least, as the basic animal. I thought their tentacles were a bit more interesting. And in that particular case, it wasn’t looking for a mate, per se. More like a host… to say more would give away the plot of that story, and probably go past PG-13.

MG: How were nautilus tentacles interesting to you, if that won’t give too much away?

Nobilis Reed: Well, octopus and squid tentacles are not entirely symmetrical. They have suckers on one side, of course, and smooth skin on the other. They grip by means of the suckers more than anything else. Nautilus tentacles don’t have suckers. They grip by wrapping around. They’re shorter, and have ridges near the end that function something like fingerprints do on fingers.

MG: Ah, I see. Since we’re on the subject of tentacle morphology, one thing that has always alarmed me about tentacle sex is that squid tentacles are TERRIFYING, with spikes on the suckers and everything. Do people tend to make tentacles more friendly in these stories, or do they incorporate these scarier elements too?

Nobilis Reed: Well, there’s two things going on here. First of all, terror is part of the appeal, especially for women who are fans of the genre. At least, in my experience. But yes, generally speaking, people aren’t getting ripped to shreds. The creature doesn’t want to eat you… at least, not the way a real squid eats a fish. Can I link you to a picture?

MG: Sure. [typed with some trepidation] 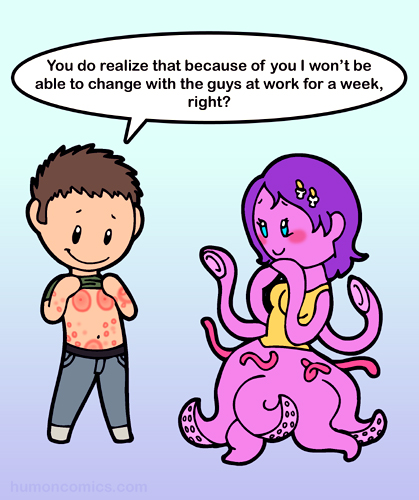 Nobilis Reed: This is a webcomic artist named Humon…one of her series is about a couple, where the heroine is a feminine tentacle monster. So yeah, some folks acknowledge that suckers leave marks.

Nobilis Reed: Well, Tentacle Dreams has been a pretty good seller for me. I wanted to do one for Coming Together, and it seemed the most appropriate. After all, we don’t have a Martian Legal Defense Fund or Friends of Otherworldly Horrors.

MG: I would totally donate to Friends of Otherwordly Horrors. Won’t somebody think of the shoggoths?

Nobilis Reed: I was thinking of starting “International Amorous Invertebrates Association.” The acronym IAIA seemed perfect. But running a charity is a lot of work, and I’d rather write.

MG: [could not type for a moment, laughing too hard at IAIA. If you have no idea why, go here.]

MG: How did you get involved, Alessia?

Nobilis Reed: Alessia and I met at a science fiction convention.

MG: To bring it back around to the tentacles, how did you select Oceana as your charity of choice?

Nobilis Reed: I went to a website called Charity Navigator, which rates charities by transparency, accountability and finances. Oceana scored very high, and I went to the website and looked it over. Since my readers are global, I wanted a charity that was global in scope.

MG: Where can people buy the book?

Alessia Brio: The book will be available in ebook via all major outlets & in print via Amazon.com.

MG: Thank you so much for your time, and for saving the oceans in a most unusual way!