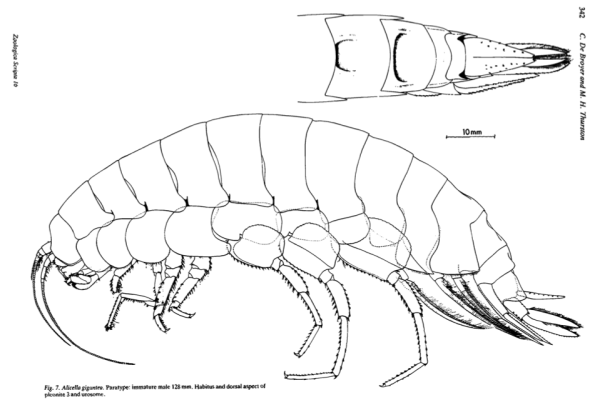 In 1899 a French zoologist named Edouard Chevreux with an inordinate fondness for crustaceans officially described two crustaceans from the deepest parts of the ocean. Over 100 hundred years later, scientists have collected less than two dozen specimens of this enigmatic shellfish, shocking given that is largest species of amphipod ever known.

Within Crustacean there are multiple orders, including the order Malacostraca that contains crayfish, crabs, lobsters, and shrimp. Among these orders is also Amphipoda. At 7000 plus species it is one of the most important groups of crustaceans in the oceans. Amphipods are distinctive in containing no carapace but rather being divided up into 13 individually shelled segments. Their name comes from one of their distinguishing features, their thoracic legs are not all alike. Most adult amphipods wouldn’t make an inch or two in length.

Two male amphipods in 1897 were caught off the Canary Island from 3.6 miles deep. Although both were juveniles, the largest measured in at nearly 5 inches. What did Chevreux think when he first encountered these two giants. He would have been well aware that these were unique. With hundreds of publications to his name, the prolific Chevreux described several species of crustaceans including amphipods. Over his 85-year life (1846-1931), he gained such prominence that in 1910 the French Antarctic Expedition named a 1,615 high mountain on the Antarctic Peninsula for him.

Chevreux name this new species Alicella gigantea. And for a hundred of years they were never seen again. In the 1970’s, work led by Robert Hessler from Scripps photographed several potential Alicella on the deep sea floor. In 1986, our specimen count was just 16, including those described by Chevreux and one regurgitated by an Albatross. 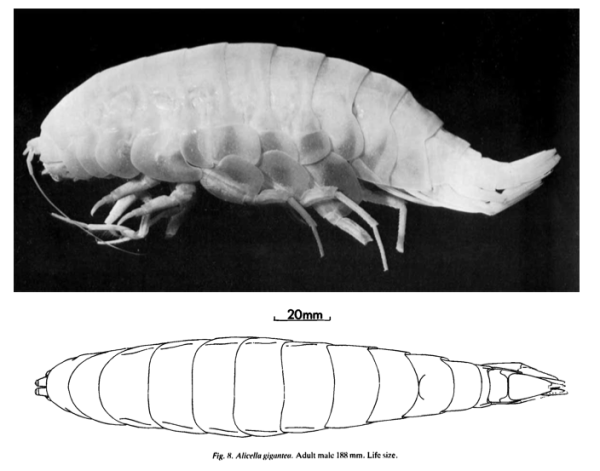 The largest is a female at 13.4 inches in length. Interestingly, the common name of ‘supergiant’ didn’t come until 1986 when Barnard and Ingram described three new individuals from the Pacific including the aforementioned big female. Upon their collection, it was uncertain if these large specimens were the same as the smaller specimens from the Atlantic. These new specimens were tentatively called ‘supergiants’ to keep distinguish them from their Atlantic brethren. Barnard and Ingram concluded that although the ‘supergiants’ were Alicella gigantea, the Pacific were slightly different than the description of the Atlantic specimens by Chevreux. Later work by Broyer and Thurston, who examined all of the specimens of Alicella gigantea, found no differences between the Atlantic and Pacific specimens that could not be accounted for by differences in maturity.

Last month, several new potential specimens of ‘supergiants’ were caught in a baited trap 4 miles deep in the Kermadec Trench off the northeast coast of New Zealand. The leaders of this expedition, Ashley Rowden and Alan Jaimieson are cautious in saying these are Alicella gigantea as a more careful examination of their morphology and genetics is needed. But photographs of these new specimens clearly suggest this is either a ‘supergiant’ or closely related. These new specimens extend the geographic range of ‘supergiants’ to far south Pacific Ocean.

Supergiants are perplexing not only because their size is nearly 20 times that of other amphipods but because they’re oddly rare. Despite the relatively few individuals of ‘supergiants’ known, their distribution spans both the Atlantic and Pacific and covers over 2.5 miles of depth (1.06-3.64 miles). My former advisor Michael Rex would say this is “uncommon form of rarity”. In describing an unusual species of snail, Mike noted that despite being known from the all over the Atlantic Ocean the snail was known from just a handful of specimens and never more than one or two from any location. This is unusual as species that are geographically widespread are also often abundant. Think house sparrows. Conversely species rarely found or occurring in low densities are not typically found geographically widespread. Thus an uncommon form of rarity.

One Reply to “The Large But Enigmatic Supergiant”