Echinoderms are one of the most highly derived groups of animals with many species as significant components of several marine communities. They’re classified by three fundamental shared characteristics: 1) pentaradial symmetry, 2) skeleton made of three-dimensional calcitic elements, and 3) the presence of a water vascular system with an external opening. This water-vascular system (WVS), in particular, remains a unique application of a hydraulic system, generating pressure gradients that are able to command hundreds of tiny, adorable tube feet to crawl over uneven surfaces and feeding on tough shelled prey like mussels.

The basic components of the WVS in non-crinoid echinoderms (below) include a circumoral ring canal with five radial canals extending from off of it. Also attached to the ring canal is the madreporite, which acts as a door between the external environment of the sea and the internal environment of the echinoderm. The madreporite, named after its resemblance to the Madreporaria coral (meaning “mother of the pores”), is lined with cells that beat tail-like flagella in a variety of directions.The fluid inside the WVS is similar to seawater in composition but contains up to 60% more potassium ions, slightly higher concentrations of chloride ions, and freely floating albuminous protein. Sea cucumbers have also been found to have red blood cells in their WVS.

Each radial canal has serially repeating pairs of shorter canals that attach to the tube feet, which are operated by muscle contraction of the ampullae located directly over them. Think turkey baster: when you squeeze the bulb it pushes fluid out the baster end, let go of the pressure and it sucks fluid back in toward the bulb. Crinoids differ because they lack both these shorter canals and ampullae and their tube feet occur in groups of three coming directly from a canal similar to the radial canal. 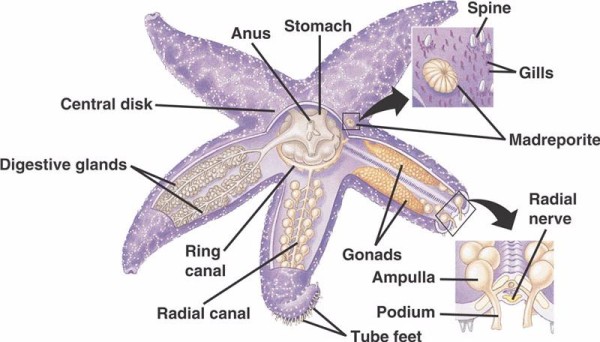 The evolutionary history of the echinoderm dates back to the early Cambrian and they rapidly diversified. Today, only the five classes are present (represented in the graphic at top). Their radial symmetry is only slightly misleading. Genetic studies suggest that echinoderm evolution occurred by means of extensive mutation in regulatory genes inherited from bilateral ancestors. Early theories about the origin of this group included the ‘pentacula’ and ‘dipleurula’ ideas. The former was postulated first and assumes pentaradial symmetry evolved before the formation of the WVS while the latter is based on the earliest recognizable larval stage common to the modern classes of echinoderms.

Crinoids retain the most primitive form of the WVS. Tube feet were believed to originally been used entirely for respiration as well as feeding structures, but fossil eocrinoids have distinct pores between skeletal plates that led Nichols (1972) to conclude that the tube feet system was not very extensive in early in crinoid evolution. But he doesn’t give consideration to other interpretations of the structures, such as openings for internal parts related to locomotion or feeding and unrelated to respiration. Carpoids, such as Gyrocystis and Dendrocystites, found in middle Cambrian sediments are considered basal to the echinoderm lineage due to similarity in skeletal elements and are hypothesized to have soft, protractible internal tentacular structures. The existence of a primitive WVS is inconclusive in the fossil record of carpoids, yet the it is considered to have evolved prior to other echinoderm characteristics. The earliest suggestion of anything like a WVS comes from the Helicoplacoidea found in lower Cambrian deposits (noted by the presence of highly organized rows of ambulacral pores). According to Paul (1977) no modern class has diverged from the carpoids, which has been extinct since the Mesozoic. Helicoplacoids, with triradial symmetry, diverged very early from the carpoids and the rest of the echinoderm lineage evolved upon the Helicoplacoid bauplan.

While the echinoderm family tree is not entirely worked out, they experienced a short diversification event during the Cambrian and Ordivician and the basic bauplan has since remained little changed. The four non-crinoid classes have similar structure and function in their WVS. Holothuroids are likely the most derived at the class level, because their bucchal feeding tentacles are extended from the circumoral ring canal and contain no skeletal elements. The recently discovered Xyloplax (left), a strange sort of sea star, has a more unique WVS arrangement: a novel system with double ring canals containing inter-radial connections and mono-serial set of  tube feet. Janies and McEdward (1994) suggest that  the unique geometry of the its WVS evolved via a modification in the developmental mechanism of a juvenile velatid Asteroid. This case represents the most modern and derived evolution of the WVS.

The echinoderm’s rapid diversification, lack of good preservation and the absence of more than one type specimen for comparing obscure fossil classes presents problems when attempting to explain their evolutionary history. The WVS is not, strictly speaking, only an unique echinoderm characteristic. There are similarities to structures in the hemichordates and the hydraulically-operated lophophore. Not mention that embryological characteristics of echinoderms are also shared among chordates, hemichordates, and the lophophorates. Additionally, the ring canal developed from a U-shaped precursor that  eventually fuses together during ontogeny to form the ring we see in echinoderms today. This seems to fit with Nichols’ (1967, 1972) theory that echinoderms shared an ancestry with a lophophorate-like predecessor, which also have U-shaped guts in both larval and adult forms.

The WVS is a unique and, in today’s echinoderms, successful innovation. It seems plausible that the intricate network of canals could have been built upon pre-existing anatomical structures, such as the lophophore and U-shaped gut of a lophophate-like common ancestor, but the evidence is unclear. What is striking to me is that such an innovation is not present in other phyla. The WVS probably arose as a feeding structure in early sessile echinoderms, as evidenced by fossil interpretations, and secondarily became used for locomotion. Another interpretation may be that the WVS evolved more than once among extinct and extant echinoderms for different purposes (i.e. respiration, feeding, locomotion). Either way, the WVS is an amazing adaptation among the Echinodermata.

One Reply to “Veins of Water: The Evolution of the Echinoderm Water-Vascular System”