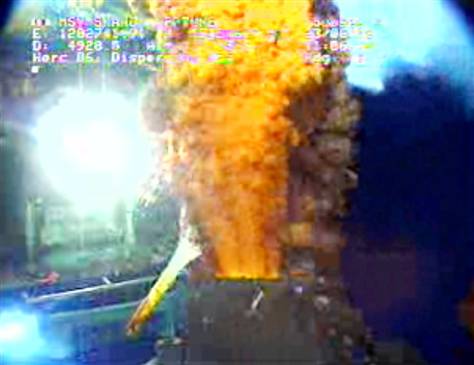 Last Friday was the 2 year anniversary of the Deepwater Horizon disaster in the Gulf of Mexico. The ramifications of the vast amount of oil and dispersant polluting the Gulf are still becoming clear, but the problem hasn’t gone away, nor is it likely to.

Gulf of Mexico fishermen, scientists and seafood processors have told Al Jazeera they are finding disturbing numbers of mutated shrimp, crab and fish that they believe are deformed by chemicals released during BP’s 2010 oil disaster.

Along with collapsing fisheries, signs of malignant impact on the regional ecosystem are ominous: horribly mutated shrimp, fish with oozing sores, underdeveloped blue crabs lacking claws, eyeless crabs and shrimp – and interviewees’ fingers point towards BP’s oil pollution disaster as being the cause.

What is missing is the accountability that comes from real consequences: a criminal prosecution that holds responsible the individuals who gambled with the lives of BP’s contractors and the ecosystem of the Gulf of Mexico. Only such an outcome can rebuild trust in an oil industry that asks for the public’s faith so that it can drill more along the nation’s coastlines. And perhaps only such an outcome can keep BP in line and can keep an accident like the Deepwater Horizon disaster from happening again.

Throughout the spill, the two women played an inside-out game.

Lubchenco was one of the government’s most public faces. She walked Florida, and the world, through the vagaries of the Loop Current. She closed swaths of the ocean to fishing. She confirmed — too slowly for the public’s liking — the existence of deepwater oil. And she led the assessment, still ongoing, of the oil’s long-term damage to the Gulf.

Meanwhile, McNutt was sequestered at BP PLC headquarters in Houston. A three-day stay had migrated into a months-long sojourn. She led assessments of the amount of oil flowing into the ocean. She convened a secretive team of researchers who helped dictate the government’s long-term strategy. And when the time came to seal the well, McNutt helped broker a peace between BP’s engineers and outside scientists.

[UPDATE 09:30 PDT]: Hannah Waters at the Smithsonian has a short post and a slideshow showing what wildlife has recovered, and what will be damaged for many years to come.

Only one thing is certain: that scientists need more time to fully understand the impacts of the oil spill. “There’s still a lot we don’t know about how this spill altered the food web of the Gulf of Mexico ecosystem,” says Samantha Joye, who studies marine chemistry and microbes at the University of Georgia. “We’re trying to understand very complicated interactions and feedbacks in a dynamic, constantly-changing system, and it’s going to take time.”

H/T to @oceansresearch for some of the links.