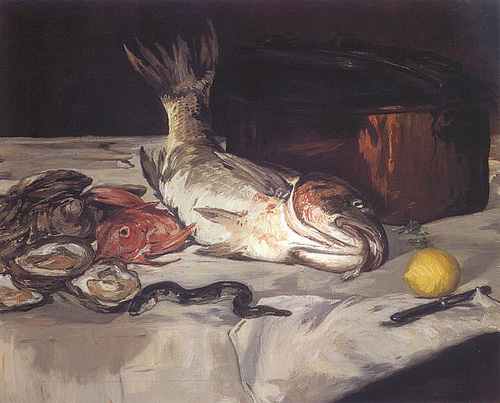 When I wrote about Wicked Tuna, the National Geographic channel’s Atlantic bluefin tuna fishing reality show (first aired Sunday night), I thought it would be pretty straightforward. Every rating system  – Seafood Watch, Sea Choice, Blue Ocean Institute – lists Atlantic bluefin as an “Avoid.” A look through the scientific literature – though I am not a tuna or fisheries expert – showed a vast gap between the fisheries literature, which focuses on bluefin population structure , and the conservation literature, which is trying to sound the alarm about bluefin’s decline. Frankly, I didn’t think it would be terribly controversial to argue that a purportedly conservation-focused organization like National Geographic shouldn’t encourage consumption of Atlantic bluefin tuna.

So I was pretty surprised when two very different scientists, Lee Crockett, Director of Federal Fisheries Policy at the Pew Environment Group and Dr. Molly Lutcavage, Director of the Large Pelagics Research Center at U Mass-Amherst disagreed with my perspective. (I was offered a chance to talk with Crockett about bluefin before the post went up, but the scheduling didn’t work out until afterwards. Dr. Lutcavage reached out to DSN in response to the post.) Both of these tuna experts believe that Wicked Tuna is good publicity for the Atlantic bluefin.

Crockett sees Wicked Tuna as an opportunity to educate the public as to what fisheries should look like. He said, “Most people have no clue where their fish come from. This show gives a sense of what fishing is actually like. Pew is supportive of small scale selective fishermen – they’re the kind of fishermen we ought to be supporting since they are selective and catch what they target. Unless you are opposed to all fishing, these are the kind of fisheries we ought to be promoting.”

I asked him if the show was misleading, since most Americans are not eating tuna caught with hand gear – the most popular seafoods in America are farmed shrimp, farmed salmon, and canned tuna (which is mostly caught with far less selective longlining or purse seining). He pointed out that bluefin is indeed a niche market in the United States, but “I look at it the same way National Geographic looks at it – the show is educating people in an entertaining way about bluefin and different types of fishing. They’re educating the public and getting them to understand where their food comes from.” While Americans aren’t eating significant amounts of tuna caught with hand gear, “the show itself is an opportunity to educate them about fishing, types of fishing and general principles that are useful.” Since Pew’s bluefin tuna conservation efforts focus on reducing longline bycatch of spawning adults and other marine wildlife in the Gulf of Mexico, increasing the public understanding of fishing gear is critical to their work.

Dr. Lutcavage had a much more basic disagreement – she says there are far more bluefin tuna in the Atlantic than have been reported in the stock assessments. She said, “We lack some of the most basic knowledge on life history and population status. We don’t know how they [the tuna] utilize the oceans.” In order to see as many commercially sized bluefin as we do, Lutcavage said, “the numbers of juveniles must be huge.” She noted that in 1993, the bluefin tuna stock assessment indicated that there were only 7000 adults left, but that aerial surveys  “counted a couple hundred thousand in a small area.” According to Lutcavage, “No one ever made corrections.”

Lutcavage, who was interviewed for Wicked Tuna‘s website, was frustrated with the way that scientific uncertainty is communicated in fisheries management. “The story represented in the media is not good science and doesn’t represent what the state of the art is…stuff people are touting is wrong. No one does cleanup in the media.” Scientists “need to look back and see how we did…getting it right is important and not getting it right has impacts.”

I asked both Crockett and Lutcavage if people should eat Atlantic bluefin tuna. Both stressed that overfishing is occurring in the eastern Atlantic and Mediterranean, and that the western Atlantic was relatively well managed. Crockett encouraged people to learn more about fisheries. “Wicked Tuna is useful because it is raising people’s awareness in a way that is entertaining.  And then you throw in a conservation message, there’s a greater chance of it resonating and sticking with them a little bit. People see the PSAs that go along with it [Wicked Tuna], they click on a website, and learn some more.” Lutcavage stressed that what you eat is a personal choice, but that she herself “would not eat a fish caught in the Mediterranean until they are complying with [ICCAT] quotas. I support our local fisheries fishing responsibly and sustainably.”

So will Wicked Tuna really educate people about the advantages of hand gear is over purse seining or longlining, and about regulatory uncertainty in fisheries management? I haven’t seen the show yet, so I can’t say. I can say this – these conversations threw me into a bit of a fisheries existential crisis. If a marine scientist such as myself can’t read through the peer-reviewed scientific literature and ICCAT stock assessments and form a reasonable opinion on whether eating Atlantic bluefin tuna is Good or Bad, what hope does the general public have? I imagined trying to explain the complexities of the Wicked Tuna fishery to my sushi-loving non-scientist sister who lives north of Boston, not far from Gloucester.

Me: “Hey, did you know that you can eat bluefin tuna caught in Gloucester? There’s a TV show!”
Sister: “Cool! How do you know if the tuna comes from Gloucester?”
Me: “Well, ask the server.”
Sister: “You want me to give a fish quiz to the server? What if they don’t know? Or don’t speak good English?”
Me: “Ask them to ask the chef.”
Sister: “Ummm…ok.”
Me: “But be careful because a lot of bluefin that’s sold is ranched and that’s bad.”
Sister: “Ranched?”
Me: “Unless the fish is mislabeled. So actually it may not be bluefin tuna at all.”
Sister: “You know, I like eel too.”
Me: “But eel is bad!”
Sister: “So, how about those Red Sox?”
Me: “What? Since when do we talk about baseball?”
Sister: “But it’s better than listening to THIS.”

Over the past years I’ve had many of these encounters. While seafood-choice style cards work for the informed consumer purchasing their fish from fishmongers or higher-end restaurants, they’re pretty challenging to use in a more general market. My family, all of whom are dedicated chain supermarket fish counter customers, call me from the fish counter on occasion to ask if something is “good” or “bad.” It’s astonishingly difficult to figure out – just last week my father told me proudly that he purchased steelhead and wasn’t that a good choice? I did a double take. Steelhead? Federally-listed-as-threatened steelhead? At the supermarket? But then I realized it was probably just regular farmed rainbow trout, marketed under a fancier-sounding name. Even an informed consumer is dependent upon correct labeling and provenance – and seafood mislabeling is rampant. I’ve even been outright lied to in restaurants by servers who just don’t want to deal with a Portlandia-style inquisition.

Maybe the biggest value of the controversy over Wicked Tuna will be the spotlight that it shines on the complexity of sustainable fisheries. As Crockett said in our conversation, “The hardest thing we have is getting people to listen. Wicked Tuna may be an entry point to get people to pay attention.”

BEFORE COMMENTING READ THIS: Critical comments are welcome, but comments containing personal insults will be deleted without warning.

Share the post "Eating Wicked Tuna: A marine scientist tries to figure out what the heck is going on"

13 Replies to “Eating Wicked Tuna: A marine scientist tries to figure out what the heck is going on”