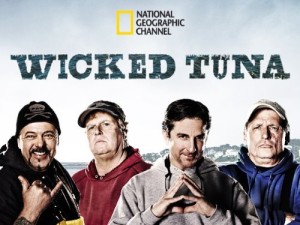 As a followup to Monday’s post on the National Geographic Atlantic bluefin-hunting reality TV show Wicked Tuna, I wanted to highlight some other perspectives. Please go ahead and post those I missed in the comments.

From the Center for American Progress (h/t Cameron Coates):

Bluefin tuna is one of the poster children for overfishing. So one might expect that “Wicked Tuna,” the National Geographic Channel’s new series about bluefin tuna fishermen in Gloucester, Massachusetts, would take a fairly conservation-minded perspective on fishermen’s efforts to capture these majestic giants, some of which can grow to more than 1,000 pounds and more than eight feet in length.

In fact, National Geographic deals its viewers a fairly even-handed look at the bluefin tuna. And ultimately, the takeaway message may be that ironically the best way Americans can help save this fish is by supporting New England’s artisanal bluefin fishery.

From Lee Crockett of Pew Environment, whom I interviewed for Monday’s post:

When ads for the show began appearing, it was not surprising that “Wicked Tuna” attracted a lot of attention, both positive and negative. Some say National Geographic is glorifying the killing of a threatened species and the program will increase the demand for bluefin, further jeopardizing its survival. Others responded that the series simply portrays a group of hard-working fishermen going about their lives, following in the footsteps of generations of New Englanders who came before them.

As is often the case, the truth may fall between these two positions.

From the Center for Biological Diversity:

“Bluefin tuna has been called ‘cocaine of the seas’ because of the astronomical prices it fetches as luxury sushi. Its economic value should encourage us to save the species to sustain tuna fisheries into the future. Instead, we’re seeing places like the National Geographic Channel buy into bluefin fever, glorifying the chase for one of the most troubled fish on the planet,” said Catherine Kilduff of the Center for Biological Diversity, which launched a U.S. boycott of bluefin tuna in 2010 following dramatic declines in its populations.

The dilemma I have in deciding to watch the show is that NatGeo may be glorifying the bluefin tuna as a species of consumption so that people start ordering it more. But, folks need to understand the repercussions and ask one more question, “Is this bluefin tuna caught in the U.S.?”

Contrary to worst fears, the show’s first episode did not glorify the fishing. Contrary to romanticizing the fishery, I felt, the show can make one feel that this isn’t an attractive way to try to turn a profit. These guys are addicted gamblers, gambling on getting a bite, themselves lured into a high-stakes game, and prompted to work even in dangerous weather.

And from Sea Monster Blog, why the western Pacific tropical tuna talks collapsed this week – not directly about Atlantic bluefin, but covering many of the same problems with managing large oceanic species that don’t care about national borders:

But despite clear advice from the Commission’s scientific committee that further measures were required to address overfishing of bigeye tuna, the Commission couldn’t agree how members should distribute the “burden of conservation”.