CITES is the 1973 Convention on International Trade in Endangered Species, to which 175 nations are signatories.  Along with the IUCN Red List, it’s one of the main ways that the international conservation status of a species is recognised (IUCN) and regulated (CITES).  The main mechanism for this at CITES is through listing of a species in the “Appendix” of the CITES treaty.  Appendix I species are the ones most at risk of going extinct; moving whole or part of any Appendix I species alive or dead across international borders is a big no-no, with rare exceptions for strictly-controlled and permitted scientific research.  Appendix II species are less immediately threatened, and international trade in these organisms or any part thereof is regulated by import/export permits from the originating country.  You can think of Appendix I species as being in the batters box of exctinction, whereas Appendix II species are just in the on-deck circle…

Periodically the signatories to CITES meet to discuss changes to the Appendices and the next one of these is coming up in Thailand in March 2013.  Why this is important right now is that the US government filed a Federal Register Notice yesterday announcing which species they do, and more importantly don’t intend to bring up at that meeting.  Here they are:

Species the US will propose:

Species on which the US is undecided:

Species the US will not propose: 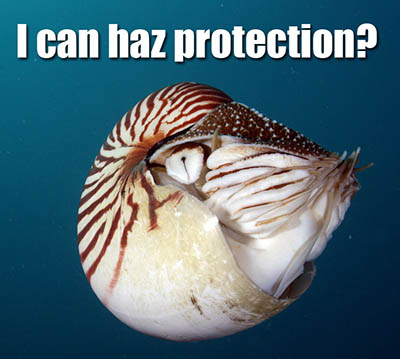 Tough luck Nautilus. Perhaps you could lose the calcified hoodie, or try being fluffier or something...

So, yeah, that doesn’t read so well.  The idea that no marine species at all will be proposed is cognitively dissonant with the avalanche of news and science that says that the oceans and their inhabitants are in imperiled.

But, all is not lost!  This list is not finalised.  In fact, part of the point of the federal register notice is to provide interested parties with a chance to speak for one or more species.  It’s not a simple case of saying loudly “save the dusky shark!”, though, the lobbying must be for those in the “undecided” category (not the “will not propose”) and must based on solidly referenced science.  Over the next 6 months, USFWS will be speaking to various scientific and conservation groups about the undecided species listed above, and hopefully some (any? just one? pretty please?) marine species can get moved to the “will propose” column.  Another register announcement will come later stating which cases definitely will and wont be made.

What is more disappointing perhaps is the great number of species that will not be proposed by the US, at least not without some earth shattering new science in the next 6 months or so.  As we’ve discussed here, emotions run high about some of these, but in most of the cases above, there seems to be enough science to at least not rule them out.  Bluefin tuna, narwhals, hammerhead sharks and Nautilus all stand out to me as species that are in clear need of need stricter protections. Unfortunately, the list as it presently reads errs on the side of inaction rather than conservation, which is clearly a missed opportunity.  I am sure that they would argue that this represents conservative error – don’t do anything until you are absolutely sure that it’s needed.  The problem with that is that proof is an elusive thing in science.  To be truly conservative, I would err in the opposite direction: protection until evidence is gathered to suggest that it isn’t needed.

I can’t see that mentality changing anytime soon though, so it looks like we either need to wait on more science, or we have to rely on one of the other signatories to propose them for inclusion.  Even then, if the decision is based on the common body of scientific knowledge, the result may be the same.

Read the notice for yourself here.

11 Replies to “Will marine conservation miss out at the next CITES meeting?”