A paper by Marc Nadon and colleagues from  U. Hawaii and U Miami RSMAS has been getting a good bit of press lately (see here and here and here), and rightly so, it’s an interesting and important subject.  They studied populations of reef sharks in the Pacific and attempted to reconstruct what the “starting” populations would have been before human activities began to affect them and before anyone thought to monitor reef shark populations.  Sort of a reverse forecast.  Their models indicate that many reef shark populations like grey reef sharks and white tip reef sharks  may have dropped as much as 90%.  This is important because most studies up to this point have focused on pelagic sharks like makos and tiger sharks, which have been fairly obviously decimated by the finning trade and other problems.  To learn that declines in smaller, reef-associated sharks are similar is fairly grim news.

Sometimes when you read a paper, one statement or figure sticks out and in the Nadon paper it’s their Figure 3(c), and here it is: 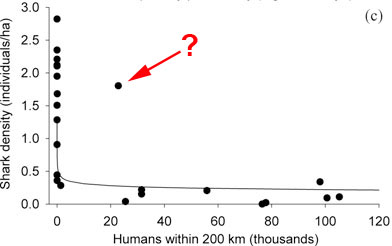 In this figure Nadon and his colleagues show the relationship between the density of sharks measured by towed diver surveys (how do I get THAT job?), and the number of humans living within 200km of the sampling site.  A couple of things jump out at me in this interesting figure.  The first is that the relationship is heavily, heavily skewed.  It’s so skewed that plotting a curve on it actually seems fairly pointless. What we appear to be dealing with is a sort of binary situation.  If there are no people living near the sampling site, then shark numbers are in the 0.5-3.0/ha range, but if there are  people living within 200 klicks – any number of people – then there are effectively no sharks present.  I might have tried a log scale on the x-axis to give better resolution at the low population end, but there are few data points there anyway, which is a bit frustrating but probably just reflects the difference between populated and unpopulated islands.  There’s also one outlier, which I marked with a red arrow; I really wish they’d labeled that one, because it’s so different from all the others and outliers are always interesting. (aside: I think it was Steven Jay Gould who said that if you want to know how normal folks think, one thoughtful deviant will tell you more than a thousand solid citizens)

A binary relationship between the abundance of sharks and that of people is effectively saying that they are mutually exclusive: people = no sharks, no people = sharks.  That’s a pretty disappointing thought.  Of course it doesn’t tell us the mechanism, or even if the relationship is causal in any way, but I don’t think it’s a huge leap to suggest that human impacts on reef diversity and function in general, especially overfishing, are likely to put a pretty negative pressure on reef shark populations.  If this proves true then it may not be that humans are doing anything to the sharks per se, just not looking after the reef generally, and that is being reflected at the top trophic level.  However you slice it, their results are more grist to the mill that we need to be doing a better job with the conservation of both reefs and sharks, because sometimes those two things are inextricably intertwined.

The Nadon paper is open access; you can read it here

13 Replies to “Are humans and reefs sharks mutually exclusive?”