eBay’s history is dotted with carcasses of endangered and vulnerable species.  In 2000, the Sea Turtle Conservancy announced that a large selection of illegal hawksbill turtle shell products were available on the online auction site.

“On Jan. 6, about about 50 genuine tortoise shell items were listed for sale through ebay, said Gary Appelson, advocacy coordinator for the nonprofit Caribbean Conservation Corporation (CCC). The illegal products included intricately designed hair ornaments and glasses cases. The bidding on an unworked “scute” or piece of hawksbill shell was at $480, with nearly 30 bids registered. The seller, listed only as “isabeII4,” said it was “perfectly legal” to sell the piece because it had been given as a gift many years ago, implying that it was originally purchased before the Endangered Species Act was passed. IsabeII4 suggested that the piece, when worked, would make several sets of wrist cuffs or hair combs.”

In 2007 an International Fund for Animal Welfare probe also found endangered species or products from them being traded illegally on eBay.

“An IFAW report in 2007 revealed that at least 90% of all investigated ivory listings on eBay were legally suspect. Furthermore, [a] released 2008 IFAW investigation revealed that ivory traded on eBay significantly increased in the United States since the 2007 report.”

That 2008 report found that two-thirds of the online trade in endangered animals, especially ivory from elephants, occurred on eBay.

eBay has enacted policies but many have found these polices to be inadequate and nearly impossible to enforce.  In 2006, eBay banned the sale of smalltooth sawfish, an endangered species, but inly in response to pressure from the Ocean Conservancy.

But issues with endangered and vulnerable species for sale at eBay persist.  In 2010, a couple who used eBay to sell endangered animals they had taxidermied.

Earlier this year Alexis Rudd, a graduate student in the Department of Biology at the University of Hawai’I, posted to Twitter (@SoundingTheSea) fidning endangered Hawaiian land snails on Ebay and Etsy. 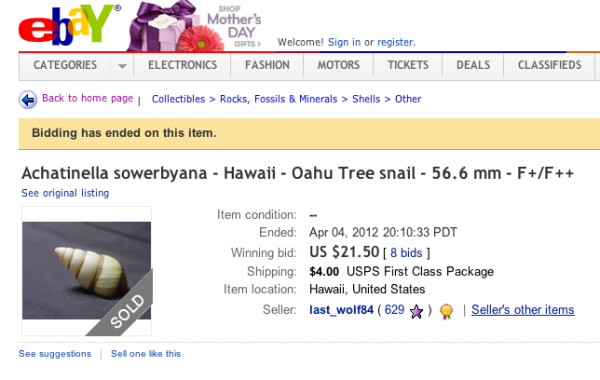 All this has come to our attention at DSN when the Miami NewTimes published the story “Coral Reefs Are Being Decimated, All for a Few Gaudy Trinkets”

“Kate Lunz didn’t know what to expect as she piloted her white Florida Fish and Wildlife Conservation Commission truck to the Port of Tampa in July 2010. The day before, customs authorities had called the 32-year-old, PhD-toting marine biologist and asked her to inspect the contents of two 40-foot shipping containers that had been sent from the Solomon Islands and pulled for investigation… The sight devastated Lunz. The rubble was actually a giant batch of stony coral — an order scientifically known as Scleractinia — an exceptionally fragile animal that’s vital to the health of the world’s oceans. Thousands of pieces had been plundered from the South Pacific and shipped halfway around the world to be cleaned, turned into tourist trinkets, and sold down the coast of Florida at a staggering markup.”

So the question we at DSN asked is where all this coral might have ended up if not confiscated.  A substantial number were likely to end up on eBay. Keep in mind that the Fiji is the #1 exporter of coral for the curio (decorative) trade and live rock (aquarium) trade.  The US is the #1 importer of Fiji coral.

Ebay’s policies explicitly forbid sales of endangered species or parts thereof and carries other specific prohibitions including walrus tusks and whale bones, including scrimshaw and any other item made of marine mammals, no matter when produced.  No seabirds or their feathers, eggs or nests. Nothing made of turtle shells. Nothing from polar bears. As well CITES permitting must be followed.

Appendix II lists species that are not necessarily now threatened with extinction but that may become so unless trade is closely controlled. It also includes so-called “look-alike species”, i.e. species of which the specimens in trade look like those of species listed for conservation reasons (see Article II, paragraph 2 of the Convention). International trade in specimens of Appendix-II species may be authorized by the granting of an export permit or re-export certificate. No import permit is necessary for these species under CITES (although a permit is needed in some countries that have taken stricter measures than CITES requires). Permits or certificates should only be granted if the relevant authorities are satisfied that certain conditions are met, above all that trade will not be detrimental to the survival of the species in the wild. (See Article IV of the Convention).

To reiterate an exporting but not importing permit is required.  In just a quick search Al, aka para_sight here at DSN, found multiple examples

We are not saying these are illegal activities but there is no proof by either the seller or eBay that permitting requirements have been met. Although, we at DSN are opposed to any selling or purchasing of corals as harvesting corals causes considerable habitat destruction and degradation of reefs. 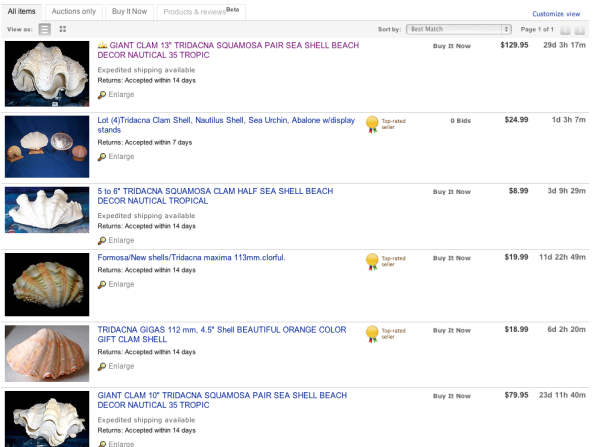 In my own searching I found some suspect marine and freshwater mollusks.  Freshwater streams and lakes throughout the U.S. possess endemic clams.  Many of these because of their rarity and anthropogenic threats occur on CITES lists, including the most severe Appendix 1.  None of these protected freshwater clams occur on eBay.  However, these species are extremely difficult to tell apart even by experts.  How do we know if these species are actually the nonprotected species?  Likewise, several species of the Giant Clam, Tridacna, occur on the Appendix II.  Exporting and quotas from key countries are heavily regulated.  How do we know if the 166 specimens of Tridacna listed on eBay have met CITES requirements?  We don’t.

All this suggests that eBay has not went far enough to protect vulnerable and endangered species.  No evidence exists to instill any confidence in buyers that items on eBay can be legally sold.  Is eBay still a blackmarket for protected animals? I can’t tell but for now its best not to buy from eBay until I can be.