You might have seen the headlines last week: Big rise in North Pacific plastic waste, Plastic in ‘Great Pacific Garbage Patch’ increases 100-fold, Ocean Trash is a Lifesaver for Insects, and so forth. These were based on a paper that I wrote with two co-authors, which came out in Biology Letters last week. Because the paper has gotten so much media attention already – including my very first Ed Yong original! – I’m not going to blog about the paper directly. Instead, I’m going to give you a glimpse behind the scenes. Since scientists-vs-media is a perennially hot topic on science blogland, I’ll explain how we prepared for and managed the media in order to achieve coverage with which we were mostly quite happy.

Having worked on North Pacific oceanic marine debris for a number of years, I knew this was going to be a hot topic. We were taken aback by the intensity of the media and public interest in our 2009 cruise to study plastic in the North Pacific Subtropical Gyre, and interest has remained steady over the past few years. So once the paper was in press, about 2-3 weeks before online publication,  I gave a copy of the paper to Scripps public information officer Mario Aguilera. I’ve worked with Mario for several years now – he even came to sea with us! (that’s him on the BBC website deploying the manta net with me) – and I knew he was very familiar with the work. Mario completed the press release about a week before the paper came out, which gave me, my co-authors, and my advisor plenty of time to review it. Preparing for press coverage carefully ahead of time also gave us time to ask Anthony Smith for permission to use his wonderful sea skater photo, which you can see on the Scripps website. The paper was embargoed until Wednesday, May 9th, but media had access to it for a week beforehand. I started getting calls and emails on the Monday before it was released, which built to quite a number of inquiries by Wednesday.

My personal media policy is this: my work was paid for by United States taxpayers, California taxpayers, and private donors, and so I’ll talk to anyone who asks me polite and coherent questions, if my schedule allows. This means that I’ve done 28 interviews since last Monday – and they’re still trickling in. All these interviews probably did cost me a couple days of work – but I spent 2.5 years and a lot of money on the science on this paper! A couple of days talking to the media to tell the public what they paid for is more than fair recompense.

Our preparations and Mario’s hard work in wrangling lots of scheduling made all 28 interviews run reasonably smoothly. Also, my long-time participation in science outreach was a plus – for example, I had used Twitter to ask BBC reporter Jonathan Amos to stop by my poster at the Ocean Sciences Meeting this past February, so he was already familiar with the research before even writing the story. Doing lots of science outreach also meant that I was practiced in explaining this work to a general audience, so I wasn’t doing it for the first time when talking to a journalist. One surprising barrier was my lack of a land line – I don’t have one in my office or home. (I use a Google Voice number for my “office phone.”) I suspect this type of setup is increasingly common among younger scientists (and people in general), so I encourage the journalists out there to get familiar with Skype as a workaround. I did a couple video interviews over Skype and it worked well, though it’s probably not for novice communicators, since talking alone in your office to your laptop camera is quite challenging.

While I was pretty pleased with accuracy of the media coverage as a whole, I did run into some problems that were largely my fault. I should have realized that I needed to more carefully explain the difference between size (“Size of Texas!” which is not accurate) and concentration (100-fold increase in the number & mass of plastic PER unit seawater, which is accurate). When talking about fish eating plastic (a separate study done by Scripps students last year), I should have been more careful to mention that these fish swim up to the surface every night, and therefore may be eating plastic there, not in the depths of the ocean. That’s the stereotypical scientist trip-up – Diel Vertical Migration is an ocean phenomenon engrained in my SOUL, but it is definitely not common knowledge. Problems from the media side of things primarily stemmed from careless readings of the press release – for example, we found that sea skater EGGS were increasing, but couldn’t show statistically that sea skater ADULTS were increasing, which some reporters misunderstood. 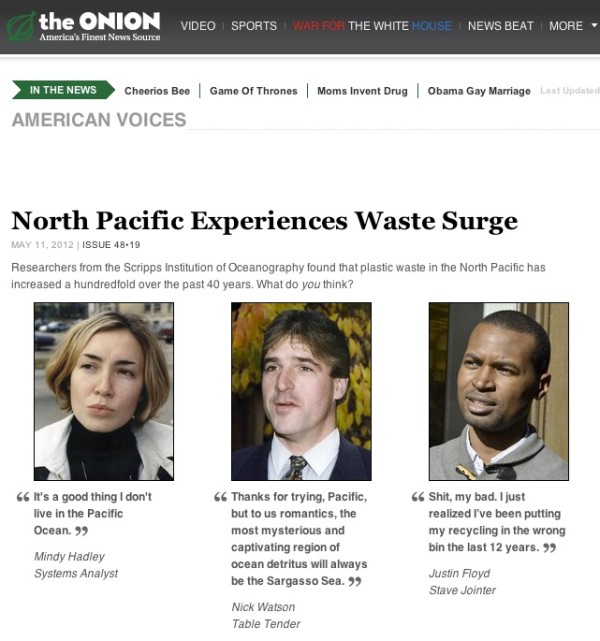 And of course, it was all worth it – because we were featured in the Onion! (“Better than Science or Nature,” according to my Twitter friends…)

I hope that this is helpful to other scientists who may be facing similar media situations. Please feel free to ask questions or share your own experiences in the comments.

[cross-posted at the SEAPLEX blog]

Share the post "Pacific plastic, sea skaters, and the media: behind the scenes of my recent paper"

10 Replies to “Pacific plastic, sea skaters, and the media: behind the scenes of my recent paper”