It’s easier to have a gait when you are bilateral.

At the beginning of the video above you can see that brittle stars move by using only 4 of their five limbs.  A central limb appears to point forward and do much of nothing else. New work with the fantastic title “Getting around when  you’re round” by by a graduate student at Brown University, Henry Astley, provides the first quantitative analysis of this behavior.

Brittle stars pull this synchronized movement, i.e. rowing (A Below), off without a brain.  Yet, in brittle stars the forlimbs are tightly coupled. “The forelimbs appear to function as a rotating strut during rowing, propelling the body disk via the sweeping motions of long limbs.” But even more amazing, as shown by Astley, is that brittle stars have found a mechanism to choose any of its five limbs to direct its movement.  Any of the arms are capable of being the front, i.e. a lazy leg gets to ‘lead’ and apparently gets a free ride (Left).  When the brittle start wants to change direction, it picks a new leg to be the front and starts moving in that direction.  This is unlike how we move.  We first rotate our bodies and then move in the new direction.

Astley also describes another locomotory behavior, reverse rowing (C below). At 0:22 in the video above you can see a brittle star moving by reverse rowing.  In this behavior there is no lead leg, but rather a straggler.  During reverse rowing, the forelimbs both rotate and pull the body disk forward by shortening via a series of bends. 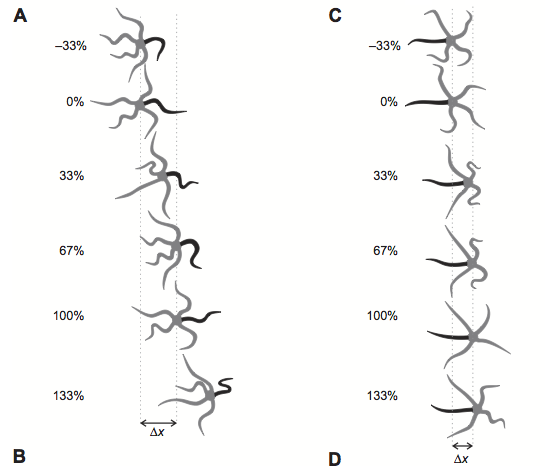 Why do brittle stars row? Astley suggest that the preference for symmetrical arm propulsion may be due to mechanical benefits. The body rests on the seafloor and thus continued support of limbs, like in us, is not needed. Thus synchronous movements of the arms can be free to work in unison and generate symmetrical forces and displacement. Interestingly this also in other animals that scrap their tummies on the ground–sea turtles and mudskippers.

I guess there is only one thing to do now.  Listen to some Nancy Sinatra.

2 Replies to “These Arms Were Made For Walking”