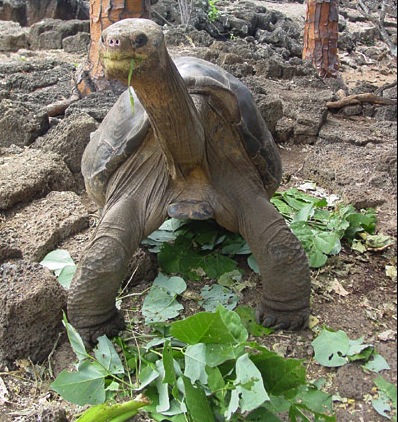 I just read that Lonesome George, the presumed sole-remaining member of the Pinta Island giant tortoise species of the Galápagos, has died.  Lonesome George was more than just bearer of his evolutionary legacy.  He was an icon for the delicate precipice that all Galápagos species (and other threatened species globally) teeter upon.  Sadly, unless other Pinta individuals are somehow uncovered in the Galápagos or scattered around the world in zoos or other collections, Chelonoidis nigra abingdoni is gone forever.  Having visited the Galápagos Islands numerous times, I’m only too familiar with the raw hand dealt to these magnificent giants.

As early as 1789, whalers reached Galápagos shores having traveled halfway around the world to harvest its bounty.  And when they came ashore in search of freshwater, they slaughtered hundreds of thousands of giant Galápagos tortoises (Geochelone spp.) for food.  Decades of human visitors brought invasive species–goats and pigs–to these isolated islands, depleting native island vegetation which was food for grazing tortoises.  Rats, mice, and cats, who joined the ranks of Galápagos immigrants over the years, raided tortoise nests and wiped-out generations of new tortoise progeny.  Even scientists did their share in the depletion of giant tortoises.  In 1905 and 1906, for example, an expedition from the California Academy of Sciences cut a broad swath through the Galápagos, collecting a mind-boggling quantity of species, including 266 tortoises.

IN July of 2002, I visited the Galápagos and met Lonesome George for the first time.  It was my first trip to the islands and, being a good student of Darwin, I resolved to record as much as I could about my experiences in my field journal.  In memory and honor of Lonesome George’s passing, I thought I’d transcribe (unedited) a relevant passage from that first meeting:

Puerto Ayora was packed with tourista boats.  Everywhere, a strong diesel smell permeates the air.  We boarded the panga and tooled along through red and black mangrove forests to the Darwin Research Station.  At the dock, several marine iguanas basked obliviously.  Some very young ones acting skittish.  Past a mangrove arch and into the compound and visitor center to watch two videos on the Friends of the Galapagos program.

Following the videos and shakedown for donations, we headed to check-out the giant tortoises.  Along the way, Opuntia trees towered next to candelabra cactus.  Lot’s of bizarre xerophytes I didn’t know.  In pens and behind bars, we finally saw baby tortoises (yearlings).  After more cages, we crossed a boardwalk to spot Lonesome George, the last Pinta tortoise.  George was apparently asleep on the edge of a set of steps.  His domed carapace was dusty and dry, and the rear third of his body hanged out over the edge of the steps.  His rear left leg dangled in mid air.  I was only able to see his back side as he faced away from me.  I’m looking at the last of a species!  I wonder… did anyone think the same when spotting the very last Steller’s Sea Cow?  The last Thylacine?  Last Dodo?

I’m humbled, squatting in front of these metal bars, gazing at this ancient reptile.  It’s almost fitting that he’s turned his back to me.

A short walk takes me past some closer views of other monumental tortoises.  What hippo-like/elephant-like feet they have.  Just pedestals.  Throughout the tortoise paddock, big mounds of giant tortoise shit litter the ground.  At the end of the enclosure, a really enormous tortoise with a nearly 1.5 meter long carapace was resting in the shade.  While I watched, another visitor used a camera with a flash which startled the tortoise.  The giant expelled air out of it’s mouth in a hoarse, “Hhhchaaaa, Hhhchaaa, Haaaaaa…”  Amazing!

Though incredible to see all this, there was the quality of a zoo visit to these encounters.  I saw these Galapagos wonders in the flesh, but the setting was contrived and removed.  Out of place.  Like religious art, intended to be displayed in a church, instead hung in a museum.  It’s out of context.  I wish I had found these amazing animals while wandering a trail in the park… Just a slice of their daily lives.  Fat chance, I’m afraid.

It’s tempting to write far-reaching metaphors on news of Lonesome George’s demise.  Especially since this obituary was an inevitability considering the science of minimum viable populations and the lack of other Pinta tortoises cropping up over the years.  I could also wax cynical and suggest that news of Rio +20 failure reached George’s ears and it was more than he could bear.  I’ll spare you my dot-connecting.  Besides, I’m sincerely saddened by this news.  We have a rare moment in time to globally recognize the loss of yet another charismatic species at the hands of human incursion.  Not that the less charismatic losses are any less important, but Lonesome George was more than just an icon.  He was a brand.  His image graced the Galápagos National Park Logo.  And as a long-lived species, his passing has even more impact considering the long watch George kept on the planet.  George was more than likely over 100 years old, and perhaps a good deal older than that.  We humans like to make a fuss about individuals of our own species attaining “old age.”  I’m not saying we celebrate our elders.  On the contrary, at least here in the US we tend to marginalize our seniors.  But we nonetheless like to herald milestones of age and marvel at significant passings.

Well, Lonesome George’s age and death is a milestone as well.  His passing marks another notch on the scorecard for loss of global biodiversity.  In the existential sense, people in Peoria, Minsk, or Jakarta will go about their lives today oblivious of George’s departure.  But this is yet another species that has not shuffled off due to natural causes, but as a result of our handiwork.  And if what we understand about biodiversity is true, that rich and complex biodiversity boosts ecosystem productivity, then each species, no matter how small or isolated, all have an important role to play.

So Long, George.  The world was a better place with you.

One Reply to “Encomium: Lonesome George”