Picture this: Cape Cod, June 20, 1975.  Gerald Ford is President, gas is .53 cents a gallon, and a carefree, 11 year-old–yet already ocean-nerd, future coral conservationist/blogger–is spending the summer with family in the vacation town of Orleans, Massachusetts, right on Nauset Beach.

This is the summer he’s been waiting for… the summer of the cinematic release of Jaws.  Together with his brother and cousins, he begs the adults to take them to the opening night.  No dice, but cousin Monica is 19 and has a drivers license!  They all load into the enormous station wagon (with genuine 1970’s wood panels) and wait in line for at least an hour with other summer tourists for this gala event.

Finally seated (with many boxes of buttery popcorn) the lights dim, the low basso strings start-in with the now famous Da dum, Da dum, Da dum, Da dum.  Cheers erupt!  Could it possibly get any better than watching a shark terrorize a New England resort town while staying in a New England resort town?  The young boy is ecstatically happy.  That is until Ben Gardner’s severed head pops out of the hole in the hull of his scuttled boat!  The boy doesn’t sleep well nor swim in the ocean for the rest of the summer.  But oh, what a summer nonetheless.

The reason I’m walking you down my memory lane is that today I’m celebrated the 37th anniversary of the summer release of the film Jaws. (In fact, fans of the film are flocking back to Cape Cod as you read this to join in the festivities!)  And part of my celebration is that I dust off my childhood ocean scrapbook filled with news and magazine clippings, photos, and other paper odds and ends that I collected as a child to feed my early ocean obsession.  The scrapbook has held up well over 43+ years though it has that old library smell to it.  And one of my prize possessions is the original June 23, 1975 issue of Time magazine with a cover story on Jaws.  I still remember finding the cherished issue in the morning pile of mail and immediately spiriting it away to my room before anyone else could see it.

While my professional ocean science curiosity over the years would see me pursuing interests in seaweeds, evolution, and tropical ecology, it was sharks that initially got me hooked.  And the summer of Jaws was just fuel for the fire.  I’ve lost count of how many times I’ve seen Jaws since that summer of 1975.  But I remember thinking, even as an 11 year old, when I became a marine biologist I hoped to be as cool as Richard Dreyfuss’ Hooper: “The left arm, head, shoulders, sternum and portions of the rib cage are intact…  Do not smoke in here, thank you very much.”

As an added bonus to celebrating this gem of an issue, I get a quick reality check on how much has changed in 37 years.  Aside from the full page cigarette ads on practically every other page, other notable ads popped out.  First of all, were cars really this cheap?

And then there’s the 1975 version of word processing. 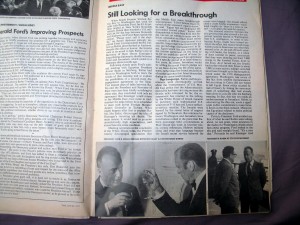