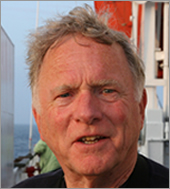 Don Walsh one of two men to first visit the deepest point of the world’s ocean and one of only three to succeed at this responded quickly.

“I found myself there for all the wrong reasons.”

Don Walsh probably always possessed the explorer gene.  But it was genes plus environment that produced Walsh.  Walsh grew up in the large port of San Francisco Bay inundated with the salty air, large ships, small boats, dark waters, a busy port, and the momentous Fleet Week. These potentially hinted that something beyond San Francisco existed, something more to explore, and the commonness of people traveling to new places. “It seemed natural that I join the Navy.”

Oddly Walsh’s Naval career started off on a torpedo bomber facing backward. “I really wanted to be in the pilot seat facing forward.”  The best way toward this was obtaining a college degree and particularly through the Naval Academy.  When I asked how he succeeded in gaining entrance into the prestigious Naval Academy, Walsh replied “Luck.”  Upon completion, all graduates of the academy are required to serve as watch officers aboard a surface ship for two years.  After serving aboard both the USS Wisconsin and the Albany, Walsh had hoped to specialize in aviation and return to the cockpit.  However, poor eye sight prevented this path. Thus began a career as a submariner.

Jacque Cousteau once said to his son Jean-Michel that his life was “a lot of little things that came together just right.”  Cousteau’s and Walsh’s life both exemplify the opportunity of the unplanned and the ability and drive to pursue and recognize it. Our paths in life are often not a strait trajectory from here and now at point A to the future point B, even if we know exactly what we B to be.  Kevin’s personal story and others as part of the I Am Science project are beautiful reminders of the tangled path we wander and the series of unexpected events we encounter. As an undergraduate I was deeply disappointed when a professor did not choose me to dive in St. Croix conducting reef fish counts.  Another professor, my alternate choice, did invite me to work in their research group.  That professor eventually became my Ph.D. advisor and instilled passion and knowledge in me for the deep sea, which led to an eventual submersible dive of my own, a marine blog, and recently a discussion and car ride with the legend and man who is Captain Don Walsh.