Sea Level Rise Is Tied to Prevalence of Homosexuality

Although only two years old and previously unrecognized by the scientific establishment, Global Draining (GD) has now become a widely accepted theory. GD states that sea level is falling not rising (Southern Fried Science, 2010a).  Current rates of GD indicate the entire world’s ocean will be empty by 2026 (Southern Fried Science, 2010a).  Local-scale observation of in situ draining combined with a robust theoretical model firmly place the rate of draining at 40 Gigatons of water per year (Dr. M, 2010).  It has been argued that both one and multiple holes occur in the ocean floor that allow for GD (i.e. the monoclavis versus polyclavis hypotheses via McCay, 2010; Southern Fried Science, 2010b). However, the impacts and causes of GD are not clearly understood.  Despite this, GD is a fundamental tenet of nearly every facet of science and likely correlated with many aspects of biology, economics, sociology, religion, and politics.  For example, GD is likely to lead to massive die offs of sharks and reduce global atmospheric oxygen levels (Shark Diver, 2010).

The GD phenomenon appears to be most severe in the western North Atlantic Ocean with an epicenter somewhere near coastal North Carolina, U.S.A.  Recently it was proposed that the density of homosexuals (i.e. homer-sexuewlls) is directly correlated with sea level height (NC State Legislature 2012).  The hypothesis suggests that increased homosexuals in a locality incur a deity’s wrath, most probably by flooding (Leviticus 18&20 and Genesis 6-9).  Recent legislation in North Carolina banning same-sex marriages (NC State, 2012), driving many homosexuals from the state, leads to an excellent opportunity to test this idea.

One thousand by ten meter transects were conducted at 531 randomly selected localities throughout North Carolina.  Along transects, each person encountered was asked the question “Are you gay?” and answers were noted.  If answerees responded “No”, the follow up question was asked “Are you sure?” to confirm.  This yielded densities of homosexuals per meter.  Transects were collected annually from 2005-2012.

Post conducting transects, sea level in meters off North Carolina was measured with a ruler and by eye. 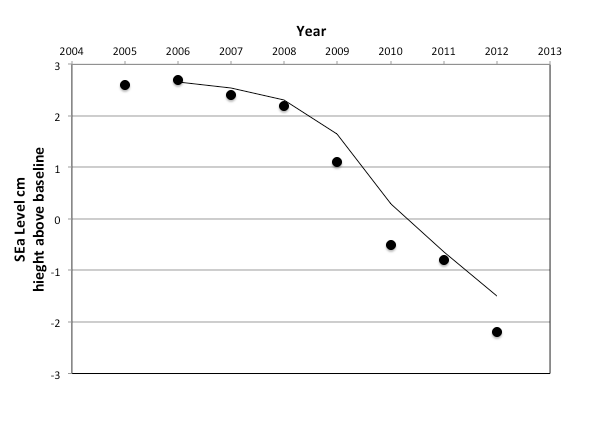 I found that sea level height has been precipitously declining since 2009 (Fig.1) indicating GD is a recent phenomenon.  The rapid sea level loss in 2010 was noted prior (Southern Fried Science, 2010a) and matches theoretical predictions (Dr. M, 2010).  Sea level decline reached its greatest levels in 2012. 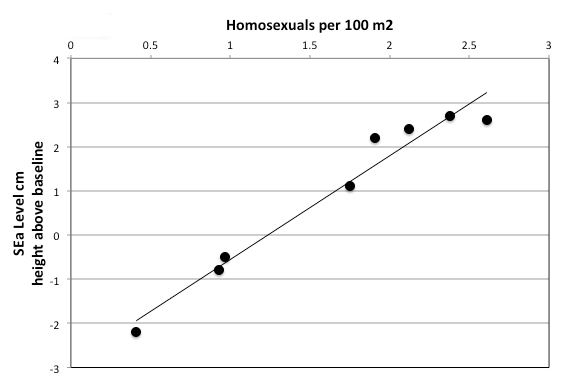 Here I find a strong positive correlation between the density of homosexuals and sea level (Fig. 2).  A recent dramatic decrease in sea level was seen in 2012 and likely reflects anti-homosexual/pro-heterosexual legislation (NC State, 2012).   As God’s preferred wrath for eliminating wickedness is flooding and homosexuality is likely to be wicked (Leviticus 18&20 and Genesis 6-9), this suggest a homosexual GD link.

As this study only provides correlational evidence and not causation, I urge for future work exploring the link between homosexual population density and GD.  One possible insightful research line would involve a sociological case study of God. This would incorporate a survey with questions such as “Do you hate homosexuals?” and “Is flooding your preferred option for wrath?” 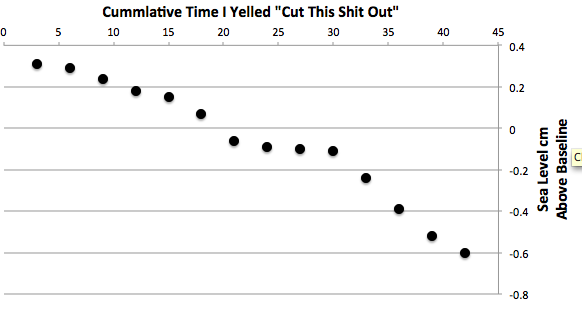 However, I do note a reduction in density of homosexuals is not enough to account for the trend of GD.  Recent work has suggested that direct telling the ocean not to increase sea level may halt sea level rise (Southern Fried Science, 2012; Huler 2012; NC State 2012).  To test this, I went to the North Carolina Shore and yelled at the ocean “Who do you think you are? Cut this shit out!” three times a day for two weeks.  Interesting, I found not only a stop of sea level rise but by day eight a significant reduction (Fig. 3).  This suggests that overuse of the direct telling method may actually have negative consequences.

Here, I find that the reduction of the homosexual population and direct telling the ocean to “cut this shit out” have lead to the Global Draining phenomenon in a regional setting.  Future work will need to focus on establishing causality and if trends hold globally.  I also urge the exploration of other hypotheses, e.g. Forget About It (Brasco 2006), Bearded Men (Leviticus 19:27), the Priest’s Daughter is a Whore (Leviticus 21:19).

This work was funded by generous support from NC-20, North Carolina Values Commission, Pastor Charles Worley and members of the Providence Road Baptist Church, and this lady who gave me $10.