It’s no secret that we here at Deep Sea News are huge nerds. I can hear the outraged cries through my computer screen – “No, not the Deeplings!” – but guys, IT’S TRUE.  What you probably don’t know is that Dr. M and I are HUGE Firefly fans. (For those of you who don’t know, Firefly was a TV show, canceled after less than one season, which was basically a space western created by nerd-idol Joss Whedon. Dr. M and I are somewhat less of a fan of this Firefly, but, um, we are still thoroughly acquainted with it.)

But what we’ve both learned through our marine biological travels is that rabid Firefly fandom is common throughout the ocean science world! I once spent an entire month-long cruise trading juicy Firefly quotes with the chief engineer, and had a second mate tell me “Oh, I thought you were just wearing some dorky science t-shirt, but when you took off your PFD I saw that it’s a Firefly shirt!”

And so, Dr. M and I have conspired to send me to San Diego Comic Con as the first ever (to our knowledge) Official Ocean Science Correspondent. For one day of Comic Con, I’ll be reporting on the latest intersections between ocean science and science fiction. In honor of this, and of Firefly’s 10th anniversary, Dr. M and I have put together this list.

10. Quarters are tight, but your berth is your castle. This is where you can relax, surrounded by comforting objects, whether they are trashy novels, music, guns, or that purty purty dress. Yes, one of us may take a dress to sea with them, and it’s not Miriam. Frankly, Serenity‘s cabins are nicer than most research vessels we’ve been on – private and with their own toilets! Pretty appealing after sharing a cabin so tight that you and your roommate can’t stand up at the same time. Also, sharing a very very small room means that you best be careful when it’s time to “be in your bunk.” (H/t  Angela Quarles for the screenshots.)

9. Meal time is social time, and the galley is a gathering place. That is unless you prevent someone else from getting their meal.  On both a ocean- and space ship, space is at a premium, and there’s no room for multiple social spaces. And after working hard and bickering in close quarters for days on end, relaxing over food is a way to reconnect with your shipmates, even when the food is not that great. Everyone runs out of “freshies” after a while and has to resort to processed and preserved food.

Click for video (sorry, for some reason this & some of the other videos will not embed).

8. Safety is vital. Ok, it seems to be a little less vital on Serenity  than on most research vessels, but it’s still vital. It’s a big and lonely ocean and galaxy, and there’s often nobody to help.

7. Recreation is really important when you’re all stuck with each other for weeks and months. People get creative about using existing space for fun. Most ships we’ve been on have had game tournaments, haiku contests, and tons of movie options.  When in Antarctica aboard a German icebreaker, Dr. M competed in a croquet, water basketball, and improvised winter Olympics.  Till this day the certificate for winning the water basketball tournament hangs in his office.

6. Staying in shape is hard, but important. It’s hard to realize that on a ship, there’s no place to walk or run. A lot of people get really into lifting weights – which frankly is more appealing on a spaceship than on a rocking ocean ship. Although lifting weights in heavy seas is great workout to build core strength.  Of course, so is holding yourself in your bunk during heavy seas…or puking during heavy seas. (Miriam, a sea sickness professional, is currently trying to break her personal distance record.) 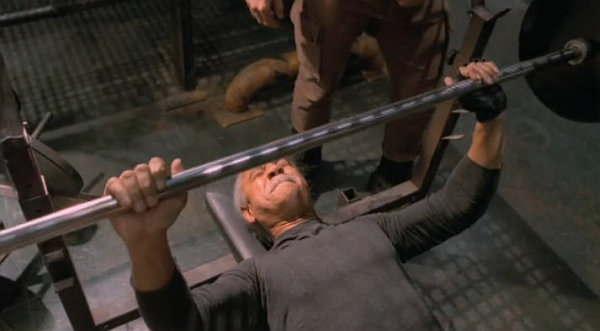 5.  The bridge is the beating heart of the ship. This is where planning and decision-making occur, and this is where the captain needs to be whenever something unexpected is going down.

4. Tensions can run high. You’re stuck with these people for so long that every tiny habit can become unbearable irritating. If you’ve already got a tense relationship with someone…well….getting stuck on a ship can make it worse.

3. Everyone knows your business. Don’t expect privacy or quiet – and your personal scandals are going to affect everyone’s morale.  And don’t expect those especially risque scandals not to be known either – although at least this will raise two people’s, um….”morales.”


2. You can develop close and unexpected friendships. Sometimes these friendships can seem a bit…odd…to outsiders.


1. And of course, port call is vital. Port is where you hear from your family – and whether you travel the sea or space, when in port, you aim to misbehave.