Our colleague John Hocevar is out in the Bering Sea right now studying the seafloor communities there with Greenpeace and the Waitt Institute. John has shared new finds with us before and was kind enough to share a really cool new discovery with DSN readers! Enjoy!

We are using the Waitt Institute’s Dual DeepWorker submarine to explore the largest underwater canyons in the world, on the Bering Sea shelf break. We’re building on research we began here several years ago, to inform a review of the science and management of the canyons that we expect will lead to new protections for these areas.

As with any deep sea exploration, much of what we are finding is surprising. So far, the most unexpected discovery was a large skate nursery in Zhemchug Canyon, with thousands of egg cases and numerous adult skates. I have been following off and on the discussions at the North Pacific Fishery Management Council about protecting several known skate nurseries, but until seeing one first hand I had little idea what they really looked like!

It was a great dive right from the start. We were on a pinnacle on the western edge of Zhemchug Canyon, and dropped in at 250 meters to find ourselves on a steep wall covered in sponges, corals, and other invertebrates. Just when the slope started to level off, we started seeing the skate eggs. THOUSANDS of skate eggs, piled on top of each other in heaps, as far as we could see (which, to be fair, wasn’t all that far). It looks like they are from either the Bering skate or the Alaska skate – or (so scandalous!) maybe both.

How the hell do all these skates know to come here and lay their eggs year after year? Why here? What would be the impact on the population if a trawler ran through this nursery, w/ skate eggs often taking over three years to hatch? 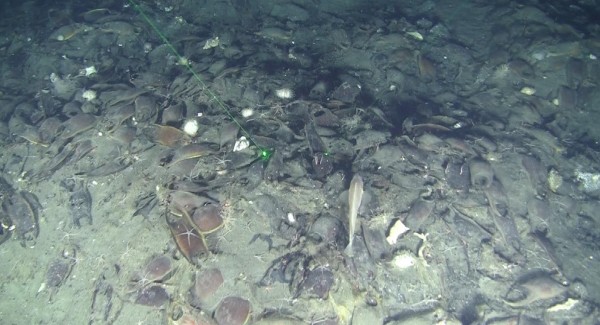 Check out the expedition website for more images and updates. We’ll be diving in Pribilof Canyon next, and then we’re headed up to the Chukchi Sea.

In a paper published in PLoS One, we reported observing fifteen species of deep sea coral, at a density greater than most other known locations in the world. We also confirmed that the corals were being used as habitat by fish, and documented impacts from trawl and longline fisheries. As NOAA has reported in their last three reports to Congress, the vulnerable coral and sponge habitats of these canyons lack protections from bottom-tending fishing gear.