Another oil spill study hot off the presses! This new Silliman et al. PNAS paper is looking at the effects of the 2010 Deepwater Horizon oil spill on heavily-impacted salt marsh ecosystems around Barataria Bay, Louisiana. In contrast to our own badass study looking at oil impacts on sandy Gulf Coast beaches, marshlands provide a particularly interesting contrast because:

Past studies investigating effects of oil spills on salt marshes indicate that negative impacts on plants can be overcome by vegetation regrowth into disturbed areas once the oil has been degraded (8, 28–30). This finding suggests that marshes are intrinsically resilient to (i.e., able to recover from) oil-induced perturbation, especially in warmer climates such as the Gulf of Mexico, where oil degradation and plant growth rates may be high. (Silliman et al. 2012) 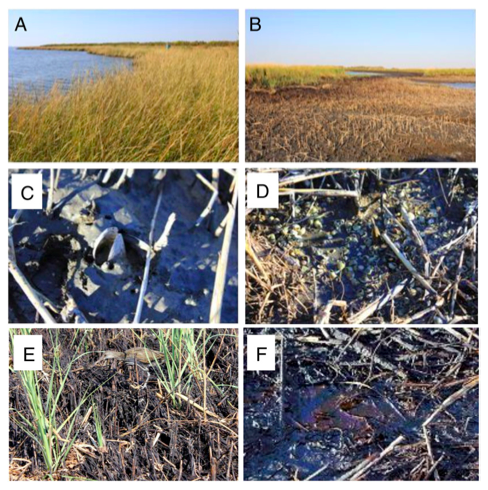 The finding’s aren’t surprising. Oil killed stuff. But even after 2 years, there’s been more speculation than published research and I think its important to highlight ongoing efforts to characterize the exact ways in which oil wreaked havoc on the Gulf ecosystem.

These data provide evidence of salt-marsh community die-off in the near-shore portion of the Louisiana shoreline after the BP-DWH oil spill because of high concentrations of oil at the edge of the marsh. Specifically, these findings suggest that the veg- etation at the marsh edge, by reaching above the highest high- tide line in the microtidal environment of the Gulf of Mexico, blocked and confined incoming oil to the shoreline region of the marsh. This shoreline containment of the oil may have protected inland marsh but led to extensive mortality of marsh plants lo- cated from the marsh edge to 5–10 m inland and to sublethal plant impacts on plants 10–20 m from the shoreline, where plant oiling was less severe….These data also suggest that the mechanism of the lethal effects of oil are more likely derived from interference with respiration and photosynthesis than from direct toxicity because plant death only occurred at high levels of oil coverage. (Silliman et al. 2012) 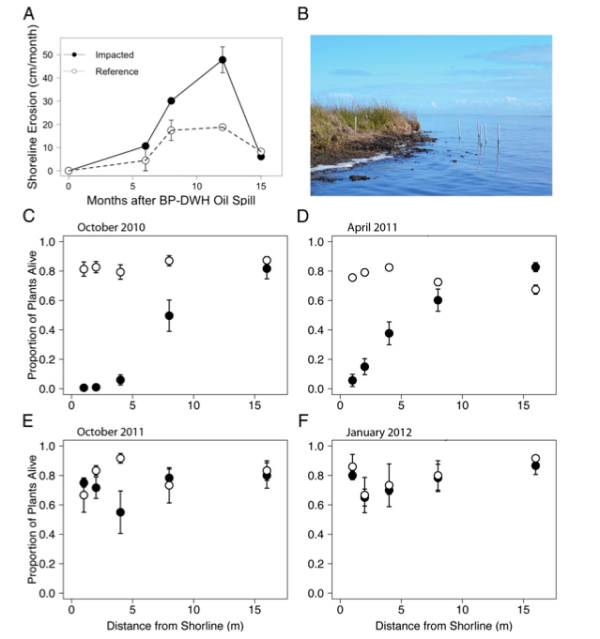 Silliman et al. found that this oil-induced plan death effectively speed up the rate of erosion in Louisiana marsh ecosystems. Oiled sites eroded twice as fast as reference (non-oiled) sites, for a full year (October 2010-October 2011) before leveling back off again.

Our results suggest that there are reasons for both optimism and concern about the impact of this oil spill on Mississippi deltaic marshes of Louisiana. On one hand, our results reveal that marsh vegetation displays remarkable resilience to oil spills by concentrating and confining the effects of oil to the marsh edge, recovering fully in noneroded areas after ∼1.5 y, and suppressing, through this recolonization, further accelerated erosion rates along the shoreline. The lack of oil on the marsh surface or on grasses at distances greater than 15 m from the shoreline at any site (Fig. 1A) suggests that incoming oil sheens were contained and prevented from moving into interior marshes by a baffling wall of live and dying salt-marsh grasses, a process that in itself increases the resistance of the extensive marsh ecosystem to oil spill. However, this resistance comes at a high cost for the impacted areas because marsh grass die-off and subsequent sediment exposure to waves resulted in a more than doubling of the rate of erosion of the intertidal platform, leading to permanent marsh ecosystem loss. (Silliman et al. 2012)

Louisiana’s salt marshes play a critical ecological roles, acting as storm buffers and breeding grounds that underpin the entire Gulf seafood industry. But they have been in trouble for a looooong time. The BP oil spill added extra stress to these already-stressed ecosystems–yet another anthropogenic impact promoting further ecosystem decline.