Science is about discovery, observation and understanding, but it doesn’t always proceed smoothly and inexorably towards success.  Real science, especially RealBiology®, is often messy and complicated, and the real challenge of being a biologist is distilling out of that sloppy chaos some meaningful patterns that might advance the field.  I am with a team from Georgia Aquarium in Yucatan Mexico right now and we are having just one of “those” trips.  I’m sure you know what I mean: it’s like you get out of the wrong side of the bed or something.  I was hoping to present to you a stunning field notes post full of pictures of exciting new discoveries.  Instead, we have been diving for days and have seen precisely NONE of what we were looking for.  I’m not even going to explain what that was – I’m going to save it for the day we DO see what we’ve been seeking.  It’s going to be awesome.  No, really…

Anyhoo…  As they always say, a bad day on the water is always better than a good day in the office, so in that vein, I present instead a pot pourri of pictures of the stuff we HAVE seen while we’ve been here.  By way of preface, this is a fascinating area: a rare example of tropical upwelling on the west side of an ocean basin.  The prevailing currents come up along the coast from Belize to the south and race through the Yucatan channel between Mexico and Cuba.  As they curl to the west around Cabo Catoche and into the Gulf of Mexico, they bring up deeper, nutrient rich water onto the narrow shelf, which sponsors a rich – sometimes staggeringly – pelagic community.  Other complexities of the local geography, especially the islands of Isla Mujeres and Isla Contoy create a mosaic of diverse other communities including coral reefs, rocky reefs, sea grass meadows and sargassum communities.  It really is a pretty cool place, biologically speaking. 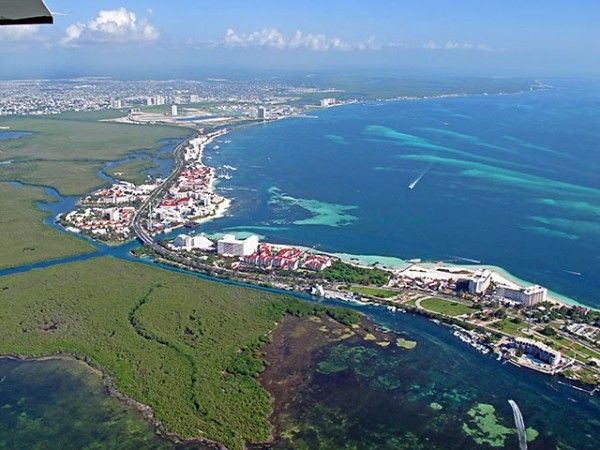 Punta Nichupte and Cancun centro beyond

We got up for an aerial survey early in the trip.  This shot looks from the hotel zone to the northwest and includes at the bottom the (troubled) lagoon next to the hotel zone.

On that flight we visited some offshore submerged platforms we were interested in diving on.  From the air you could easily see the current and swell combining to create eddies.  We were able to find these the next day by boat, which was really cool. 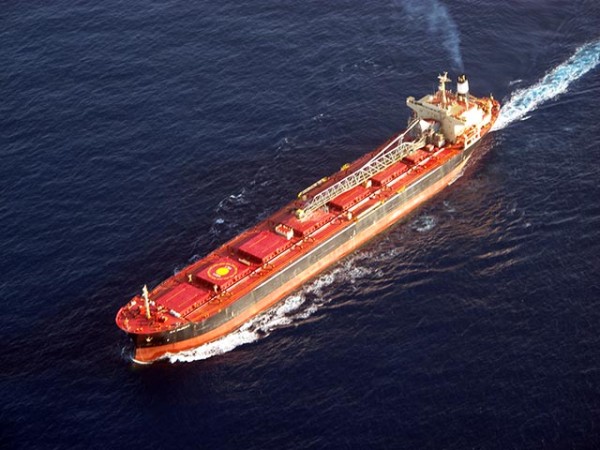 Commercial ship in the Yucatan channel

We also saw the obligatory commercial shipping pressure.  I include this because of the risk that these ships pose to the offshore or afuera whale shark aggregation that I have written about at DSN before.  These ships ply the same waters as the whale sharks and, were one of them to hit the aggregation, the impact could be disastrous. 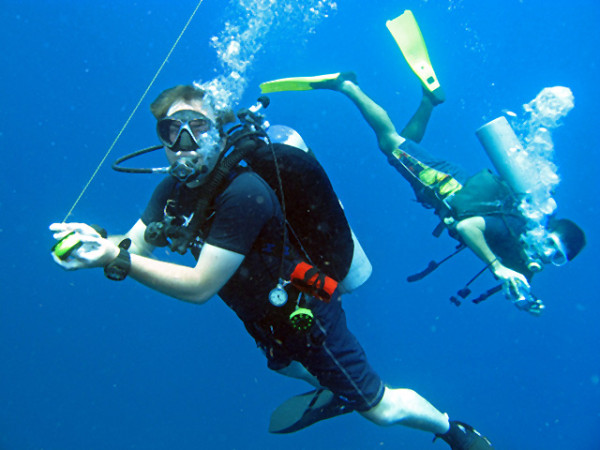 So next day we headed out in search of, oh wait, I’m keeping that secret.  Anyway, *whatever* it is, it involves blue water diving, which is a real kick, if you’ve never done it.  Here’s the aquarium’s ADSO Ron Barbieri with our Mexican colleague Eugenio de la Parra.  The descent into the blue without any reference points on the bottom is both disorienting and liberating.  There’s some safety considerations (Rons line connects to a floating “safety sausage” so that topside folks know where we are by more than our bubbles) and the ever present “What’s out there?” in the back of your mind, but soon enough you get used to it and just enjoy drifting weightless in the blue. 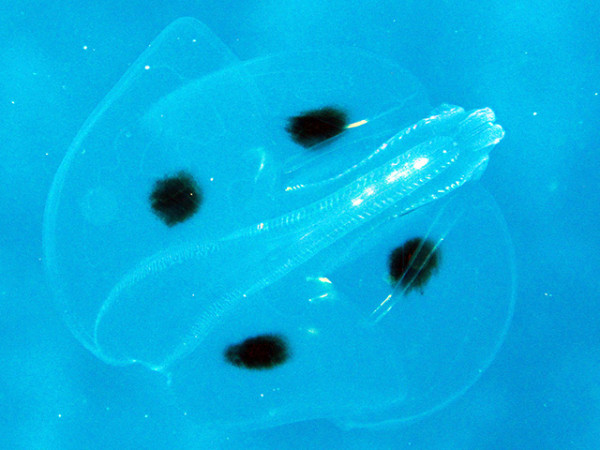 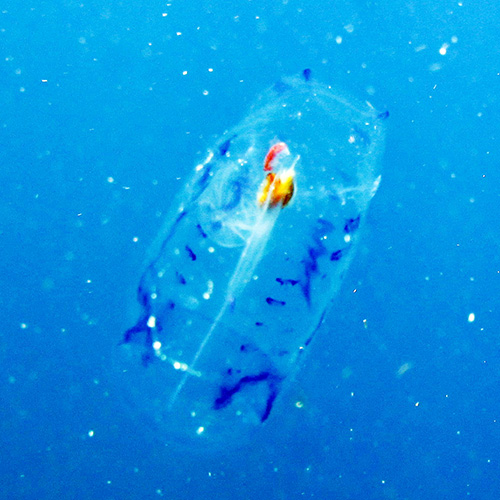 While you’re floating along, you do see some cool plankton from time to time.  I’ve included two here.  The top one is a spot winged comb jelly, an  elegant species you often see here.  I always wonder what’s the point in being translucent if you have giant black spots that give you away?  The bottom one is a salp, a type of urochordate, not that distantly related from ourselves, believe it or not; urochordates are the sister group to the vertebrates.  This little (1 inch) guy was very persistent at trying to get into my lens, so I have lots of blurry shots; this was the only decent one. 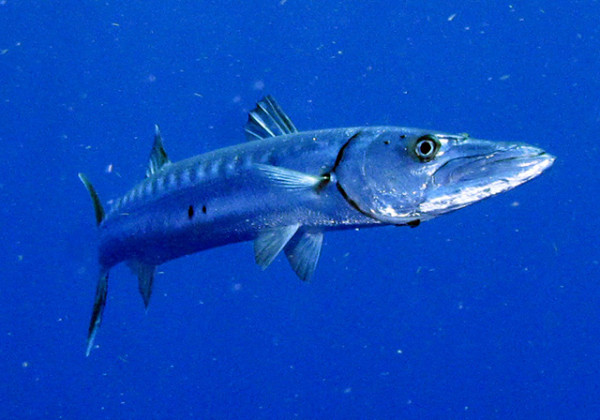 Sometimes when you’re diving blue water, you turn around and find out you have a follower…

You have to go down and see the bottom if you can, and here’s what it looks like at 120ft below the Barracuda.  It turns out to be a Halimeda bank.  Halimeda is an interesting green algae that is unusual in that it incorporates limestone into its tissues.  Consequently, it can make up whole banks or reefs, as in this case. 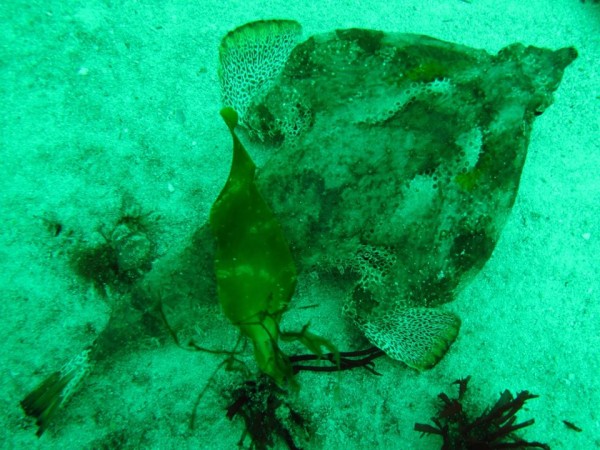 There’s life down there too, like this batfish, walking along on its “elbows” 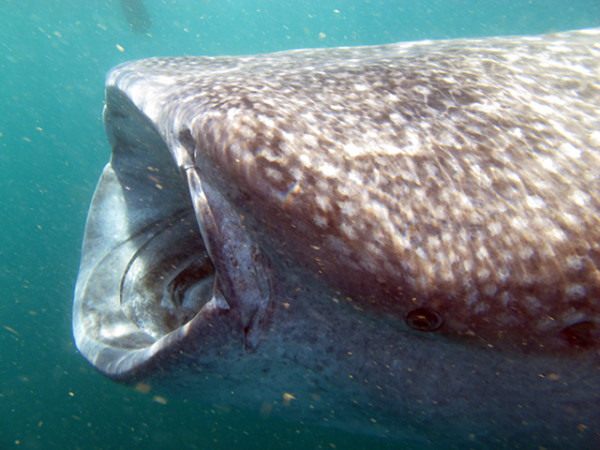 Our overarching research concerns the biology of whale sharks in this area, so I had to include one, didn’t I? 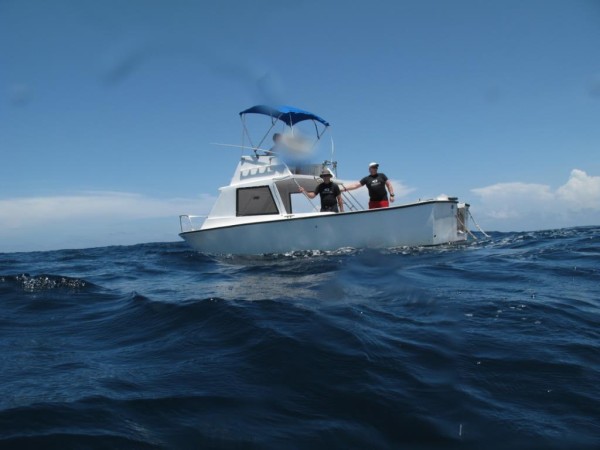 That would be me on the right. Photo: R. de la Parra 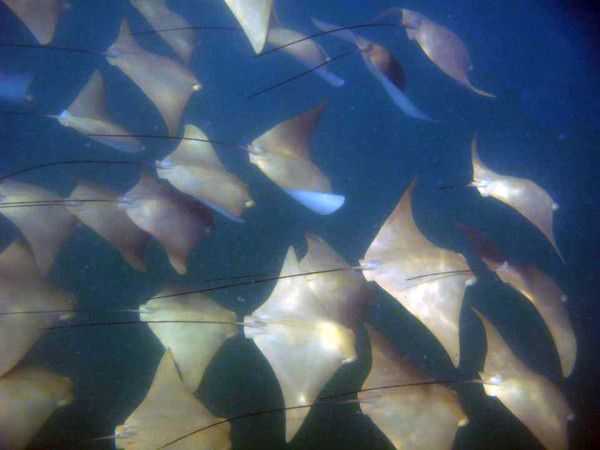 Our colleague Rafa took this great shot of cownose rays just north of Isla Contoy.  There are tons of these around, winging along in graceful schools and darting into the depths whenever they are startled.  There are other myliobatid rays here too: Mobulas and especially Mantas.

Last up, two videos: crevalle jacks at 65 ft east of Isla Mujeres, and for the dolphin huggers, some Tursiops (bottlenose) we saw north of Isla Contoy.

Looking back over the last week, I have to say that it’s been the nicest possible way to get skunked!  We’ve seen some amazing stuff and every little observation goes into that nebulous mental bank of observations that one day come back out as part of a scientific hypothesis.  One day I will post you wonderful pictures of a cool discovery based on one of these that I’ve been cogitating, but, to quote Aragorn, “It is not this day!”

3 Replies to “Notes from the field: Mexico whale shark research 2012”