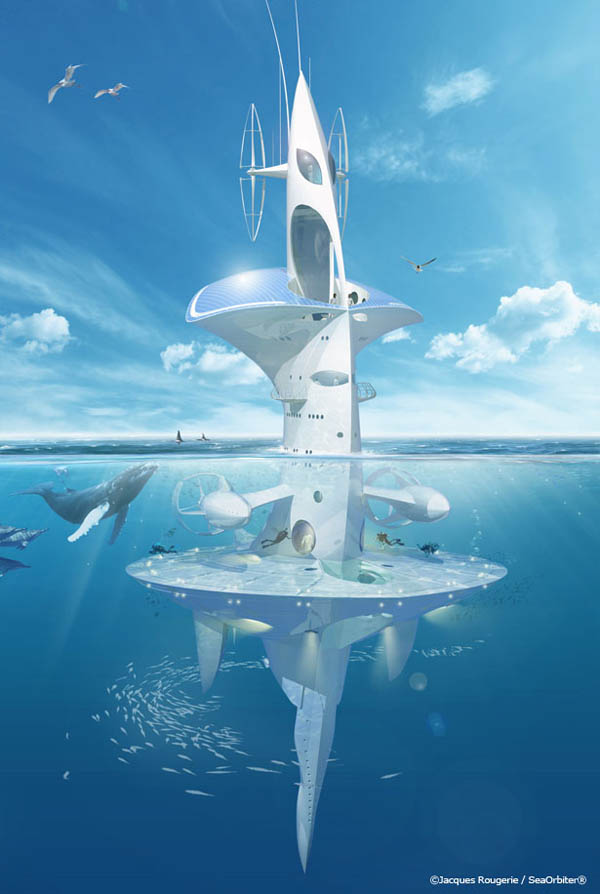 I swear, I don’t want to be a nay-saying science crankypants. I want to dream big and have my own submarine and frolic on the Deep Sea News private island hideout. I don’t want to be the lab-coated finger-shaking wench that crushes new ideas before they are even born. But sometimes a girl just needs to be skeptical, you know? Especially when that girl has spent a fair amount of time doing science on the open sea, and the idea that is giving her a serious case of the crankypants is pretty much the coolest looking vessel EVER.

Behold, the SeaOrbiter. Twelve years in the making, it’s set to begin construction this year to the tune of $52.7 million dollars. Engadget has a nice summary (h/t J.P.):

Remember that USS Enterprise-esque ocean research vessel we first ran across back in 2005? Yes, the one that was originally slated to hit the open waters in 2008 or 2009. After catching heat for its lofty ambitions for the last 12 years, the SeaOrbiter is finally set to begin construction later this year. The ship is slated to measure 170 feet (51 meters) tall, but to stabilize the vessel over half of the vehicle would stay below the surface, providing all sorts of collection systems and useful tools. Not only does it look like something out of Minority Report, but the SeaOrbiter is 100% sustainable. The ship’s power is set to come from solar, wind and wave power with biofuel in case nature doesn’t cooperate — when the vessel isn’t adrift via ocean currents. Funding has been obtained for the $52.7 million undertaking, which will produce an endless amount of data on global warming and marine biology around the globe.

I especially like the friendly humpback whale checking out SeaOrbiter in the rendering. Nice touch. There’s lots more lovely and fantastical renderings here.

Now, according to the SeaOrbiter’s rather hard to read website, the 93 foot (31 meter) section of SeaOrbiter that is underwater is meant for observation of sea life. They say:

Although there currently exists a wide spectrum of traditional ocean research capabilities including research vessels, automatic buoys, satellites and private expeditions, Seaorbiter will not replace them but will work to extend and enhance these capabilties by providing a manned observation platform capable of missions lasting several months.

Specifically, this can be accomplished by Seaorbiter compared to conventional research vessels by its unique parameters related to its operational concept and design:

Awesome! I totally want to live underwater in the open sea! Sign me up please! Except there’s one critical problem. There’s no way to deploy or retrieve equipment. The tools of ocean science – the CTD, the rosette, nets, corers, and even remotely operated vehicles (ROVs) – cannot be used from this platform. Apparently the only things that you can actually do is mount sensors to the hull and look at stuff through the windows. That’s not enough. Even hull-mounted sensors like acoustics need to be tested by actually catching animals in the ocean.
So I can prove that I’m not a hater, let me take a step back and explain why your average research vessel is structured the way it is. Here’s a photo of a ship I know well, Scripps’ medium-sized vessel, the R/V New Horizon. 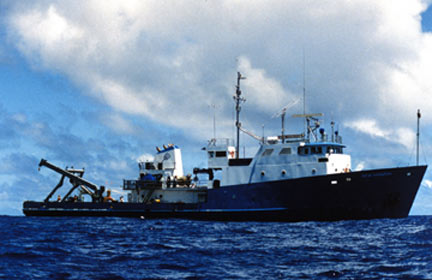 On the left side, you’ll notice that the ship’s stern is a large flattened area. That is called the “fantail.” Here’s a closer look: 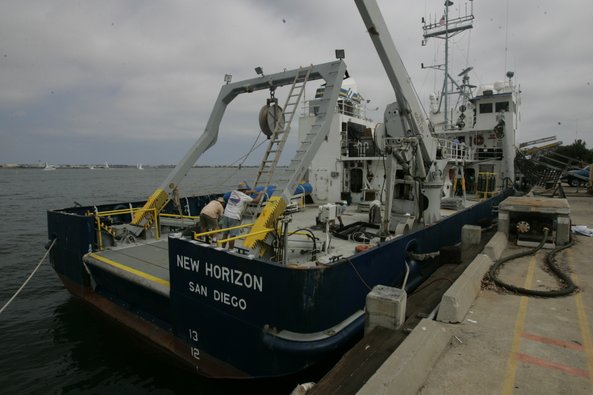 The fantail is used for storing, deploying, and retrieving equipment. Here, you see the New Horizon‘s A-frame – the rectangular structure – as well as the crane extending off the top of the photo. The third major piece of hydraulics, the J-frame, is located forward on the starboard side and is hard to see in this photo. When you want to deploy or retrieve something, you hook it up to the wire and lift it using one of these three pieces of equipment. Here’s Scripps researchers deploying the Oozeki midwater trawl through the New Horizon’s A-frame. You can imagine that a net of that size would be impossible to lift or maneuver by hand, especially in heavy seas. That’s why research vessels have this huge flat space with heavy equipment – the fantail is an adaptable base of operations to do whatever needs to be done. 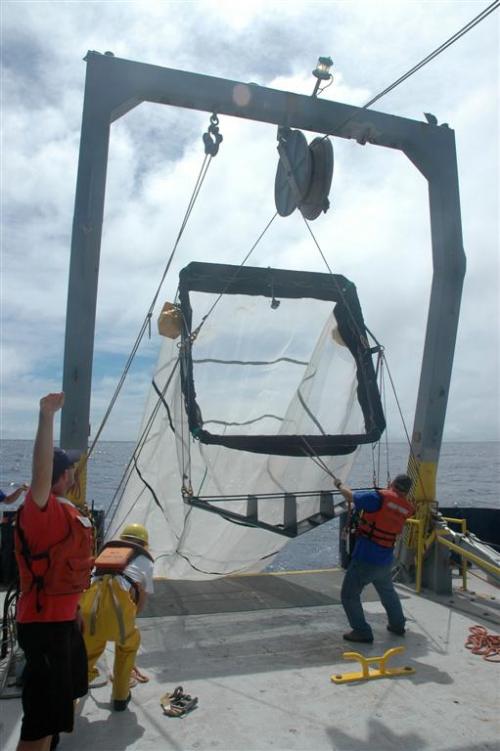 I’m not claiming that the standard tools are perfect tools. They are a tiny snapsnot of a very complicated world. MBARI’s work with remotely operated vehicles in the deep sea has shown how wonderful and informative it can be to see marine animals going about their business alive and well, not mangled in the cod end of a net. And viewing marine life from the SeaOrbiter’s underwater platform WOULD be pretty amazing. But you’re only going to be able to see the top 30 meters of the ocean, and animals big enough to BE seen. That means you’re going to miss all the zooplankton and small fish.
Also, any structure that sticks 20 meters into the air is going to have a powerful windage. The SeaOrbiter is going to move relative to the water if there’s any wind at all. Small marine animals or those that can’t swim against a current (like jellyfish) are going to be blowing right by those undersea observation windows like they’re in a hurricane. So observations in the open sea are going to be limited to the relative minority of large, fast-swimming animals that like to hang around huge man-made structure. I’m sure you’ll be able to learn a lot about mahi-mahi behavior, but $52.7 million is a heck of an investment for mahi-mahi. Perhaps the SeaObserver will be deployed in coastal areas with more life in shallow water – but then it can’t drift with the currents like the website says, lest it run aground.

This brings me to the final puzzlement of the SeaObserver – how will it be resupplied? It cannot dock, since most ports are not 30 meters/90 feet deep. For example, San Diego Bay, a major military port that houses aircraft carriers and other large vessels, is dredged to maximum depth of 13 meters/42 feet. SeaOrbiter cannot be resupplied at sea, since it has no deck to put the supplies on, or crane with which to move them. How on earth will it actually function? There is no explanation on the website that I could find, though admittedly I found it hard to understand. Maybe there’s more on the French language part?

While it’s easy to be seduced by beautiful, futuristic design of SeaOrbiter (I know I am! It would be like living on the Enterprise!), the actual user base of this platform is supposedly ocean scientists. So I’d really like to hear from any scientists who have further knowledge of how SeaOrbiter can be used. In a time where many research vessels are being mothballed, it’s important that this huge investment in ocean science actually be something that is actually useful, and not just a sleek publicity stunt.