Last week, a clam video went viral. (Get your mind out of the gutter, internet! I mean a bivalve! A mollusc! A lamellibranch!)

For people who know how clams actually live, the misconceptions of this video are obvious. That’s not the clam’s tongue, that’s its foot. The clam is trying to use its foot to burrow into the table and escape. (Here’s a video showing a clam using its foot to launch itself away from a predatory sea star (via Chris Mah), and here’s a video of a clam using its foot to burrow in the soft sea floor.) For people in the know, it can be easy to be scornful of a public so ignorant that they think clams lick salt. But that’s the wrong reaction.

First, it was perfectly reasonable for most people to think that this appendage was a tongue. Think about how bivalves are portrayed in cartoons. Here’s a bunch: 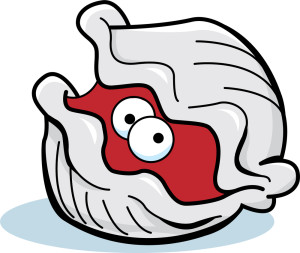 Oyster with pearl cartoon from Shutterstock 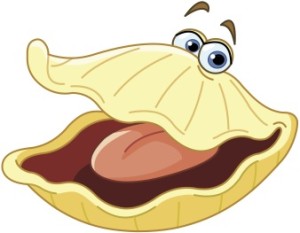 Yeah. They don’t have eyes, either.

Second, the “clam licking salt” video was a golden opportunity to teach a huge number of people a little bit about how invertebrates actually work. The video has been viewed over 1.7 million times – how often do that many people care about ANY aspect of ocean science? So when io9 contacted me to ask what was going on in the video, I was happy to talk to them. And when the io9 post lead to the Huffington Post and Daily Mail also contacting me for information, I talked to them too. Getting cool scientific information out to interested people is why we do this whole damn blog, after all. Here’s a selection of comments from the HuffPo piece:

Man, that looks freaking. I never saw anything like that before. WOW, Thumbs up. [link]

awwwww.. it was looking for water and like the article said a anyplace but on a table with salt and no water. I tell you people …….More should read about the world around them and how it operates. People spent lifetimes to get that information to you [link]

I do feel a little ashamed about being the media point person for this story. After all, I haven’t “earned” it – while I do work with marine invertebrates, I am not a bivalve specialist. I had to resist to the urge to pass the journalists off to someone who really was a clam expert. I didn’t do so for two reasons: 1) I am sufficiently knowledgable to confidently address what was going on in this video, When I didn’t know the answer, like what species of clam was on the table, I simply said so. 2) Woody Allen said, “Eighty percent of success is showing up.” I was already talking to these journalists, and I wanted to get correct scientific information out to their readers. This is especially important for publications like the HuffPo and the Daily Mail, which are….not consistently focused on the best available science.

I encourage my fellow scientists to take advantage of opportunities like this. Viral videos about things like clam anatomy don’t come around every day – most people’s interest in clams begins with white wine and ends with butter. If this kind of opportunity comes your way, don’t be afraid to address it if you know the answer, even if it’s not your particular subspecialty. I’ll leave you with this inspirational and classic documentary on the importance of molluscs (make sure you make it to 2:45!):

11 Replies to “Secrets of the clam tongue: a case study in opportunistic science outreach”